Ex-NHLer says his father, not David Frost, was the target in his failed murder-for-hire plot 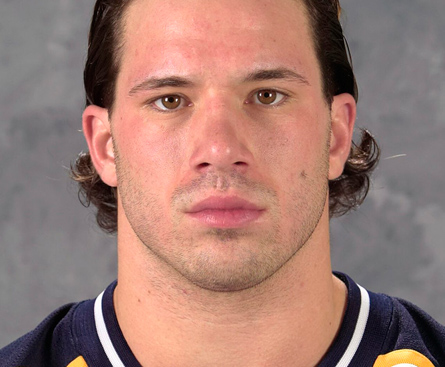 Mike Danton, the former NHL player jailed for plotting to murder his agent, won full parole today after providing his first-ever public accounting of the saga—including the stunning claim that he’d intended to kill his father, not the agent David Frost, all along.

The revelation came during a parole hearing in which Danton, now 28, poured out his heart, accusing his father of physically abusing him when Danton was a child. He also described a spiral of womanizing and prescription drug use while playing with the St. Louis Blues in 2004, shortly before he was arrested. “I just wanted to get rid of the paranoia and fear that I had at that time,” he said during the hearing at Pittsburgh Institution, located about 15 km north of Kingston. “I wasn’t looking into the future. I was in the present and I wanted to get rid of the thing that, to me, was instigating these fears.”

Danton pleaded guilty in 2004 of conspiring to commit murder, after trying to hire a hit man to go to his apartment and kill the person inside. He was sentenced to seven years in a U.S. prison but was transferred in March to Canada to serve the rest of his sentence.

Police and prosecutors in Missouri have always regarded Frost as the intended victim of the hit, as he was the only person in the apartment at the time. However, Frost had claimed in a previous court proceeding that Steve Jefferson, Danton’s father, was the target. Danton corroborated that version today before a two-person panel of the national parole board. But he didn’t seem overly eager to do so. “The victim turned out to be Mr. Frost,” he said cryptically. “But he wasn’t the intended victim.” When pressed by a board member to be more specific, Danton conceded that the intended victim was his father.

It was the only phase of the hearing in which the former player showed discomfort. With a shaved head and wearing a striped, button-down shirt, Danton sat upright and spoke for most part with ease and clarity, alleging that years of physical abuse at the hands of his father in Brampton, Ont. had left him unable to trust other people.

His memories of that time, he says, include dinner plates flying across the kitchen and, allegedly, heavy use of marijuana by his parents. Hockey was mainly a chore before he met Frost, who became his coach and mentor, he added. “There was no reward. Whether I played well or not, there’d be no reward. I’d have abuse no matter what.”

Throughout the hearing, Danton referred to his parents not as his father and mother, but by their first names, Steve and Sue. Danton has been estranged from them since his early teens, and had his last name changed years ago.

When reached by phone today, Steve Jefferson fully denied the allegations: “I mean, I’ve got another son and I can’t get him to leave home. He’s nearly 23 years old. I never abused Michael.”

Danton said these recollections of his childhood—combined with a sleepless lifestyle fueled by prescription stimulants, painkillers and long nights at strip clubs—left him paranoid during his time St. Louis. “I believed at the time that someone was coming from Canada to kill me … that’s where my head was at,” he said. “I obviously wasn’t thinking clearly.”

But Danton added that his time in prison helped him change, an assessment born out by reports from both U.S. and Canadian corrections officials describing Danton as a model prisoner who tutored other inmates and worked to improve life inside.

These glowing reviews were enough to get Danton full parole. The panel also appeared to accept his account of the attempted hit as a plot against his father. “You’ve provided an explanation for what happened that night that the board finds reasonable given all the circumstances at that time,” said panel member Michael Crowley. The board members also seemed unfazed by the fact Danton appears to remain in frequent contact with Frost. They ordered Danton not to have “face-to-face contact” with Frost. But the two can speak on the phone and might even meet in person if the encounter is approved by his parole officer.

In his time as a junior coach, Frost’s seemingly obsessive control over Danton and other players, and involvement in their personal lives, got him into trouble. He was charged with assault and received a conditional discharge in 1997 after punching a player in the face. Last year, he was acquitted on sexual exploitation charges after it emerged that players for his team at that time, the Quinte Hawks, had engaged in group sex with local girls while Frost had been in the room. Three players who were supposed to be victims in the case actually testified for Frost at his trial, saying he hadn’t been involved in the sex.

Still, given Danton’s testimony today, the parole board appeared more concerned about Danton having contact with Steve Jefferson than Frost. They prohibited him from having any contact whatsoever with his father. “With me?” says Jefferson. “Why’s he not allowed to see me? I can’t believe the court system in this country. It’s sick.”

Media were not allowed to hear Danton’s release plans. But he did say he hopes to start a family, and to play professional hockey again. Playing in the NHL would require Danton to obtain a dispensation from the parole board to leave the country—something Crowley warned Danton he can’t see happening.

Failing that, Danton said he might like to work with kids as a teacher or a coach. “I just ask you for the opportunity to return to a normal life,” he said, “to become a productive member of society and be successful in some way, shape or form, whatever that may be.”