It was 4:30 on a cold April afternoon when Darryl Kelly, the 25-year-old principal of Howley Elementary School in the tiny community of Deer Lake, N.L., heard a peculiar series of footsteps outside his office. The sound evoked the memory of the one-legged janitor who’d walked the small school’s hall when Darryl was a child. When he looked up from his desk, there were two young men in the doorway. “Hi,” one said, “my name is Terry Fox, and I’m running across Canada to raise money for cancer.”

Darryl, who could vaguely recall seeing something on TV about the Marathon of Hope, chatted with Terry and his friend, Doug Alward. They were looking for a shower; the school didn’t have one, he told them, but they were welcome to take a bath at his place. So the guests followed Darryl home in their beige Ford Econoline van. “We got company for dinner,” Darryl remembers saying to his wife as he walked Terry and Doug in his front door. Caught by surprise, his wife exclaimed, “All I got is hot dogs.” Terry’s response: “I’d love to have a hot dog.”

FROM THE ARCHIVES: Maclean’s reports on the agonies and ecstasies of Terry Fox’s Marathon of Hope

During supper, some of Darryl’s neighbours noticed the van and showed up at his door to donate money. “You’re running across Canada?” Darryl remembers his great-uncle saying to Terry. “I haven’t got the nerve to drive across Canada!” After dinner, Terry used Darryl’s phone to call his mother—“But Mom, I’m okay. People are really good to me here. Don’t worry”—and agreed to speak to a 4-H youth group that Darryl led at the school. “There were about 100 kids,” Darryl recalls. “He told them his story and why he was running and showed them his leg. They were amazed.”

Darryl invited Terry to stay the night, but, eager to hit the road early, his guest politely declined. “You know the way people are: have breakfast, have a cup of tea, have a chat,” Darryl says. “He was too focused for that.” As Terry moved westward through the province, Darryl called his relatives in other towns to help arrange accommodations. He watched as the Marathon of Hope gained renown: “He was meeting the prime minister. He was meeting hockey players,” he remembers. “Then, of course, the sadness came. I’m shivering a bit because I can picture him on TV on a stretcher, talking about how he’s got to take a break because the cancer’s back.” 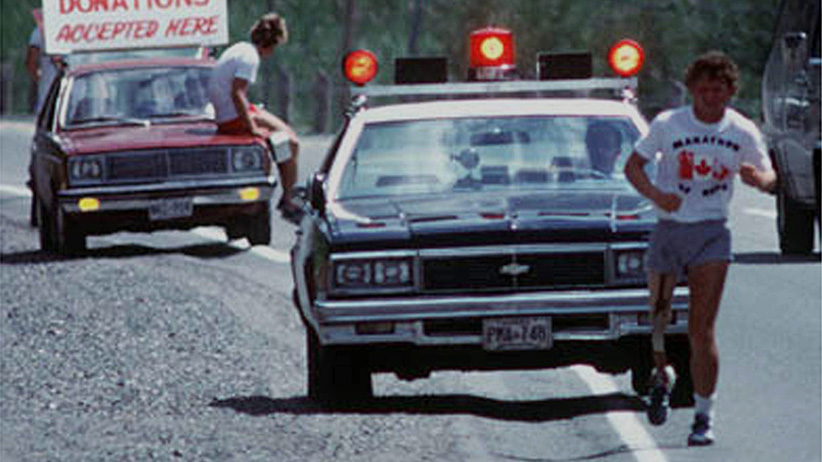 In the Marathon of Hope, Fox ran from St. John’s to Thunder Bay. (CP)

Terry died on June 28, 1981, but Darryl did his bit to make sure his story never did. During 31 years as a teacher, vice-principal and principal, he’s told the tale to many students. He met Terry’s family on the 10th and 30th anniversaries of the run. Even after getting heavily involved with the community—he became mayor of Deer Lake, and an MHA during the premiership of Danny Williams—Darryl says, “Of everything I’ve done, it’s probably the thing that sticks in my mind the most. I don’t think I’ve ever met another individual like him.” — Luc Rinaldi