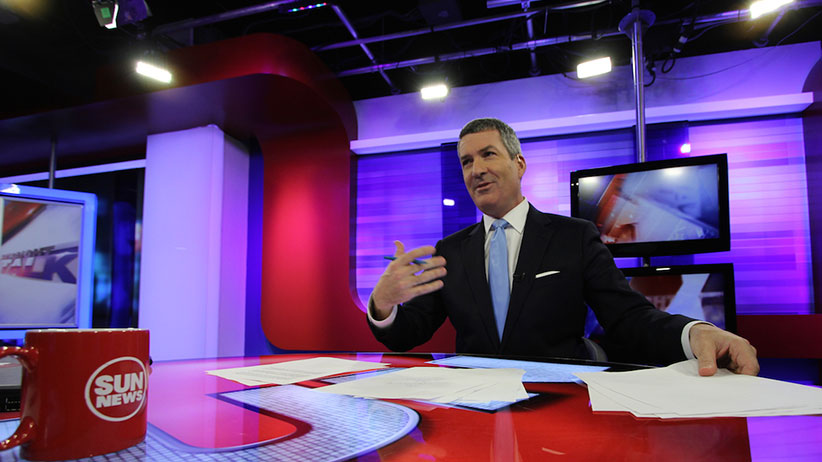 Yes, some of it bugged me.

Ezra Levant would do this or say that and my life as the straight-up political journalist at the now-defunct Sun News Network would become very difficult. Case in point: Ezra vs. Justin Trudeau et al.

But Ezra, Brian Lilley, Michael Coren and I—the four prime-time hosts on the network—operated for the last four years on the general principle that, no matter how much we might disagree with each other, there were to be no public spats between us. My job was the button-downed “hard news” straight man. It was their job to bring in the crowds, and they would have to break some eggs to bake the cake that would feed us all.

I ignored demands often made of me by readers and viewers of my work that I answer for the work of Ezra, Brian or Michael. It was their work, not mine. And I trust they ignored similar demands made of them when I said “unconservative” things or reported on facts that may have been inconvenient to a conservative narrative of the world.

My daily hour used to follow Ezra’s daily hour. Viewers who had just finished Ezra’s high-octane performance would stare at me for a few minutes, then send off e-mail blasts denouncing me as boring and comparing my work to what they could see on CBC. (I took that as a compliment, although I don’t think it was intended that way.)

And, truth be told, I often giggled at Ezra’s chutzpah and sometimes wished I had the certainty of the truths he proclaimed.

I was signed up by Kory Teneycke, the former top aide to Prime Minister Stephen Harper. He never asked about my politics. Maybe he thought I was a conservative, based on my Parliament Hill reporting for CTV, and the also now-defunct, Canwest News Service. I never asked him. But if so, he saw something Jack Layton did not, since, while I was being wooed to work for Sun, the late NDP leader asked me to join his inner circle of advisers and, maybe one day, run as his candidate. Flattered, I told him I preferred being a reporter.

On our launch and after, everyone paid most attention to Ezra and Brian and little to the comprehensive political coverage I led. That pattern continued in the post-mortems I read over the weekend. Critics wanting something to object to about our network found their preferred target where they wanted it. Fair enough. But notes I’ve received in the last few days from former party leaders, elected officials, political operatives, pollsters and volunteer riding associations—from many different parties at both the national and provincial levels—saying how much they appreciated the attention we paid to the nitty gritty of races that get no national coverage suggests to me that there was, and still is, an interest in the kind of programming we provided.

Federal New Democrats, in particular, seemed thankful that a national news network was taking them as seriously as other national networks take federal Conservatives or federal Liberals. We went live-to-air across the country with broadcasts of each of the three national conventions they held during our existence. CBC News Network was the only other national network to provide substantial live programming at all three.

When the Liberal Party of Canada was choosing its new leader through the winter and spring of 2013, it held several debates across the country. Justin Trudeau, of course, prevailed, and now has a very good chance to be the prime minister. And yet, despite the stakes of that contest, CBC did not air all of those debates. We did, though. Every one of them, from start to finish, unedited and without commentary, live-to air across the country.

Emerging parties—be it the Alberta Party in that province or the Freedom Party in Ontario—got attention from us that we were told they were not getting from any other national news network to explain their policies and be challenged on them.

There was no mention of this in any of the Sun News Network post-mortems, nor of our wire-to-wire coverage of one federal election, one presidential election, nine provincial elections, nine federal and provincial party leaderships, five big-city mayors’ races, plus a handful of by-election races. Sun News reporters and cameras were on each of the main campaign buses for the duration of the federal and all nine provincial elections. I anchored at least a dozen results shows, where we stayed on-air across the country from polls closing until the final speech. When shots were fired at former Quebec premier Pauline Marois’s headquarters, we were live-to-air across the country for that. Others were not.

We were live to-air across the country to report the results of the Oct. 27 municipal elections in Ontario and, then, as it became clear that John Tory would win Toronto, we kept right on going through two time zones and brought live-to-air across-the-country results of four Alberta by-elections. Sure, it was a bit schizophrenic, mixing in a post-election interview with second-place Toronto finisher Doug Ford, while watching the early returns from Alberta. But Jim Prentice’s Progressive Conservatives would sweep those contests, and they became the precipitating event for Wildrose leader Danielle Smith’s historic floor-crossing. Important news. And we were all over it.

Scott Gilmore: We need more discordant voices in the media

Doing all this, covering campaigns—covering the news—cost Quebecor, our parent and investor, a lot of money. I am grateful for the millions they sunk into the operation and the significant faith shown in my work. Could we have used another satellite truck? Better sets? Of course.

But, please, let’s not continue the fiction we did no news.

In addition to our coverage of multiple Canadian elections, Quebecor spent considerable sums to report from overseas.

I, for one, reported on Harper’s activities during trips to Beijing, Hong Kong, Perth, Manila, Singapore, Los Cabos, St. Petersburg, Vladivostok, London, Paris, Dublin and the United Nations. I’m sure I’m missing a few spots. Each of those trips cost us (and every broadcaster along for the ride) tens of thousands of dollars.

It’s a fact not reported often enough, but, when prime ministers travel or when leaders travel in their campaign buses during an election, news organizations pay their own way. The travel is not free.

I was sent to Berlin for 24 hours while the hunt was on for Luka Magnotta. I was sent to Rome for a couple of weeks to cover the election of Pope Francis. News, folks, news! And I’m glad Sun picked me to report it.

Just before our launch, Sun News sent me to Tahrir Square to cover the Arab Spring. There, I and a TVA cameraman were detained by Egyptian secret police. We were apprehended by thugs who held machetes to our chests before leading us to our mercifully brief interrogation.

When Harper went to the the Middle East last spring, Sun News put me on the plane to report what he did in Jerusalem and Ramallah. We went to Jordan, where I saw the Petra Treasury by candlelight at midnight. Incredibly beautiful. More beautiful: The next day, on the border with Syria at a refugee camp, I met—and reported on—three-year-old Fidaa and her five-year-old cousin Safeia, freshly fled from Homs. I wonder how they’re doing.

I am proud of the commitment we made to covering the work of the country’s political class. I’m also proud of the mostly young reporters and producers who provided my show with excellent daily election coverage.

We were not trying to replace incumbent news networks. There was no business plan I was ever aware of that included stealing viewers from CBC or CTV or anyone else. We would find our audience by doing news that no one else was doing and now, sadly, no one at all is doing that.

David Akin spent a decade covering Bay Street for the National Post, the Globe and Mail and CTV, and has spent the last decade on Parliament Hill, most recently as Sun Media’s national bureau chief. His contact information is at  www.davidakin.com.