Do police need a warrant in a public restroom? 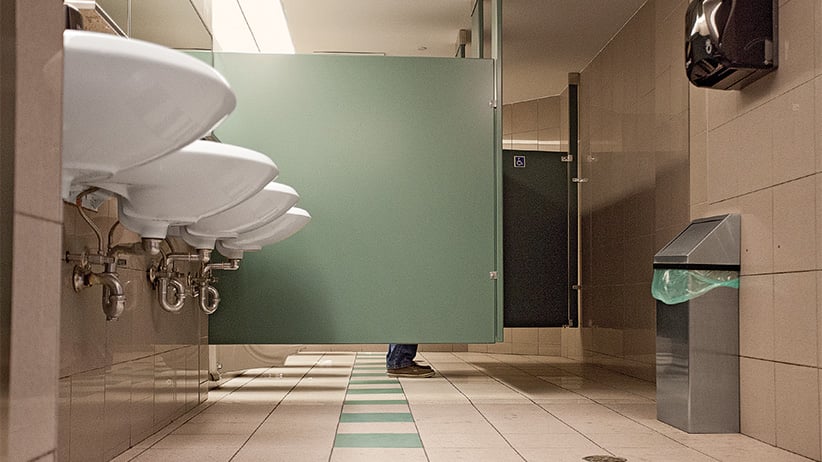 Man in a public washroom. (Photograph by Natalie Castellino)

The 911 call was pretty vague: something about a strange man loitering near a shopping plaza in Mississauga, Ont. It was last June, a Thursday afternoon, and the responding police officer did not immediately spot anyone who matched the description. Only when the cop walked into a restaurant bathroom did he notice something suspicious: two shoes at the bottom of a toilet stall—both feet facing a side wall, not the front door. As a judge later recounted the scene, the “occupant’s pants were up, or at least not down by his ankles.”

He wasn’t sitting down, in other words.

“Hey, it’s the police,” the officer announced. “Open the door.” After 10 seconds passed with no response, the constable opened it himself. Standing inside the cubicle, with a syringe and some drugs, was 25-year-old Andrezej Wegner. He was promptly charged with possession of cocaine and heroin.

Come trial, Wegner’s case hinged on the obvious question: Do police have the authority to barge into public bathroom stalls without a warrant? Canadian courts (believe it or not) have repeatedly examined that constitutional question, and the case law is clear: Anyone inside a toilet cubicle enjoys a “reasonable expectation of privacy” against state intrusion. Wegner’s lawyer advanced the same argument: that the officer breached his client’s Section 8 Charter right (prohibiting unreasonable search and seizure), and that all the drug evidence should be excluded as a result.

The judge’s conclusion? As court rulings go, it is certainly worth the read—wherever you’re sitting.

“I think it is useful to put some public-interest perspective on this case as it is too easy to fall prey to an immediate visceral reaction that police have no business at all intruding on this most private of areas and conducting warrantless searches in the toilet stalls of the nation,” writes Justice Bruce Duncan, who serves on the provincial court in Brampton. “It is not that simple.”

Related: The dangers of drunk parking

Duncan agreed with the established case law. “There can be few places where, at least subjectively, expectation of privacy is higher—and intrusion of the state more offensive—than in a toilet cubicle,” he writes. He also agreed that the officer violated Wegner’s Charter right because there was no pressing need to open that door. The cop was not “operating in an emergency situation,” Duncan said, nor did he have any proof that drugs were being used. “Under these circumstances, was it justifiable for him to open the stall door?” he asks. “I am not satisfied that it was.”

But does that mean all the evidence should be tossed out? No, the judge says.

“Had the defendant gone to shoot up in any other enclosed space in the [restaurant]—for example, a storage closet—there could be no credible argument advanced that he had a [reasonable expectation of privacy] and no constitutional issue would arise by the police officer opening the closet door,” the ruling continues. “The only difference between that situation and the present one is that he went into a space that other people use for private personal functions . . . While the law permits him to claim constitutional protection on the coattails of the privacy interests of others, it need not be so generous when it comes to the question of exclusion.”

Although the average Canadian likely doesn’t know it, judges have wide discretion to decide whether evidence obtained via Charter breach should be thrown out of court. Exclusion is not automatic, and judges must weigh numerous factors, including the seriousness of the constitutional violation and the impact on the accused. On both fronts, Duncan sided with the prosecution.

“This was not some jackbooted knock-down of the privy door,” he writes. “It was a single police officer following a low-level investigation who came across a situation that raised his suspicion and concern.” As for the impact on Wegner’s Charter rights, Duncan believes it was “minimal.” (Citing specific news reports about needles being left behind in public washrooms, the judge also says, “There is a real public interest” in curbing such activity, and that “these concerns should be kept in mind when considering whether admission of the evidence would bring the administration of justice into disrepute.”)

With the evidence admissible, Wegner was convicted on April 22 and sentenced to time served (15 days). His lawyer is appealing.

“I have enormous respect for the particular justice involved, but I think he got this one wrong,” says Edward Royle, whose Toronto firm represents Wegner. “He focuses on a distinction between people who are engaging in unlawful activity in a toilet cubicle, and people who are engaged in lawful activity. But the point is: It is everybody who has to be protected from this kind of intrusion.”

A date for the appeal has not been set.

“It is an interesting case,” says Don Stuart, a Queen’s University law professor. “I think some other judges might have excluded the evidence, but this particular one did not—and he gave reasons for doing it. It is within his powers to make that discretionary call.”