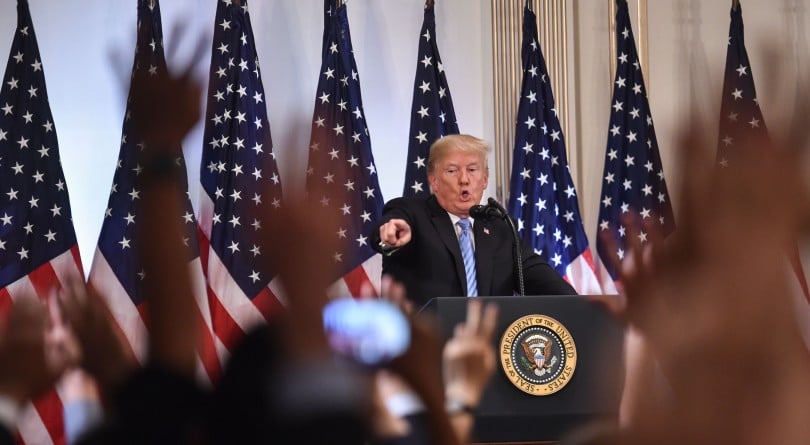 US President Donald Trump speaks during a press conference on September 26, 2018, on the sidelines of the United Nations General Assembly (UNGA) in New York. (Photo by NICHOLAS KAMM/AFP/Getty Images)

Like clockwork, the president of the United States unleashed yet another tirade aimed at Canada on Wednesday. (Canadian Press)

But even by the standards of Donald Trump’s earlier attacks, his meandering UN press conference was over the top. He claimed to have rejected a request by Trudeau for a one-on-one meeting, even though officials with the Prime Minister’s Office said no request was ever made. Trump tried to make chopped liver of Chrystia Freeland, saying, “We don’t like their representative very much.” And of course there was the obligatory threat to slap “billions and billions” of dollars in tariffs on imports of Canadian cars and auto parts. (The Washington Post has a full transcript of Trump’s word-salad press conference here.)

Tweeted former U.S. ambassador to Canada Bruce Heyman: “Of all the things @realDonaldTrump said about Canada and it’s government officials today very little of it was truthful.” (Twitter)

What are the odds of a NAFTA 2.0 deal getting done by this weekend’s deadline? On a scale of one to 10, Canada’s ambassador to the U.S. gives it a five. (Global News)

A vote to strip Aung San Suu Kyi of her honorary Canadian citizenship took a step forward. Trudeau says he is open to such a debate: “That’s one of the questions that certainly Parliament can reflect on. It was Parliament that granted her honorary citizenship, and that’s a conversation that we certainly could have.” (Canadian Press)

Freeland went to the UN this week hoping to smooth relations with Saudi Arabia, after that country went berserk over her tweet calling for the release of two jailed human rights activists. A resolution in the diplomatic spat looks as far off as ever. “What are we? A banana republic? Would any country accept this?” said Saudi Foreign Minister Adel al-Jubeir. “You owe us an apology. It is very easy to fix—apologize, say you made a mistake.” (Bloomberg)

A day after Public Safety Minister Ralph Goodale defended the transfer of child killer Terri-Lynne McClintic to an Indigenous healing lodge as the best way to “rectify her bad practices,” Goodale reversed course and ordered a review of the transfer, though he is clinging to the argument that politicians can’t overturn prisoner security classifications.(Global News)

The decision came as Trudeau hurried back from New York to handle the government’s defence in an emotionally charged day of debate. As Conservative MPs read out gruesome details of the 2009 rape and murder of eight-year-old Tori Stafford, Trudeau accused the opposition of trying to “politicize” her death. But with Trudeau sounding increasingly flustered in the House, the National Post’s John Ivison couldn’t help but wonder if the Prime Minister was “secretly ashamed of the line he was peddling … No father or mother could not be moved by this case, which explains why emotions ran so high in the House. But this was so clearly a bad decision, so at odds with Canadians’ sense of natural justice, that the Liberal response ought to have been less equivocal.” (National Post)

Ontario Premier Doug Ford seems ill-suited to the methodical, lawyerly business of public administration, and his rash decisions and ham-handed moves since taking office have brought on a slew of lawsuits, for which everyone in Ontario is ultimately liable, writes Stephen Maher. (Maclean’s)

Julie Payette likes her job. No, seriously. In her first interview since a series of reports exposed frustration on the part of government officials and charitable organizations with Canada’s Governor General, Payette told a French-language interviewer that she is “really very proud” of the work she’s done. But she also apologized for how long its taken her office to review which charities she will work with. (National Post)