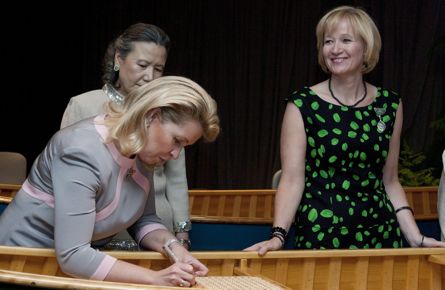 As anyone familiar with Ontario cottage country knows, the “Muskoka Experience” usually involves a burger with onion rings from Webers on Highway 11, hours of sitting in molasses traffic and the frustration of navigating the packed parking lot of the Port Carling IGA. Yet these traditional activities were totally absent from the “Muskoka Experience” served up during the first official “spousal” activity of the G20 weekend—one that set the predictable low-on-substance tone.

The first clue? Muskoka itself was absent. Not that we should be surprised. As summit spokesperson Beatrice Fenelon told one media outlet last week, security logistics made it impossible to provide a separate “spousal program” at the G8 gathering in Huntsville where more serious stuff is on the schedule. As she put it: “The G8 is primarily a business meeting.”

Nor did the “Muskoka Experience” feature a virtual tour of the region to showcase Canada’s technological acumen—and possibly even show off Goldie Hawn’s and Martin Short’s million-dollar cottages! Instead, eight of the twenty G20 spouses, among them host Laureen Harper, Nabuko Kan of Japan, and Dame Patience Goodluck Johnathan of Nigeria, learned about the intricacies of moccasin beading from Algonquin aboriginal artists followed by a demonstration by a master canoe craftsperson in a slightly less rustic setting: the Royal York Hotel. The women signed their names to a green, cedar-strip canoe and were given a Martha Stewart moment as they tried their hands at canoe ribbing and seat caning.

After that, the group, minus Michelle Obama, sat down to a “Flavours of Muskoka” lunch of “chilled Muskoka strawberry soup with peppered organic cream and drunken berries” followed by “freshwater pickerel fillet with nasturtium butter and fennel pollen, cauliflower puree, dill-braised carrots, sweet summer pea emulsion.” For dessert: an “Algonquin canoe filled with mascarpone cranberry mousse” and a “chocolate canoe paddle.” To wash it all down there was a 2009 cabernet rose from 13th Street Winery in the Niagara region of Ontario.

Thank goodness for the numbing power of vino. For, as delicious as the food all sounds, the calculated political correctness of the exercise must have been difficult to stomach. What makes the agenda particularly gauche is the summit’s alleged focus on maternal health with Stephen Harper’s contentious pledge of $1.1 billion in new spending in poor countries.

So instead of admiring the kind of beadwork routinely shipped offshore to Asia for costs, organizers could have brought in researcher Zhong-Cheng Luo of the University of Montreal whose extensive study on infant morality in Manitoba was published last weed in the Journal of Rural Health. It revealed the death rate for aboriginal babies is more than twice the Canadian average. More alarming, it showed that though infant mortality among non-aboriginals declined with proximity to cities, falling to 4.6 per 1,000, the infant mortality rate for aboriginal women stayed stubbornly high — almost 10 per 1,000, even in cities. This was an opportunity to point out clearly, there’s much work to be done, even in developed countries with the resources to stage a billion-dollar summit.

Of course, it’s probably naïve to suggest that substance be a part of the spousal agenda, one that will include a tour of the CN Tower and a brunch with PMO-annointed “Women of Distinction” on Sunday. Even in an age in which the term “wives” has been replaced with “spouses” and in which many political spouses have their own careers, they are still expected to endure sanitized, feel-good photo ops that have nothing to do with issues that matter. Tellingly, the two male G20 spouse—Joachim Sauer, husband to German chancellor Angela Merkel and Nestor Kirchner, who’s married to Argentine President Cristina Fernandez de Kirchner, are no shows, just as they were at last year’s G20 summit in Pittsburgh. (We can now add to that list the long-term boyfriend of Julia Gillard, Australia’s brand new PM, though that country sent its deputy PM in her place.) Nor are A-list political wives Carla Bruni Sarkozy or Samantha Cameron expected. Cameron has a great excuse: she’s about to start the third trimester of her pregnancy, which didn’t stop her from holidaying in Ibiza two weeks ago. Both are fashion trendsetters. Maybe they’re beginning another one here by saying “no” to the G20 spousal silliness.