Dwayne De Rosario, soccer star, on the origins of the 'shake 'n bake'

It’s called the “shake ‘n bake” and it has nothing to do with chicken. After scoring a goal, Dwayne De Rosario starts to sprint, but the body quickly decelerates to a robotic slow-motion pace. Every step is deliberate. The arms extend like a bird strutting down a sidewalk with swagger. “There’s some rhythm involved,” Dwayne laughs. “You got to have some old-school pop-and-lock breakdancing in your repertoire.” Then his teammates eventually catch up and smother him.

FROM THE ARCHIVES: In a 1998 Letter from Toronto, Maclean’s reports on the city’s “World Cup Fever”

While much has been written about Dwayne’s accomplishments as a professional, one article that stands—a story written about the Malvern Magic, a team in the Toronto suburb of Scarborough for which he played as a youngster. In an age when most Canadian teams were plagued with the simple, yet ineffective “kick-and-run” style of soccer—chasing balls up with long kicks—Dwayne’s team opted for short, smooth passes up the field. So someone in a local paper wrote an article about how, at the city’s annual charitable tournament, called the Robbie, the Malvern squad was “putting a shake and bake on this team,” Dwayne remembers. “It was one of those things that just stuck with me and I don’t know why.” It also led to the name of his goal-scoring dance, which he calls a tribute to all his former teammates as a kid growing up in Scarborough—talented and full of potential—who for reasons sometimes beyond their control never reached the same pinnacle in sport. 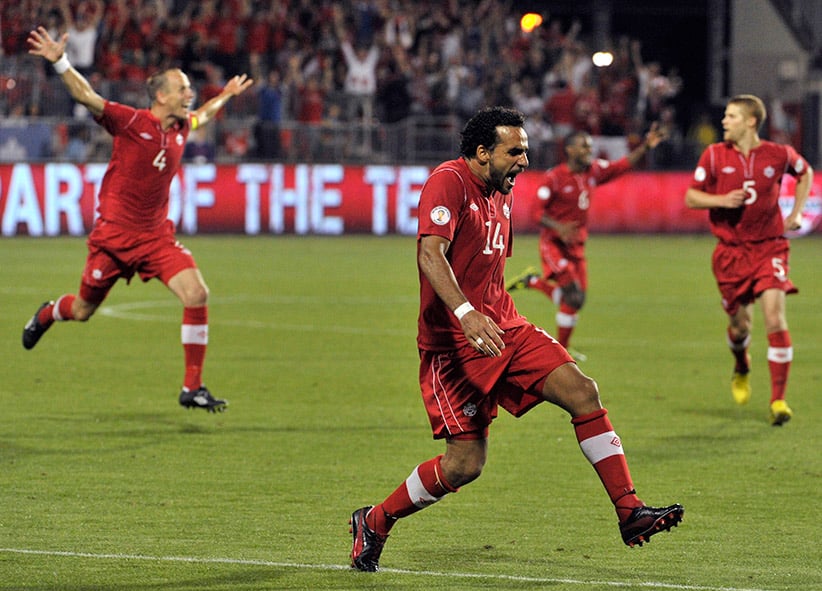 Dwayne was 17 and living at home when his aunt picked up the phone and passed it to him. He figured it must have been a wrong number: the national team wanted him to come try out for the team. He quickly made an impression. By 2000, Dwayne was part of Canada’s Gold Cup-winning squad, which remains perhaps the men’s national team’s greatest achievement. A year later, he started his first of 14 seasons in Major League Soccer (MLS), playing with five different clubs during that span. He retired in 2015 with 109 total goals, four MLS championships, MVP honours, and atop Toronto FC’s all-time leading scoring list.

It is widely known that soccer in Canada today has a greater participation rate among youth than hockey, but back when Dwayne started his professional soccer career in 1997, one would have been hard pressed to find a dome to play soccer in the wintertime, let alone stand among capacity crowds to watch the Montreal Impact or Vancouver Whitecaps. But as soccer emerged from an afterthought to a passion among many Canadian sports fans over the past 20 years, one constant has been a superstar wearing red and white—the man simply known as “DeRo.” — Aaron Hutchins