Those who think the pledging allegiance to the Queen is bothersome, or 'repulsive,' are forgetting something 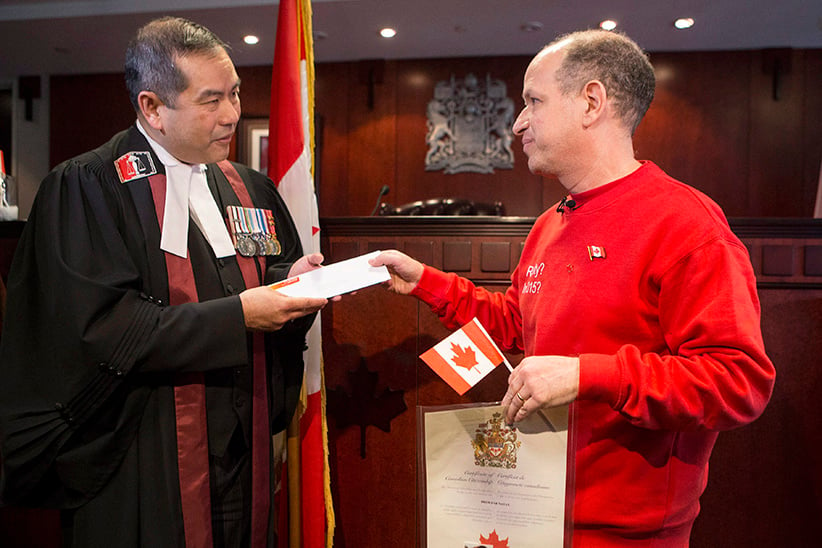 Dror Bar-Natan (right) hands a letter to Judge Albert Wong to disavow the portion of the oath that pertains to the Queen following a citizenship ceremony in Toronto on Monday November 30, 2015. (Chris Young/CP)

For anyone unlucky enough to be born elsewhere, there are a few steps to becoming a Canadian citizen. First you’ll need permanent resident status. Then there are age, language, tax and residency requirements. There’s also a test on Canadian history and values. After that, and if you’re not in jail, all that’s left is to show up on time for your citizenship ceremony and repeat the following:

“I swear (or affirm) that I will be faithful and bear true allegiance to Her Majesty Queen Elizabeth the Second, Queen of Canada, Her Heirs and Successors, and     that I will faithfully observe the laws of Canada and fulfill my duties as a Canadian citizen.”

This final step is proving to be the biggest challenge for some prospective citizens.

In Toronto this week, Israeli-born math professor Dror Bar-Natan became a Canadian citizen by reciting the prescribed oath. Immediately afterwards he took it back, handing the judge a letter stating, “I hereby completely disavow whatever I thought the first 25 words of the Citizenship Oath conveyed when I took the oath.”

It seems a rather graceless move, but recanting in this way does no actual damage to Bar-Natan’s citizenship status. So is ingratitude now a Canadian virtue?

Bar-Natan and two other objectors made headlines last year after launching a court challenge alleging Canada’s citizenship oath violated their rights. They claimed it required them to express personal fealty to Queen Elizabeth II, something they found “repulsive.” Ontario’s Court of Appeal ruled, however, that the oath is simply recognition of the particular structure of Canada’s democracy as a constitutional monarchy in which the “Queen is the symbolic apex.” Taking the oath is a promise to obey Canada’s laws and democratic traditions, and thus a requirement of citizenship.

Canada is an expansive and diverse country. That means there will always be cranks and grousers among us who disagree with accepted meanings and/or symbolic apexes. Fortunately for them, the obligations of citizenship in no way proscribe our freedom of expression. Any Canadian, native-born or naturalized, is free to advocate republicanism, seek to change the oath or promote the separation of the country, provided it’s done in a fair and democratic manner. Such freedom, the Ontario Court of Appeal observed in its ruling, even extends to personally disavowing the oath itself. It doesn’t get any freer than that.

In their original submission last year, Bar-Natan and his fellow complainers refused the possibility of recanting the oath, claiming “disavowal would be a public display of hypocrisy.” Given his actions this week, it seems Bar-Natan has had a change of heart. Or at least he isn’t so caught up in public displays of hypocrisy that he wants to become a citizen of another country. He’s even set up a website (Disavowal.ca) to encourage others to follow his path.

It would be easier to be annoyed with Bar-Natan’s hypocrisy if he was less effusive in his praise for his new homeland. “I’m definitely proud to be a Canadian,” he told the Canadian Press after the ceremony. “It’s a wonderful country, a truly wonderful country, with one small iota that I disagree with.” That said, Canada is not an à la carte proposition in which new citizens should be encouraged to sign up for the bits they like and ignore the rest. Anyone who finds the totality of Canadian democracy repulsive is welcome to seek comfort elsewhere. Perhaps in time Bar-Natan will come to realize the bothersome oath to Queen Elizabeth the Second that irks him is actually an essential component of Canada’s remarkable tradition of freedom, tolerance and diversity.

When Britain took control of Quebec following the 1759 Conquest, Canada’s “citizens”—the 70,000 or so habitants who suddenly found themselves British subjects—were initially required to take an anti-Catholic “Test Act” oath to vote or hold public office. Concern for the rights of his French-speaking, Catholic citizenry led Quebec governor Guy Carleton to replace this offensive religious obligation in 1774 with a uniquely Canadian compromise: a secular oath pledging allegiance instead to the Crown. This early expression of Canadian constitutionalism allowed the Canadiens to participate fully in society and guaranteed their freedom of religion.

Today’s oath is a direct descendant of Carleton’s innovation. It is a deliberate effort to mould an inclusive society out of diverse parts—and the very reason Bar-Natan can become a Canadian while at the same time expressing dissent, however sanctimoniously. We should be celebrating this remarkable history of toleration, not disavowing it.