Edmonton's 'awkward' response to the racism in its midst 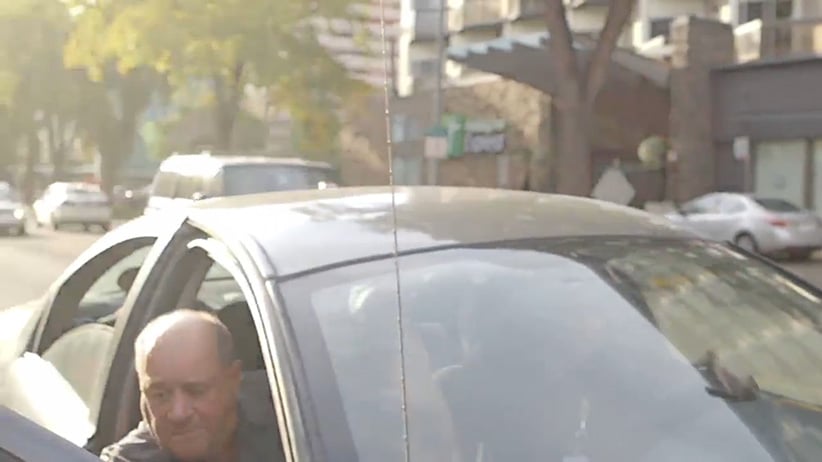 Edmonton actor Jesse Lipscombe confronts a man in a car who called out racial slurs while Lipscombe was filming a video.
(CP Video)

Jesse Lipscombe was filming a video about Edmonton’s beauty on a downtown corner when some sheer ugliness confronted him. From a car, some men yelled: “The n—-rs are coming, the n—-rs are coming.” With the camera rolling, the actor and former athlete approached the car and asked them to repeat the slurs to his face, or to explain themselves. The passengers denied that request, then urged him aside, yelling more as they drove off.

The morning after this show of explicit bigotry made its rounds on Facebook and news headlines, Mayor Don Iveson invited Lipscombe to City Hall to craft a response to racism in Edmonton. Inspired by Lipscombe’s bid to stand up for themselves, they came up with #MakeItAwkward. The nascent campaign urges residents to call out racism in their midst, whether it’s an epithet or casual—ask that uncle at a picnic about that racist joke, or don’t let slide that remark shouted from the nearby barstool. The idea has won praise from mayors across the country, and elicited online testimonials about confrontations people have made, or wish they had made.

Maclean’s spoke with Lipscombe and Iveson about this initiative.

Q: Aside from this publicity right now, what do you feel your confrontation yielded? They seemed to drive off in a huff.

Lipscombe: At the time, I’m not sure what I was actually looking for from them. It wasn’t a pre-meditated confrontation by any means. It’s not like anything I was saying was ever being absorbed, nor was there any remorse for the comment that he threw my way. So afterwards I was just left there, questioning what just happened. And at that time [my colleague said], “We got it all on tape, Jess.” I said great, please send me that tape. One, I want to kind of see what I did because it’s not like I have a clear memory of it because you’re obviously filled with emotion. But two, here’s a great example. Even though I may not have gotten an apology out of it, this is what’s happening in our city, and we can have a discussion about it.

Q: Do you expect or receive this sort of obviously blatant slur on a regular basis in Edmonton?

Lipscombe: I don’t walk out of my house expecting to hear that. It’s definitely jarring, without a doubt. It’s not completely shocking and surprising that happened, because it happens to other visible minorities, people with mental or physical disabilities or LGBTQ communities. It’s a thing we have unfortunately become desensitized to. Whether it’s as extreme as this or to a lesser degree, it does happen to you on a daily basis, to the point where it’s like—well, that’s just what it’s like living with being different.

Q: A lot of people will see this video and see the Ugly Albertan meme writ large. Inasmuch as Winnipeg has acknowledged its racism problems with its Aboriginal community, does Edmonton have a racism problem?

Iveson: I think as long as it exists in any community, to any degree, in this country, then it’s a broader issue than one city. That said, we have had two particular incidents directed at two younger black men in Edmonton, just within the last month or six weeks or so. There is a certain amount of this behaviour, a certain amount of this mindset, in the darker recesses of every community. It needs to be called what it is, which is vile and hateful. It’s starting a national conversation, which is probably long overdue. Because we do, as a country, have an awkward problem with a certain amount of racism in the hearts of I believe a small number of people, but I still believe we have to chase it out.

Q: Is this campaign about these blatant cases of people yelling out the N-word, or is it about the more subtle, ingrained racism that exists?

A: This could be at home at the dinner table. This can be at a bar with friends, or in a huddle in a football game. It’s where these things normally occur. And I’d say probably 80 per cent of the people involved wouldn’t approve of those comments, but also don’t know what to say because that’s a friend, and they already feel so awkward and they’d rather just move forward without having to say something. Now those people also have the tools to just say I’m going to make this a little awkward. I’m going to make that joke you tried to throw to the audience fail, just like when comedians do a joke and it fails it’s really awkward, but they strike that joke off their set list. That’s the hope.

Q: What’s a case of you having done this, having made it awkward or calling out somebody in a case where you could have let it slide?

A: I think more about the times when I was younger, when I was around my elders, people who I respect, who indulged in a bit of casual racism, most often toward Indigenous Canadians. And that has actually haunted me and inspired a lot of my work on reconciliation. I almost feel I need to make up for not speaking up then.

Q: Are we a society that confronts? In some situations, there’s a physical risk, especially with aggressors like those guys in the car. I’m reminded of a time I tried to separate a fight on Whyte Avenue, got knocked to the ground, and the dudes just kept on wailing on each other. Or, you look what happened on a farm in Saskatchewan a few weeks ago.

Lipscombe: We are a people that let the small things just go by because it’s a little uncomfortable and nobody wants to ruffle a feather. If you’re quiet and you’re watching it, you’re just as much at fault as the person there. You’re watching a victim be berated and you’re standing by, knowing that feeling in your gut that it’s wrong. Now you have a tool in order to change that.

Nobody’s asking anybody to put themselves in any kind of danger. Even my example of walking up to the car isn’t the kind of thing I expect people to do in some vigilante kind of style. I assessed the situation myself, and one should do that. The idea is just taking the wind out of those sails, but yes, standing up in times when it makes sense for you to do so in your own circles, which you know better than anyone else.

Iveson: Mainstream Canadians, what some might call the dominant culture, like to think this sort of thing doesn’t happen. It’s important to remind people that it does and that we have work to do to end it. 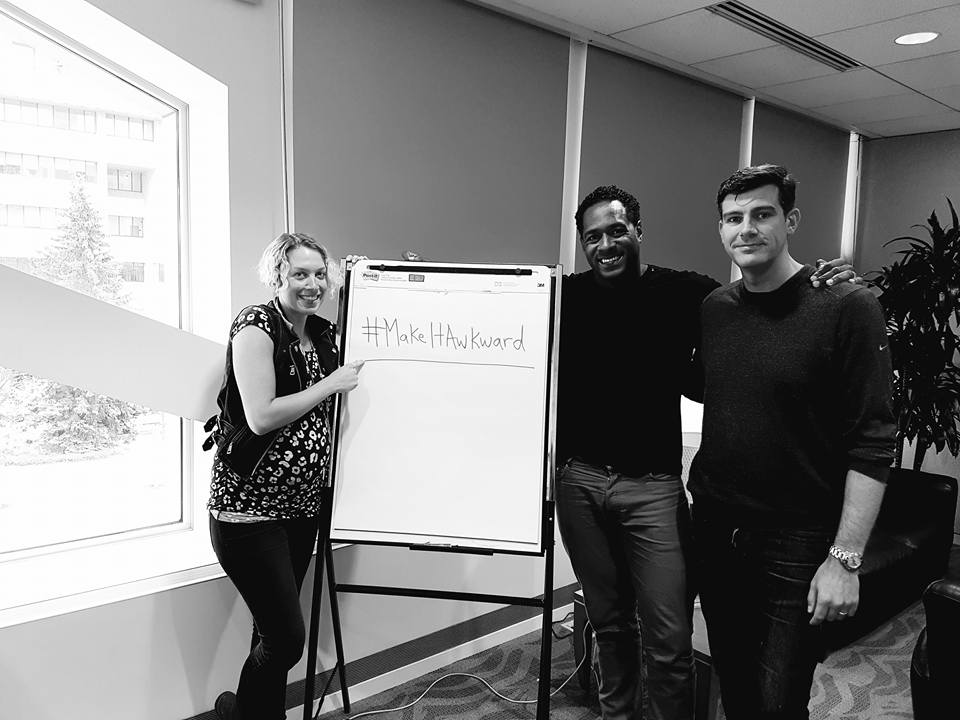 Q: The people whom you’re seeing express revulsion and outrage—are they as attuned to those smaller systemized manifestations of racism?

Lipscombe: Some people are completely in shock that something bad ever happened, and that’s its own kind of bubble. One of my best friends is a physician, and he said in the last five years he wasn’t aware of how I’m treated different than he is and the comments that come my way on a daily basis. We often talk about how I’m racially exhausted by this: the levels of explanation you have to give people. Not that their hearts aren’t in the right place.

Q: What are you going to do to make this more than a one-day story about a social media trend? There’s a good chance the guys in that car aren’t on Twitter, and maybe their cousins aren’t, either.

Iveson: We had a planning meeting today with some of my staff at City Hall, and Jesse and his partner, and mapped out this idea of Make it Awkward—for this to be at least dinner conversation tonight. As Jesse has noted, it’s back to school time. We both have school-aged kids and we want our kids to know they’re safe. Every kid is just a human being, and the labels come later. I’ve had some very preliminary correspondence with folks who work on initiatives like Racism Free Edmonton, and some of our immigration settlement projects and our Indigenous relationships about how to come together to support this campaign and potentially use digital technology and film-making, since Jesse’s a film and digital guy.

Q: You were shooting a video on why Edmonton is great when that car came by. How are you left feeling about Edmonton after this episode?

Lipscombe: Do I feel differently about Edmonton? One hundred per cent, yes. The level of support when an injustice was shown was unbelievable. The support and the lack of shyness to show a stranger—people saying, “We care about you, I love you, I’ve been able to talk about things with my children I haven’t been able to because of your video.” I’m a prouder Edmontonian than I was a few days ago, and the fact that Don stepped up—and the speed [with which] he stepped up—reinforces my decision to stay and be here and create, and make it a little better than it was yesterday.