Ottawa has a transformative new light rail system, with a pretty big glitch. And commuters suddenly have a whole new kind of headache. 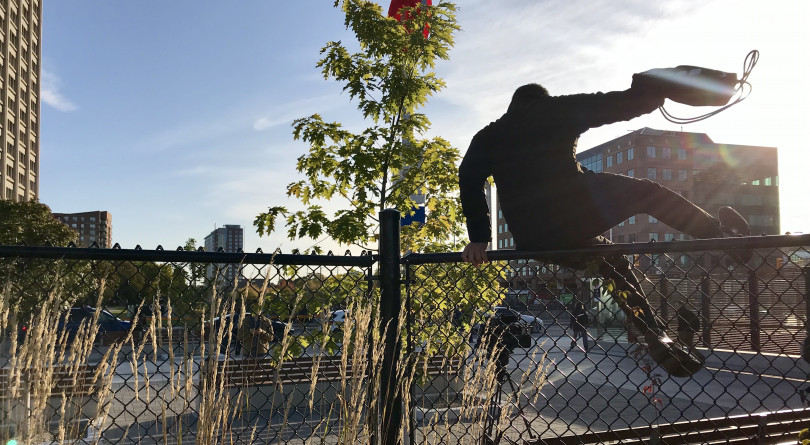 You know when you take the snow tires off your car too soon, and then there’s a freak late-season blizzard and it’s your fault?

I tweeted this on Saturday:

Thing I did not anticipate but should have: my kids love the LRT so much that it is not just a delightful way to get to a fun activity on the weekend but it IS the activity. We could just ride it back and forth eating Goldfish and do nothing else and they would be thrilled.

On Wednesday, by the time my morning bus arrived at Tunney’s Pasture, it was clear something had gone terribly wrong, for the second day in a row. There were thousands of people filling the station and jamming the sidewalk in front of it, with a long parade of buses continually barfing out more commuters.

If you don’t live in Ottawa or know this station well, an explanation so all of this makes sense:

Tunney’s is the westernmost end of the city’s gleaming, spanking-new and very fast—but apparently still horrifically buggy—light rail system. The new Confederation line starts in the eastern suburbs and runs through 13 stations, including several underground in the centre of the city, before ending slightly west of the downtown core. The system will be extended with more lines and stations eventually, but that’s several years off.

The new LRT line opened to the public on Sept. 14—more than a year late, but with massive fanfare and genuine public enthusiasm that suggested all could be forgiven.

For three weeks, OC Transpo maintained parallel bus service along the main east-west Transitway until everything settled. On Monday, that transition period ended; nearly every bus route was altered to feed the LRT line, and the biggest change was that train service would now entirely replace hundreds of cross-town bus routes.

When it’s working well, the new Confederation line is like a city-wide magic trick. It’s incredibly fast, particularly as it zips beneath the clogged downtown streets in rush hour, and the sleek stations feel like they belong to another, instantly more grown-up, city. It’s easy to imagine how the convenience and speed of the train, and the stations where you suddenly pop up at street level in the heart of downtown, could fundamentally change Ottawa.

But that “when it’s working well” caveat has been a killer so far.

At 8:16 am on Wednesday, OC Transpo, the city’s transit authority, tweeted “Service delays can be expected due to door fault. Updates to follow.”  This same issue ground the system to a halt during morning rush hour the day before, perhaps because the sudden bump in ridership means people are having a harder time exiting before the doors close at certain stops.

By the time my bus arrived at Tunney’s maybe 10 minutes after that service update on Wednesday, there were thousands of commuters stuck inside the soaring, glass-walled station. I got off my bus with my neighbour, who had already seen a Facebook update from a friend warning ominously of problems, and we walked toward the station, where we got stranded in a throng of several hundred people on the sidewalk.

It was clear to us now that the trains weren’t running at all and “R1” bus service was replacing them, but the crowds were growing much faster than they could be cleared.

Outside the new train station is a huge and extremely busy bus loop. Buses arrive continuously from all points west and drop passengers off to catch trains downtown, while others depart from the loop to head back out on western routes. But during morning rush hour, nearly everyone is heading toward downtown.

So on Wednesday, dozens of buses kept arriving and disgorging passengers all around the bus loop, but there were no trains to ferry them away. The buses replacing the train service were obviously inadequate to clear the backlog, even with people packed in sweatily against the doors like Tokyo subway passengers, so the crowds just kept growing.

Even giving up and leaving the station wasn’t much of an option. The only straightforward ways out of Tunney’s onto the street are through the station itself, but it was so rammed with people that was impossible. I saw at least three commuters—including a woman wearing a nicely tailored camel coat, so thumbs-up to that athletic feat—scramble up on a bench and launch themselves over the fence to get out of transit purgatory. Beyond the fence, the news cameras had already showed up.

Another commuter gives up and goes awol. pic.twitter.com/scT80FCG7r

The day before, when another door fault had killed train service for a time, I arrived at Tunney’s to find the platforms and stairs clogged with stranded commuters, but the ground-floor concourse was mostly clear. I had my laptop with me and needed to catch up on reading about the federal election debate from the night before, so I decamped to the Starbucks across the street until the crowds cleared.

No such luck on Wednesday. It was obvious no one in our part of the crowd was getting on a bus soon, so my neighbour and I retreated to an open area near the fenced perimeter, waiting for something to give.

At 8:34, OC Transpo tweeted that “System-wide service delays continue beyond 15 minutes. We appreciate your patience.” This made me think of Matt Damon’s pilot, Carol, on 30 Rock telling Liz Lemon that you can keep passengers docile while making them wait indefinitely if you break it to them in 15-minute increments, because that is how my brain functions.

Eleven minutes later, the transit authority announced that bus service was now being extended to two more stations, which didn’t suggest the situation was improving.

By about this time, the train station had cleared, which must have been due to people leaving through the gates to the street, because there were still hundreds waiting on the sidewalk for buses downtown. That crowd meant it was still almost impossible for us to give up too, because there was no way into the station to reach the gates.

Finally, at 9:00 am, a transit officer unlocked the rear gates in the chainlink fence, allowing people to exit onto the street. I’d been texting my bureau chief, John Geddes, with updates about the ridiculous situation, and he sent a message saying his 83-year-old dad was giving him a ride to work, and if I could reach the street, they’d scoop me, too. My neighbour and I walked out to Scott Street to meet them, proving that you are never too grown-up for a rescue by someone’s dad.

By the time we all arrived at work around 9:30 am, train service had resumed, though it was some time before all the delays cleared.

I am normally given to public rage-strokes on Twitter over the wildly unreliable transit service in this city. When you’re stranded waiting for a bus—or three buses—that should have arrived long ago, and late to pick up your kids or meet a deadline at work, the brazen randomness of Ottawa’s transit system feels like paying $3.55 per trip to be kicked in the shins several times a week. There’s seemingly nothing you can do as a citizen except bitch about it.

But on Wednesday, I ended up in a semi-amused zen state. It was obvious that the transit snafu was of such a scale that no one was going anywhere. I did not have pressing deadlines that morning, and I work in a place with flexible hours; I can only imagine the frustration and panic of people who needed to clock in at an hourly job or make an appointment.

Our new trains still feel like urban magic when they run. But if someone trying to squeeze out a door that’s been programmed to close too quickly at a busy station is enough to bring down an entire transit system, then we need a more robust sort of magic in this newly grown-up city that I love.