Closing a loophole could prevent fentanyl importers from using Canada Post. "It just seems like an extremely logical and easy thing to do." 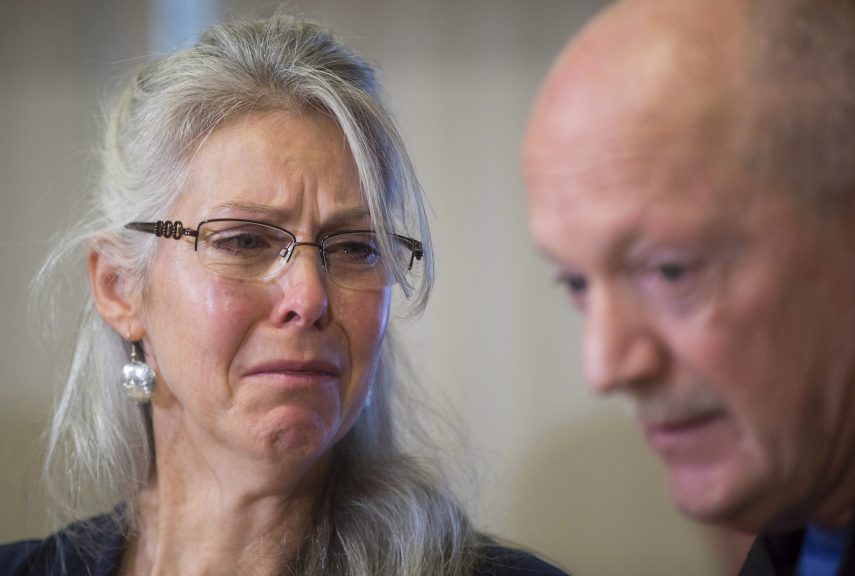 Jennifer Hedican, left cries after her husband John, right, spoke about their son during a news conference in Vancouver, B.C. on December 1, 2017. (Darryl Dyck/CP)

It’s been almost two years since John and Jennifer Hedican lost their 26-year-old son Ryan to fentanyl poisoning in 2017. Since then, the Courtenay, B.C. couple has watched with frustration as the death toll from the opioid epidemic has continued to rise. They are now enraged the federal government won’t implement a small fix to make it harder to get fentanyl across the border.

An archaic legal loophole had transformed Canada Post into the shipping method of choice for fentanyl importers. In 2017 — the same year the Hedicans’ son died — the government considered acting on a recommendation from law enforcement agencies to grant police the power to search packages sent through Canada Post. Police can already search packages sent through private couriers, but the Liberal government ultimately chose to leave the law unchanged.

READ MORE: For Fentanyl importers, Canada Post is the shipping method of choice

“It’s appalling that our government isn’t preventing fentanyl from coming into this country and killing its citizens,” John said. “It just speaks to their lack of action in preventing deaths.”

A Maclean’s investigation recently revealed the loophole is exploited by online drug traffickers. About 92 per cent of the fentanyl sized by the Canada Border Services Agency since 2016 has come through the mail. The synthetic opioid is particularly well-suited to this shipping method because extremely small amounts are still potent.

The problem for law enforcement officials stems from the Canada Post Corporation Act, a 1981 law written at a time when interfering with the mail was considered an unthinkable violation of privacy. The act states that “nothing in the course of post is liable to demand, seizure, detention or retention.” Even with reasonable grounds to suspect criminal activity, officers can’t get a warrant to intercept mail “in the course of post,” which includes packages sitting in a mailbox or a Canada Post outlet in a mall. They must instead ask a postal inspector to review packages on a case-by-case basis.

Canada Post initially responded to questions about the problem by describing the chance of dangerous goods being shipped through the mail as “small” and highlighting cooperation between postal inspectors and the police. In an updated statement after the Maclean’s story was published, the agency said it is concerned about the risks to its employees and Canadians and is “open to ideas” about how the law could be updated to better protect them.

Amy Graves, who founded the Halifax-based organization Get Prescription Drugs off the Streets after her brother Josh died of an opioid overdose in 2011, called law enforcement’s recommendation that the government close the loophole “a very valid request.” She said she doesn’t think increased enforcement will solve the crisis on its own, but red tape preventing police officers from doing their jobs should be eliminated.

“We shouldn’t just be giving up and saying, ‘OK, import your drugs,'” Graves said. “You’re dealing with organized crime a lot of the time and organized crime also has a ripple effect with violence and so many other things.”

Moms Stop the Harm co-founder Leslie McBain also supports legislative changes to give police the same powers to search the mail as private couriers, but she has some reservations. She’s concerned that if law enforcement blocks fentanyl from entering the country through the mail, organized criminals might start manufacturing it in Canada instead.

“Prohibition has made this situation the way it is,” she said. “Prohibition [of alcohol] did not work, so the government changed the law and regulated a safe supply. That’s what we think will… make a big difference to those who are dependent or addicted to opioids.”

After years of advocacy, McBain said she’s realistic enough to concede opiods are unlikely to be legalized any time soon. In the absence of sweeping policy changes that would reduce the demand for dangerous street drugs and save lives on a large scale, she said it makes sense to change the law and potentially make a dent in the supply.

“Law enforcement and border services have to do what they’re mandated to do,” McBain said. “But I think the actual effect of increasing police powers is effective only in a very, very minor way.”

John and Jennifer Hedican agree that the most effective thing the government could do to prevent deaths would be to offer a safe supply of opioids to users. But they’re frustrated the federal Liberals won’t even take much smaller, symbolic measures, such as declaring the overdose crisis a public health emergency.

Jennifer said she believes the culprit is stigma. “It’s people they think are second class citizens,” she said. “They have the words ‘drug use’ or ‘addiction’ connected to them.”

“It just seems like an extremely logical and easy thing to do. I don’t know why they wouldn’t do it,” she said. “It defies belief.”