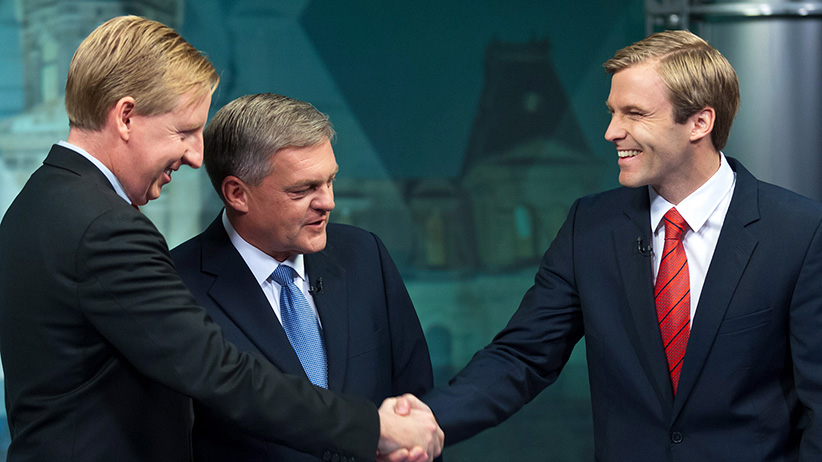 Anyone who’s ever complained that all politicians look alike, talk alike and make the same promises should get themselves to New Brunswick. The current provincial election campaign offers a vivid study in contrasts. And the chance for voters to make a serious choice on one of the most critical issues facing Canadians today: the role of resource development in our economic future.

To appreciate the decision currently facing New Brunswick, it’s useful to recall its recent past. During the 1990s, the province was considered the golden child of the Maritimes. Under the vigorous leadership of premier Frank McKenna, the province took advantage of its bilingual and well-educated workforce to launch a boom in technology investment and call-centre jobs. During this time the province displayed a proud sense of self-sufficiency and optimism. “New Brunswick is not going to be the bellyacher of Canada,” McKenna once declared.

Lately, however, it’s difficult to spot evidence of the McKenna Miracle. Unemployment and provincial debt are uncomfortably high. The budget deficit, on a proportional basis, is the largest in the country. Some analysts have gone so far as to predict looming provincial bankruptcy due to a rapidly aging population and shrinking workforce. Progressive Conservative Premier David Alward has made some efforts at austerity—and earned national recognition for his innovative shared-risk solution to runaway public pension liabilities—but the payoff in jobs and growth has yet to be seen.

Finding himself behind in the polls, the perpetually rumpled Alward has decided to go all-in on natural resource development as his province’s economic salvation. His platform touts $10 billion in potential private sector investments in pipelines, port facilities, mines, forestry projects and gas wells. His biggest bet is in backing controversial hydraulic fracturing, or fracking, to unlock the province’s potentially vast deposits of shale gas. “Say yes to natural gas,” declares his party’s ads: the solution to New Brunswick’s job and budget woes thus lies in making maximum use of his province’s new-found natural wealth.

On the other hand, front-runner Brian Gallant, the handsome young leader of the New Brunswick Liberals, says he will not be “gambling on unproven hydro-fracking” and has called for a moratorium, similar to that announced in Nova Scotia recently. Instead of private sector investment, Gallant favours a panoply of familiar government efforts: nearly $1 billion in infrastructure spending; programs to fill potholes and clear brush; a fund to renovate elderly residents’ homes and another for new daycare spaces. There’s a strategy to support local food consumption and another to ban unhealthy foods from schools. Gallant also vows to push the federal government to loosen the rules for Employment Insurance to make it easier for seasonal workers to make claims, and says he intends to demand Alberta businesses invest in New Brunswick in return for his support of the proposed Energy East pipeline.

With respect to fracking, all forms of natural resource extraction obviously require proper regulation and scrutiny. While the debate over fracking—which involves injecting water, sand and chemicals into bedrock to release trapped natural gas—and its potential impact on groundwater is heated and emotional, a recent review in the journal Science identified just one confirmed incident of contamination (dating back to the 1980s) out of more than a million fracking well treatments. Plus, the vast supply of gas unlocked by fracking has sparked an energy revolution in the U.S. and Western Canada. (In what may be a first for a Canadian conservative election platform, Alward’s policy booklet quotes U.S. President Barack Obama on the many benefits of a fracking-fuelled natural gas boom.)

Beyond the narrow debate over fracking, however, the New Brunswick election involves a broader choice between competing visions of growth and jobs. Gallant promises an ever-more dominant public sector committed to incessant bellyaching to other levels of government—perpetuating the kind of inward-looking culture of victimization and political opportunism that’s become so common in Canada. Alward, despite his problems to date, offers a far more realistic chance of recapturing the glory days of the McKenna Miracle by taking advantage of technological change. Certainly new private sector investment is the only option that could possibly defuse the time bomb of an aging population.

Last year in a major speech in Saint John, McKenna, now deputy chairman of the Toronto-Dominion Bank, characterized shale gas as a lifeline that could pull his province out of its economic and demographic doldrums. “Grab the rope!” he urged. New Brunswick has a clear choice to make.