Gerry Ritz is the least of our problems 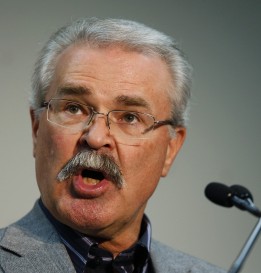 Should Ariculture Minister Gerry Ritz resign? Sure, what the hell. If a politician’s main job during a crisis is to assuage fears and manage PR, then on that basis alone Ritz should have the good sense to realize he’s utterly pooched the job. And I’m not even talking about the current meat-related crisis, in which Ritz disappeared from the House for three days, made a series of baffling and demonstrably wrong statements about the size and scope of the recall at XL Foods, and generally mishandled a sensitive and potentially life-and-death file.

No, I’m talking about that other meat-related crisis that occurred under Ritz’s watch in 2008, in which 22 people died following a listeriosis outbreak at a Maple Leaf Foods processing plant in Ontario. Ritz, you’ll recall, made light of the crisis during a conference call with government officials. “This is like a death by a thousand cuts. Or should I say cold cuts,” Gerry (Putting On The) Ritz said. He then expressed his hope that a recent listeriosis-realted death in P.E.I. was that of Liberal agriculture critic (and proud son of North Wiltshire) Wayne Easter. PR 101: making fun of the dead and wishing death on your political opponent is generally a bad thing, and the fact Ritz still has a job after that little darling bit of callousness says something about the depth of the Conservative caucus, or the pigheadedness of the Conservative government, or both.

But be aware: even in the unlikely event that Ritz is turfed from his ministerial position, the meat-producing industry will remain as dangerous and disease-prone as it was yesterday afternoon. That’s because at its heart, the problem isn’t political; it’s structural. Put another way, people aren’t going to get sick because of the whatever bon mots happen to trickle out of Ritz’s face. They’ll get sick because of the way meat is produced in this country, a process that predates Ritz by a country mile.

According to several news reports, XL Foods processes roughly 40 per cent of all domestically consumed beef in Canada. I couldn’t confirm the number, as the Canadian Meat Council “does not publish the individual production capacities of its member companies,” according to spokesman Ron Davidson. Yet Davidson would say that “the two largest companies in Canada (Cargill and XL) do indeed account collectively for the significant majority of Canada’s beef production.” Herein lies the problem: if you, like the vast majority Canadians, consume supermarket-sourced cow parts, you have repeatedly (and probably unknowingly) given your business to one of just three processing plants in the country: XL Foods in Brooks, Alta; and Cargill in High River, Alta and Guelph, Ont. And by their sheer size alone, those plants are an ideal way to spread disease.

We are in the midst of seeing what this means in practical terms. In Canada alone, the recall includes hundreds upon hundreds of products from 89 brands and distributors from across the country. There are 37 products at Buy-Low Foods alone. The recall has touched the U.S. and Hong Kong and will likely spread, given that XL exports to 20 different countries. Forget for a second the other unsavoury aspects of the industry—like, say, the fact that feedlots are an ideal way to ensure that your product is covered in feces just prior to being transformed into steak and such. If that cow were slaughtered at a small abattoir, and it happened that the blade of one grinder was tainted with E. Coli bacteria, it would be an isolated problem at worst. But because XL Foods processes upwards of 4,000 heads of cattle a day, that one blade (or, ahem, the lack of hot water) suddenly becomes an international concern. It’s a similar problem that befell Maple Leaf in 2008: two slicing machines at one plant led to a recall of 220 products and 22 deaths.

There’s an obvious solution to this, of course, starting with less centralized slaughtering operations. But that would eat into company profits, and we can’t have that. Consumers can also get butcher-sourced meat, but this is a luxury usually afforded to those who live in larger cities, and who have the means to spend a bit more. Everyone should read Fast Food Nation, journalist (and noted non-vegetarian) Eric Schlosser’s clear-eyed, non-preachy critique of how meat is produced in America. At the very least, you will never look at (or consume) supermarket ground beef again.

By all means, give Gerry Ritz the heave-ho. Just know that the problem goes much, much deeper than one slightly obtuse politician.