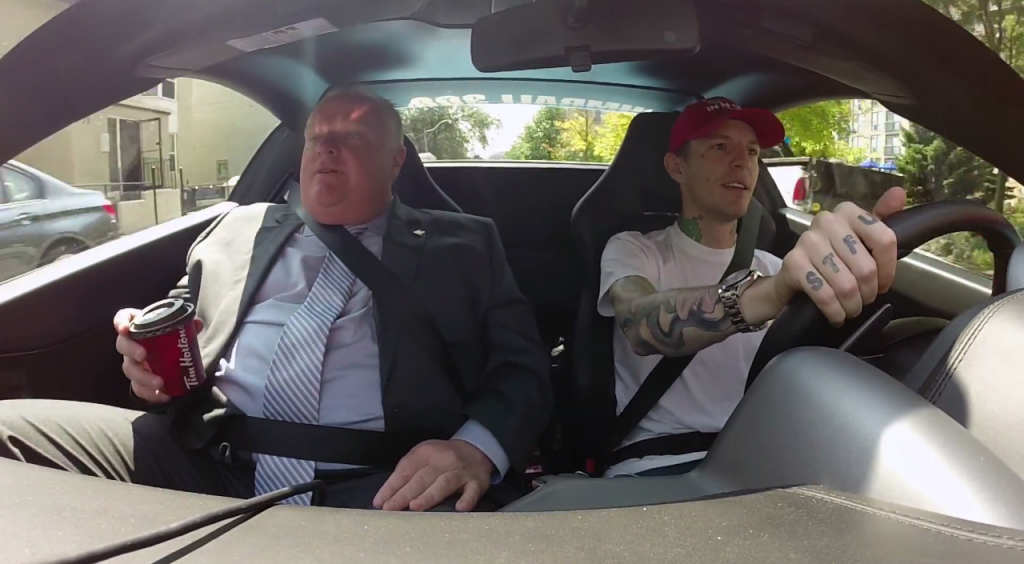 There’s little objectively newsworthy about a half-hour video showing notorious Toronto Mayor Rob Ford and famed electronic dance music (EDM) artist deadmau5 going for a coffee run. Deadmau5 had been doing these with people ranging from Tom Green to rapper Bun B, in a kind of stilted spin on Jerry Seinfeld’s Comedians in Cars Getting Coffee web series; the fact that the A-list artist born Joel Zimmerman appeared at Ford’s City Hall office like so many B-list celebrities (Snow, the Iron Sheik) didn’t matter either, as he maintains his political neutrality throughout.

So a political document or policy paper or debate, it’s not. And yet we watched all 30 hypnotic minutes of it—for five reasons. Here’s why we did it, and what we learned:

1. He’s actually answering questions. Sure, they’re questions from a musician who himself is less than forthcoming on answers in interviews, but they’re questions all the same. Maybe this is the way to get some quotables: Ford offers, apropos of very little, his thoughts on what kind of distracted driving is worse. “The biggest problem … people think cellphones are bad, and texting [while driving]—it’s eating,” Ford says. It’s an unusual thing to discuss given his own proclivities for doing it. When deadmau5 bemoans the fact that people are selling prefab knockoffs of his trademark mouse helmet, Ford agrees, complaining about how they’re “making these movies and books” about him, seemingly blissfully unaware of why they’d be doing that in the first place. When deadmau5 talks about speeding, he jokes: “No one’s above the law, not even the mayor.” “That’s for sure,” Ford responds, laughing, existentially. It’s likely there would be nary a peep beyond the imploding Twitterverse about this odd-couple collaboration were it not for Ford’s habit of bulling past reporters, offering little more than silence or straight-ahead talking points.

2. He might be something of a man of the people. It’s a big part of how Ford won in 2010—how he returned calls from constituents and would personally go out of his way to help with even the smallest of issues—but it’s becoming more central to his mannerisms and personality again as the campaign kicks into high gear. We were reminded of this at (questionably acceptable) events like Ford Fest; as reported by Desmond Cole at Now Magazine, the touch of the common man is why even black disenfranchised voters would support him, despite his racist remarks. A video with a popular musician—and showing the difference in their lives—would elevate Ford in the eyes of younger voters and his base, no doubt.

He’s wide-eyed and impressed by deadmau5’s Ferrari: “This thing’s cool man … it’s unbelievable. Aw yeah. I’d be toast, man, owning one of these.” He admits to speeding up when he’s on the open road heading to the cottage. He calls espresso expresso, spurning the proper pronunciation of the fancy coffee drink. He’s just like us.

3. He’s a perpetual campaigner. Even when in a sports car with a famous DJ, with little more than a GoPro between them, Ford finds it hard to turn off the campaign talk—which makes it hard to trust the authenticity of his man-of-the-people moments. He slips into his talking points with deadmau5, railing against the Pan-Am Games and boasting about the numbers of calls he gets and answers from constituents. He repeats nearly verbatim with a line from his own ad, about how small problems in the grand scheme become big problems for people, and therefore big problems for him. There’s even a moment where Ford waves out the window at a passersby and deadmau5 believes it’s because of him—talking about how he gets that all the time—but odds are, it’s because someone saw the mayor, a much more instagrammable face.

4. We kind of learned some personable things about him. He’s long since meaningfully frozen out members of the media, so we’ll take any facts we can get—and some of the stuff here is remarkable in its humanity. For instance, there’s the revelation that Doug and Rob play board games in their downtime, including Monopoly and Risk, and that while Rob’s a big Risk fan, older brother Doug can perhaps be a poor sport when he loses. “He picks up the whole friggin’ table and starts freakin’ out,” he said. He knows a thing or two about EDM, sympathizing when deadmau5 complains about people wrongly calling him a DJ (this, despite Ford’s friend Zlatko Starkovski’s efforts to stop EDM concerts on the waterfront). He also loves math jokes, apparently: when the Tim Hortons employee struggled to understand an order of five espressos in a single cup, deadmau5 offered that it could be “like a single, a double and a double”—a joke that Ford was so tickled by, he brought it up again three times, including at the end of the trip, saying “I gotta tell my buddies that one.”

5. Everyone loves a fish out of water. There’s no question that despite all Ford’s debauchery, and all of his family’s considerable wealth, deadmau5’s lifestyle represents a different level, one that Ford has never experienced. See the abject fear in Ford’s eyes as the car revs up, speeding on a ramp in a parking garage. (Then again, the EDM star is legitimately shocked by the mayor’s seemingly standard order of five espressos in one cup—and that’s saying something.)