Canadian universities are receiving funds from what U.S. prosecutors allege is a front for the Iranian government 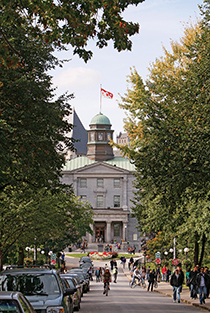 A foundation that American authorities say is a front for the Iranian government continues to fund McGill University and a Toronto Farsi school, years after U.S. federal prosecutors went to court to seize the group’s assets and alleged it was channelling money to an Iranian state-owned bank sanctioned by Canada.

The Alavi Foundation is a New York-based non-profit that has given more than $300,000 to Canadian universities, and more than $200,000 to the private Toronto Farsi School, since 2004.

In November 2009, U.S. federal prosecutors filed an amended civil complaint seeking the forfeiture of the foundation’s interest in a lucrative Manhattan office tower, from where it derives most of its income. The property was built in the 1970s by the Pahlavi Foundation, which was controlled by the shah of Iran to run the country’s charitable activities in America.

The claim, which is not resolved, alleges that, following the 1979 Islamic Revolution, Iran’s new government took control of the property and the foundation, which it renamed, running them through Iran’s ambassadors to the United Nations.

It alleges that the Iranian state-owned Bank Melli, through an offshore shell company, owns 40 per cent of the Manhattan property, while the Alavi Foundation controls the remaining 60 per cent.

Under Canada’s 2010 Special Economic Measures Regulations on Iran, Bank Melli is a designated entity with which Canadians cannot do business. The United States and the European Union have also blacklisted the bank, alleging it funds terrorism and Iran’s nuclear missile program.

“For two decades, the Alavi Foundation’s affairs have been directed by various Iranian officials, including Iranian ambassadors to the United Nations, in violation of a series of American laws,” Preet Bharara, the United States attorney for the southern district of New York, said in a statement announcing the November 2009 complaint.

The following month, Farshid Jahedi, former president of the Alavi Foundation, pleaded guilty to obstruction of justice after admitting he tried to destroy and discard documents he knew would be subpoenaed as part of an investigation into the Alavi Foundation’s alleged relationship with Bank Melli.

At the time, the Alavi Foundation already had a long-standing funding relationship with several Canadian universities, as well as the Toronto private school. Its charitable tax records indicate it gave $5,000 to the University of Alberta in 2004 and 2008, and $10,000 to Ottawa’s Carleton University in 2007. The Toronto Farsi School, which has charitable status and claims it can provide credits toward an Ontario secondary-school diploma, received more than $200,000 between 2004 and 2010. The largest beneficiary in Canada, however, was McGill University’s Institute of Islamic Studies, which received $270,000 between 2004 and 2010. Christopher Manfredi, dean of McGill’s faculty of arts, told Maclean’s he believes Alavi has been funding McGill since 1987.

Manfredi says he’s aware of the allegations against the Alavi Foundation but has seen “no direct evidence” linking it to the Iranian government. But for Payam Akhavan, a professor of international law at McGill, suspicions about the Alavi Foundation’s alleged links to Iran should give McGill pause before the school takes its money.

“The acceptance of funds from an organization suspected of acting as a front for a regime with an appalling human rights record raises serious ethical questions,” says Akhavan. Manfredi says McGill exercises “due diligence” regarding its donors and “tries to ascertain that the source of funds is of good standing and does not create any difficulties.”

Neither the Alavi Foundation nor the Toronto Farsi School responded to interview requests.