'One of my first memories is eating sushi'

Liam Lewis is the little locavore

Creamy miso tahini dressing, beet ketchup, savoury Japanese pancakes: these are a few of his favourite things. Liam Lewis is a budding chef, refining his craft each evening after school by creating recipes at his apartment in Vancouver. In his bedroom, he’s built a Lego set with 3,000 pieces to reflect his passion. “Right now it’s just a giant kitchen,” he says.

Liam has been a foodie ever since he learned to chew. His parents aren’t chefs (Michael is an engineer and Joanne is a stay-at-home mom), but he was born in Toronto, a city of a million menus. “One of my first memories is eating sushi off my Finding Nemo plate,” says Liam. “Very ironic, I now realize.” At age five, he created the first concoction of his own—apples pushed through a garlic crusher, speckled with lumps of cilantro. He served the dish to his parents: “just for you, just for you.”

FROM THE ARCHIVES: In 2002, Maclean’s pays tribute to the late Peter Gzowski

Fortunately and rapidly, Liam improved. By age eight, he was grilling zucchini, and at age 11, his family moved to Vancouver, where he took classes at the Pacific Institute of Culinary Arts and summer camps at a school called the Dirty Apron. After he and his mother read a book about sustainable food, The Locavore, they visited a farmer who sold meat pies at a local market, using her grandmother’s dough recipe. “They were the best meat pies in the world,” says Liam. The experience became the subject of Liam’s first post on his blog, titled The Little Locavore.

Gaining attention through his website, Liam began doing apprenticeships. He cleaned lobsters for Ned Bell, executive chef for the Four Seasons (“he’s a good friend of mine”) and received advice from celebrity chef Rob Feenie. “He told me, ‘always be organized. Always have your mise en place ready,’” says Liam, who also worked with Vancouver’s Vikram Vij. 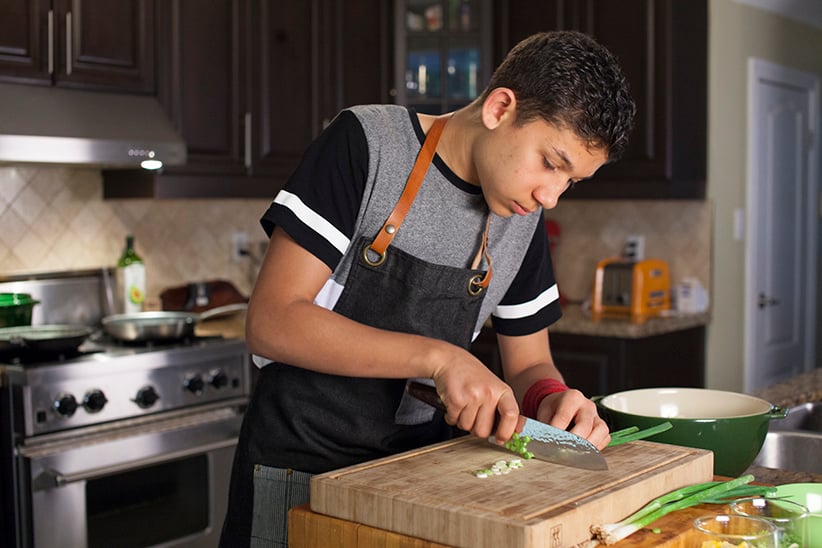 At home, Liam’s kitchen pantry is stocked with tools but is not yet complete. “A deep-fryer and an ice-cream maker are on the top of my list,” he says. A sponsor gave him a specialized grill pan, and he owns a chef’s knife from the company Tojiro, after which he named his goldfish. Considering his current assortment of knives, he thinks about his early days when he chopped potatoes with a steak knife. “I look back and think, ‘How wrong was that?’ ” he says.

When Liam isn’t cooking, he goes to school and skates. His teachers at his French public school let him miss class for cooking opportunities and skating competitions. Six mornings a week, Liam practices ice dance, specializing in the waltz. He often spoils his teammates with cupcakes, which are irresistible enough for an older skater to break her diet. “She doesn’t eat carbs after four,” says Liam. “But if it’s really good, she’ll make an exception.”

Liam’s recipes have become increasingly complicated. For Christmas dinner in 2015, he prepared a chicken inside a duck inside a turkey: a “turducken.” The triple-bird delicacy was intended solely to feed him and his parents. “I’ve never made anything like molecular gastronomy,” he says, “but I have made salmon sous-vide,” a style in which the animal cooks in a vacuum under controlled temperature, so it crisps at the skin but doesn’t change texture internally.

Although Liam doesn’t eat meat on Mondays, he won’t become vegetarian. He makes cauliflower macaroni and cheese, peach crisp, and juice squeezed from kale, apple and ginger, but his preferred protein is pork, whether it take the form of sausage, tenderloin or chops. Another staple is Spam, which he prepares in fried rice, kabobs and Hawaiian Spam balls covered in dried seaweed. “My friend introduced me to Spam,” he says, “which I kind of fell in love with.”

Whether it be catering, cooking at a restaurant or operating a food truck, Liam envisions a future in food. Volunteering at a soup kitchen taught him about prices, which can be easy to forget when grocery shopping three times a week on his parents’ penny. While he learns to budget, he also has one more thing to master, as became evident when a pot of spiced maple glaze recently splattered across the kitchen. As he admits, and his mother agrees, “I’m not the best at cleaning up yet.” — Meagan Campbell