For Indigenous boy whose braid got cut, the meaning of long hair makes it worth the taunts 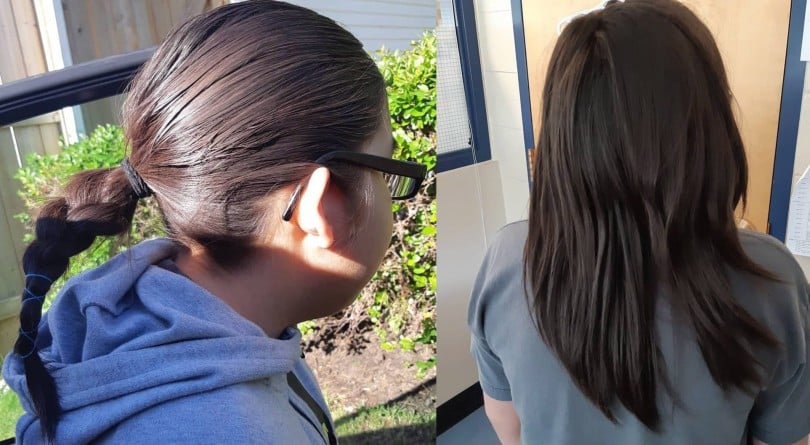 Left: Rafe Vadnais shows off his hair braid in a recent photo. Right: his hair after the braid was partially cut by a fellow student (Shantel Tallow/CP)

One evening about a year ago, Shantel Tallow’s son, Rafe Vadnais, visited her in hospital. Tallow has lived with epilepsy since she was eight years old, and last year was frequently in and out of care. She had suffered 37 seizures, and the medication she was on had caused her to lose her hair. Rafe had watched in sympathy and made his mother a promise to grow his hair for her. “They wanted me back home,” says Tallow, a member of the Blood Tribe in southern Alberta. “Visiting me in hospital and seeing me that way—I wasn’t the mom they were used to having.”

Rafe’s hair grew long and thick. After attending a cultural event catered by Tallow’s company, the 11-year-old was inspired to wear a traditional braid. Then he worked up the courage to wear it to his school in Calgary, where Rafe is in the sixth grade and where Tallow says he’s one of two Indigenous students.

The moment arrived on a Monday in late May. That morning, Tallow braided her son’s hair as they both stood in the bathtub. Once it was complete, she said a prayer. Rafe had already been called a girl for having long hair. So they prepared for even more ridicule. “I asked him: ‘Are you sure about this?’” Tallow says. “He was. He was very certain, and he was very excited to be wearing his braid that first day.”

But when she picked up Rafe from school later that day something was different. His hair appeared to be down but, she knew it was more than that. Amid the after-school rush in the hallway, Rafe told his mother, he’d felt something on the back of his head. When he looked down, he could see some of his hair on the floor—another student tried to cut off his braid with scissors, clipping enough to make Rafe’s hair awkwardly uneven. The assailant, Tallow says, disappeared in a crowd before her son could identify him. All Rafe saw was a black jacket and blue jeans.

“I was so proud of him when I dropped him off at school,” she says. “To see that look on his face after school, after what had happened—I was raging.”

The shaming of Indigenous children for their long hair can be traced back to residential schools, where young boys and girls had their hair cut short immediately after they arrived. It was a method used by Ottawa to further its colonial and assimilationist agenda. These days, there are stories of Indigenous families speaking out against racial and homophobic slurs thrown at their sons for having long, braided hair. In 2009, a seven-year-old student had his hair involuntarily cut by a teaching assistant at his school in Thunder Bay, purportedly over concerns he was unable to see through his bangs. The incident sparked outrage in the Indigenous community.

The braid, after all, comes with cultural significance, Tallow says. It symbolizes her people’s connection to their ancestors, the Earth and the Creator. “When someone close to us passes away, we cut our hair—it’s our moment of grieving,” she explains. Tallow has lived in Calgary for 15 years and has encouraged her children to learn about their culture. Rafe’s decision to grow his hair signified his transition in life from boy to young man.

Tallow considers what happened to her son a hate crime, but she hasn’t gone to police. She recalls the story of a man cutting off the hijab of an 11-year-old girl in Toronto—a story that made national headlines at the beginning of the year but proved to be fabricated. “That turned into a negative situation,” she says. “Everything happening here, with my son, we’re going to turn into a positive situation, so hopefully our kids can learn from it.” But she stresses that nothing is being done by the school, which she declined to name.

During the week following the incident, Tallow felt that the principal avoided meeting with her. The school, she says, suggested an “intimate setting” to talk about cultural awareness. She proposed holding a round dance, a traditional healing ceremony, but the school refused. “I do not blame the staff,” she insists. “I blame the child. I blame his parents.”

Jeannie Everett, acting deputy chief superintendent at the Calgary Board of Education (CBE), wouldn’t comment on specific disciplinary cases or individual complaints. But in any such incident involving students, she says, the CBE would “thoroughly” investigate: “We would look to support the student and family, and really look at this as a teachable moment for the entire community, while holding students accountable for their actions.” School resource officers who work for the Calgary Police Service, she adds, are currently involved in the case. There are also plans to address the issue of cultural sensitivity at the school before the end of June: intervention in such situations, Everett says, could include “our Indigenous education advisers working in classrooms, talking about Indigenous knowledge systems, protocols and respect for diverse cultures.”

Tallow hopes changes are made by September. She has a young daughter who will be entering the same school. She is aware of an eighth grader who has repeatedly tormented Rafe, and in a school with a ninth grade, she worries what may happen if they spend another year together without anything done to ensure the safety of Indigenous students. “I have my moments where I just break down and cry, because I feel for him,” she says. “He keeps reminding me that he’ll be okay.”

For now, Tallow tries to remain positive, so her son isn’t afraid of going to class every morning: “Nobody should fear attending school because of their culture,” she says. In her eyes, mother and son are healing together. Tallow is back home and her hair is beginning to grow back; Rafe is unshaken and will continue to grow his locks. “This is more inspiration,” Tallow says. “Rafe was told that with his new hairdo, and the way he’s wearing it, he looks like Chief Crowfoot. I know that made him feel really good.”