Maclean's speaks with evacuees after they arrived in Edmonton, by way of Fort MacKay

As the rapidly expanding Fort McMurray wildfire jumped Highway 63, the only exit south of the city, residents caught on the wrong side of the flames were forced to flee north, including to the oil sands community of Fort MacKay just over 50 km away. Shell Canada then chartered flights from that hamlet, nestled on the western shore of the Athabasca River, south to Edmonton. That’s where Maclean’s caught up with several evacuees who shared their stories.

The 19-year-old Fort McMurray evacuee had managed to bring Gus, as well as her pet lizard, along with her on the charter flight. Peddle’s family believes their home is gone, along with 50 per cent of Fort McMurray’s Abasand neighbourhood, where she grew up.

“At the end of the day, it’s just possessions,” says Peddle. “But I have photos from my childhood, and of my pet dog who passed away. Those can’t be replaced.” Peddle was home alone when her mom called her on the afternoon of May 3: “Don’t panic,” her mom said. “But I want you to pack a bag, in case we need to leave.”

Within minutes, smoke was flooding their home. “I was terrified. It was coming in really fast. I was scared for Gus—I didn’t want to leave him. Then the power started to flicker—the lights were going in and out.” Peddle was stuck there all alone: with fires raging, and traffic stalled, her mom and dad were not able to get home to pick her up.

Finally, a family friend got to her. By the time Peddle fled Abasand, a fire was burning at the end of her street.

“All of a sudden, we felt the truck shake. It was the fire sucking the wing—it felt like everything was being sucked out of you. Then the fire suddenly flared. It was as loud as a hurricane.”

“My son looked out the window. He screamed: “Mom! There’s flames.”

“Flames were shooting up between Sobeys and Wal-Mart. It was really close—right beside us. And we were stuck in traffic—we couldn’t move. I phoned my husband, and he said, ‘Just get out the car, and run.’

“So I pulled off to the side of the road and me and the kids, we ran—we just ran as fast as we could to get away from it. I was only wearing flip-flops.

“At the time, my husband was trapped on Abasan Hill in bumper-to-bumper traffic—he’d gone back to get the dog. He was watching the fire grow in his rearview mirror.

“That was the scariest moment for me. I was racing with my kids, not knowing whether my husband was going to make it, or not. It still don’t seem real. It’s like a really bad dream.”

Pickett’s husband was forced to flee south. She and her children went north. They ran out of gas on their way out of Fort McMurray, and spent the night of May 3 sleeping in a tent under a bridge north of the city. “It was freezing. It poured rain that night.” By 3 a.m., Pickett packed the kids back into the truck. They managed to make it to the gates of Shell’s Albian Sands camp before the car died. Late on May 5, Shell evacuated Pickett and her family to Edmonton on a charter flight.

But for Pickett, the nightmare is still not over: “We have no savings.” Her husband spent four months off work this winter. Money grew so tight, they were dipping into their savings and planning to return to Newfoundland, where she and her husband grew up. “We had nothing left.”

Then in March, a break: he was called back to work. With the first paycheque, they managed to clear their debt and get back to square one. The next paycheque was meant to pay for their long-delayed wedding. 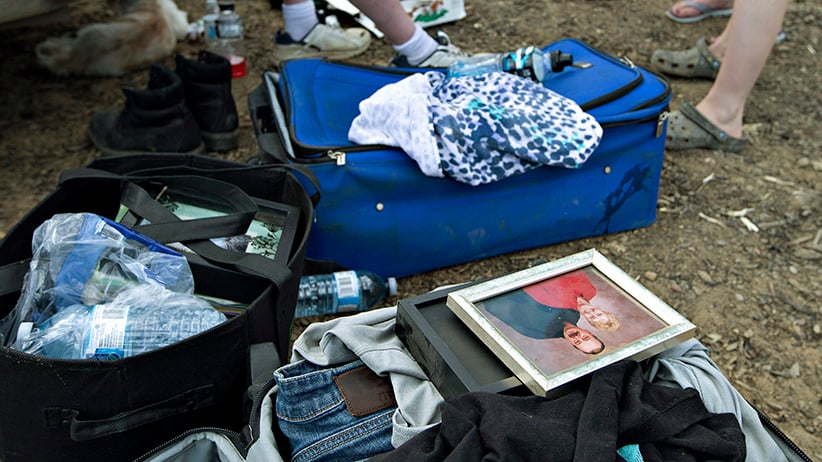 Family pictures packed in suitcases are seen as a family of evacuees camp out on their van at a beach south of Fort McMurray, Alta, on Wednesday May 4, 2016. A wildfire has already torched 1,600 structures in Fort McMurray and is ready to renew its attack in another day of scorching heat and high winds. (Jason Franson, CP)

“My scariest moment was trying to drive down Confederation Way in total gridlock with my eight-months-pregnant daughter, grandson and dog. The smoke billowing in the distance kept getting closer and closer—I thought the fire was going to take us all as we sat in traffic.”

At work on May 3, Drouin and her co-workers had been closely watching the sky. By 12:30 p.m., it filled with smoke, and darkened. “I thought ‘Oh my God, the wind has changed direction. About an hour later we got the word of the initial evacuation [of three communities]. Everybody just left—the office just emptied.”

Drouin raced home to Beaconsfield, where she managed to grab her mother’s ashes. “You don’t know what you’re grabbing. I said, ‘You know, mom’s coming with me.’ ”

She fled north, and spent two nights in camps around Fort MacKay before Shell managed to evacuate her family on a charter flight to Edmonton on May 5.

“There’s so much left behind—30 years of living up there, and what have we got left? Maybe the bag I’ve got on my shoulder,” she says. “Is that it? Are you ever going to see anything again? Is everything you worked for over the last 30 years gone? You just don’t know.”

On the afternoon of May 3, Frantze and her father had gone grocery shopping. By the time they got home, and started unpacking, the smoke suddenly grew around their Timberlea neighbourhood, packing them in: “It was insane. You couldn’t even see the sky anymore.” My husband called: “It jumped the river,” he said. “I was freaking out. I was really upset. I got everything packed up. But my family was quite stubborn. They kept saying, ‘Let’s wait—we don’t want to congest the highways.”

“I was panicked,” says Frantze, who runs a daycare in her home, thankfully closed on that day. “I knew in my guts we should have left hours earlier. I said, ‘I’m leaving with or without you. And I’m taking kids with me.’ Then my friend called, and said, ‘Did you hear? The whole town’s evacuated.’ By then we couldn’t get out.” What should have taken five minutes took two hours. “You could just see smoke coming in closer and closer.” The water bombers and helicopters above could do nothing to help them.

“I was behind the wheel, and had an anxiety attack. My dad had to jump into the driver’s seat to switch me out. I was so scared for my children. I didn’t know what was going to happen. Was the fire going to get us while we were sitting there? Were we going to burn to death? If the fire came closer, how do you run from that?”

If the flames reached them, Frantze and her dad made a plan to cover themselves in blankets, and lie in a nearby culvert. “We didn’t know if we were going to make it out.”

“People started panicking and driving through banks and ditches. I kept screaming at my dad: ‘Why aren’t they opening the southbound lane? They need to let everybody out.’ Behind us there was just a line of traffic—people trying to get out to safety.”

The family left home at 5 p.m., and finally made it to Shell’s massive Albian Sands camp, where the bulk of northern evacuees ended up, at 10:30 p.m. They’d stopped at every workers’ camp along the route but were turned away. There had been no room anywhere.

Still, Frantze didn’t feel safe and couldn’t sleep, and was constantly on her computer, trying to find news: “We’re on the road to nowhere. We’re at the very end of where you can go. There’s nowhere to flee from there.”

Frantze, her mom and her two kids flew to Edmonton on a Shell charter on May 5. Her husband and father remain at Shell’s Albian Sands camp.

They live just beyond the Fort McMurray International Airport

“All of a sudden it was just flames everywhere,” says Cassandra, who is studying to pass her high school equivalency test. “There were cars flying over Beacon Hill. There were animals running ahead of the fire. People were stopping, and scooping up dogs and bringing them into their cars. People were letting their horses go, just opening their gates and saying, ‘Go!’ ” Beacon Hill was in flames.

For a few moments Cassandra and her mom, Shirley Benson, were too stunned to move. “I turned my head to the right, and watched every single light at Gregoire Lake Estates explode, and start catching fire on the bank on the other side,” says Cassandra. Then they hopped in a truck, and bolted.

As they passed a McDonald’s, they saw a small fire starting on a patch of grass outside the restaurant, so they jumped out and tried to stamp it out. When they got back in the truck, Cassandra called her dad, who was with her brother. “Go north,” he said. “Just drive. I’m going to get the dogs and the cat.”

On their way out of town, Cassandra and Shirley picked up a hitchhiker. “He was running down the middle of the Thickwood Bridge. When they parted ways, he offered them his home in St. Albert, Alta. The man was headed to P.E.I. with his wife. “If you want the house, it’s yours for as long as you need it,” he told them. “It’s got a fenced-in yard for the animals.”

“All we can do right now is sit and wait and hope for the best,” says Cassandra. Her dad and brother have been stuck on Highway 63 for the past 24 hours.

Shirley says with the adrenalin pumping, the impact of it all didn’t hit her until she landed in Edmonton. Like so many coming off the charter flights yesterday, she broke down as she walked into the terminal, greeted with warm food, clean clothes, strollers, car seats and toys for the kids.

“I started crying when I asked for cat food,” says Shirley. “My poor cat’s been eating dog food. You see this stuff in movies and think it’s never going to happen. Then the town is gone. They’re saying the fire is bigger than New York City right now. And it’s only going to get bigger in the next few days.”