Frank McKenna thought his career in politics was over before it had even begun. The then 35-year-old lawyer had been touted as a star candidate for the New Brunswick Liberals in the 1982 provincial campaign. But a decision by Pierre Trudeau’s government in Ottawa to target a local military base for closure had put the people of Chatham off the party brand. On election night, Frank watched as CTV declared him the narrow loser. “At the time, I didn’t take it very well. I drank half a bottle of rum to drown my sorrows,” he recalls. Then the phone rang. The ballots from the final poll had been counted and were almost all in his favour—enough to hand him an 81-vote win. Suddenly, he was drunk and with power. “My victory speech was free-flowing—to say the least.”

Overall, the Liberals lost that election badly to the Conservatives, and Richard Hatfield returned for his fourth consecutive term as premier. The New Brunswick Tory dynasty seemed like it would last forever.

FROM THE ARCHIVES: The 1987 Maclean’s cover story on Frank McKenna and the liberals “Clean Sweep”

But by the time Frank, one of the Liberals’ only fresh faces, was voted in as party leader in May 1985, the ground was shifting. During a royal visit by the Queen the previous fall, the RCMP had discovered 26.5 grams of marijuana in the premier’s luggage. Hatfield ultimately beat the possession charges, but his personal life was now of more concern than his politics. And when he sought re-election in 1987, it was as a much diminished figure.

Frank entered that campaign way ahead in the polls, although says he took nothing for granted. “In the back of my mind was always the idea that Richard Hatfield was invincible.” Even the most optimistic partisan surely didn’t foresee the scale of the Liberal victory on Oct. 13, 1987. From his campaign headquarters in Miramichi, Frank watched as riding after riding went red. He was leading 57 seats to one, and 30 seconds away from a live national television interview, when the 400 people crowded into the hall gave a collective gasp—the last Tory riding, Restigouche West, had gone Liberal. Frank had run the table. “I think the look on my face was half-joy and half-terror,” he says. “I couldn’t imagine what the hell I was going to do with a 58-0 majority.”

The country’s second-ever electoral sweep—the Liberals also swept the 1935 provincial election in P.E.I.—worried Frank enough that he tried to create at least a bit of opposition, extending funding to the locked-out Tories and NDP, altering the legislature’s rules to allow for public questions, and putting every piece of legislation through committee.

His Liberals balanced the provincial budget, started expanding the Trans-Canada Highway from two to four lanes, and led the country in job creation, attracting call centres and tech firms. They called it the “McKenna Miracle.” In 1991, he was re-elected for a second term, winning 46 seats. (The anti-French Confederation of Regions Party became the official opposition, with eight seats.) 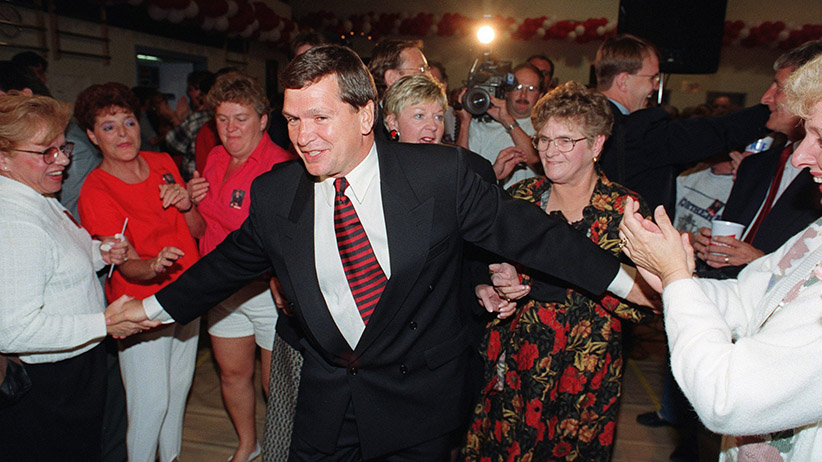 Frank resigned in 1997, 10 years to the day after his electoral sweep. He went on to serve as Canada’s ambassador to the United States, and has been the deputy chair of the TD Bank group since 2006. He considered running for the federal Liberal leadership on several occasions, but ultimately rejected the idea. “Having escaped the trap, I wouldn’t go back for the cheese,” he once explained.

Today, Frank says he has only one regret about his time in politics: his opposition to the Meech Lake accord that would have brought Quebec into the Constitution. Although New Brunswick did eventually ratify the agreement and Frank campaigned for it, the delay allowed other anti-Meech forces to gather momentum, and the deal disintegrated in the summer of 1990. “In doing what I did, I denied Brian Mulroney an extraordinary accomplishment, and the country an opportunity to do away with an intractable problem,” says Frank. “I feel a deep sense of sorrow about that.” — Jonathon Gatehouse