Fully vaccinated people have gotten the Delta COVID variant. Should we be worried?

New data from the U.K. shows the vaccines do a terrific job keeping people out of hospital, even if they get the variant. So let's get needles into arms. 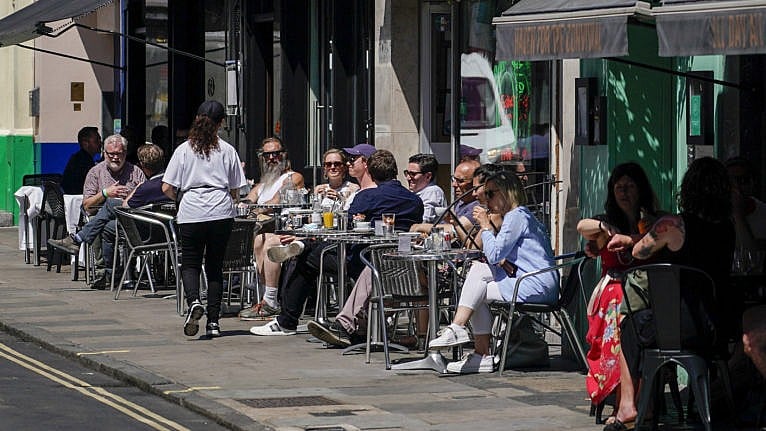 Patrons at a restaurant in Soho, in London. British Prime Minister Boris Johnson delayed the next planned relaxation of coronavirus restrictions in England due to the spread of the delta variant. (Alberto Pezzali/CP)

On May 25, when I wrote my first Vaxx Populi post on Delta (B.1.617.2), there was a lot about this new variant of concern that experts were unsure of, including how contagious it was and, perhaps most importantly, how the current roster of COVID-19 vaccines held up against it.

Delta is now everywhere. In early May, there was a COVID-19 outbreak at the Baffinland mine in Nunavut. Only after the firm stopped production and sent “low risk” workers back to their homes, did they realize that at least one had the Delta variant. Those workers, who returned to every province, helped seed Delta across the country, according to a Toronto Star investigation.

More recently, there has been a Delta outbreak at the Foothills Medical Centre in Calgary, with 16 patients and six staff infected. The majority experienced mild symptoms, though one required treatment in the intensive care unit. Of the 22, 11 had been fully vaccinated, while seven had one dose; all were given an mRNA vaccine, communications director Kerry Williamson of Alberta Health Services told Maclean’s. (The province did not disclose whether the one admitted to ICU had been vaccinated.)

That news from Alberta has sparked alarm regarding how much protection even fully vaccinated people had against Delta, and whether the contagious VOC will spark a fourth wave of the pandemic, just as provinces are reopening for the summer after their third waves.

Now, we know a lot more, thanks largely to Public Health England (PHE), a world leader in genomic sequencing as well as publishing timely analysis and studies during this pandemic. On June 14, it released the preprint of a study looking at the effectiveness of COVID19 vaccines against hospital admissions of patients with the Delta variant.

Before we get to the new PHE information, how prevalent is Delta in Canada?

On May 25, there were 416 reported cases in Canada, though experts cautioned that the real number was likely higher, as it was so new that many provinces weren’t screening regularly for it.

As of June 14, the CTV News variant tracker had 1,594 cases of Delta, though, again, that’s an undercount. Ontario’s COVID-19 Science Advisory Table estimates that Delta accounts for roughly 40 per cent of all new cases in the province. Based on how it is growing, experts believe it will soon replace Alpha (B.1.1.7) as the dominant strain of SARS-CoV-2 in the nation, just as it has done in the United Kingdom.

What does that new PHE study say?

PHE examined the two main vaccines in Britain—the mRNA Pfizer vaccine and the viral vector AstraZeneca option—by comparing their effectiveness against hospitalizations for 14,000 people who contracted either Delta or Alpha.

The reason for this study is simple: “Understanding the effectiveness against more severe end points such as hospital admissions is crucial in evaluating the risk Delta poses on the population and the consequences of easing non-pharmaceutical interventions” including public health measures, wrote PHE.

And its conclusion was equally simple: “These findings indicate very high levels of protection against hospitalisation with the Delta variant with one or two doses of either vaccine.”

What about getting a mild case of COVID-19, like most did at that Calgary hospital?

The vaccines work against Delta, though there is a noticeable difference between the two vaccines. And here again, the data comes from PHE.

On May 23, Public Health England released pre-print research into how well vaccines stand up to the new VOC found that “effectiveness was notably lower after one dose of vaccine” compared to how well they withstood Alpha.

In particular, it found that the overall effectiveness of first doses of the Pfizer and AstraZeneca vaccines dropped from 51.1 per cent against Alpha to 33.5 per cent against Delta. (While those numbers appear precise, researchers caution that they are generated from confidence interval ranges. So that 33.5 per cent is a range from 20.6 to 44.3, while 51.1 is a range from 47.3 to 54.7, so the difference in the effectiveness of first doses against each of the two VOCS may or may not turn out to be as wide as initially thought.)

“This provided important evidence that despite modest reductions in protection, vaccines remain effective against Delta,” PHE stated, though they are better at providing “higher levels of protection against severe outcomes compared to mild disease.”

So even though more and more people are vaccinated, we’re going to hear of outbreaks, aren’t we?

None of the vaccines are 100 per cent effective. And that means that some people who are fully vaccinated will get COVID-19. In May, nine players and staff of the New York Yankees tested positive for COVID-19 even though they’d all received the one-dose Johnson & Johnson vaccine in March or April.

But, like virtually all of the cases at the Foothills hospital, none of their cases was serious. In fact, only two of the nine developed mild symptoms while the other seven were completely asymptomatic and were identified because Major League Baseball has an exhaustive testing program.

What can we do?

Get fully vaccinated, as soon as allowed. That’s the best defence for you and everyone around you.

Why, then, did the British government postpone its upcoming reopening phase?

Every country experiencing the spread of the new variant is in a race between Delta and doses. And on Monday, Prime Minister Boris Johnson decided to give doses the time to extend its lead, in the hope that Delta won’t be able to catch up.  He announced that England would extend its current restrictions by four weeks (Scotland and Northern Ireland are on a different timetable). They were due to be significantly relaxed on June 21 but that date is being moved to July 19.

He wants “a few more crucial weeks to get those remaining jabs into the arms of those who need them,” with a new goal of having around two-thirds of adults fully vaccinated, saying, “now is the time to ease off the accelerator” when it comes to reopenings.

The decision came after the Scientific Pandemic Influenza Group on Modelling, Operational sub-group presented modelling scenarios for what could happen if restrictions were eased. Their findings should be a sober reckoning for every government.

They estimate that Delta is 40-80 per cent more transmissible than Alpha (though, because researchers are still figuring out how Delta operates, they caution that the range could actually be higher or lower). And while Britain is experiencing a resurgence of cases and hospitalizations, the experts warned, “The scale of this resurgence is highly uncertain, and it could be either considerably smaller or larger than previous waves.”

While there is uncertainty as to how the next few weeks and months will unfold in Britain, the modelling was unified in the effect of postponing the next step of England’s reopening, as the report stated: “In all scenarios modelled, even a short delay to the timing to Step 4 results in a significant drop in the number of people being admitted to hospital as more people are vaccinated and as the school summer holidays get closer. Even a two-week delay would have a significant effect, but a four-week delay is modelled as reducing the peak in hospital admissions by around a third to a half. A delay would also allow evidence to build up on the effectiveness of vaccines against Delta, potentially increasing precision in future modelling scenarios.”

What does Britain’s decision mean for Canadians?

Governments will have to balance the risk of Delta against their reopening plans. There is a strong desire to have some semblance of normality after months of restrictions. Yet, at the same time, Canada’s share of full immunizations, now at 17 per cent of adults or 15 per cent of those 12 and older, is far below that of Britain. We’re catching up quickly: by Canada Day, more than 30 per cent of eligible residents will have received both doses, according to data crunched by Trevor Tombe, an economist at the University of Calgary.

Is that enough? No one knows for sure, at least right now.