Defends his decision to invade Iraq. Offers Obama help, if he wants it. 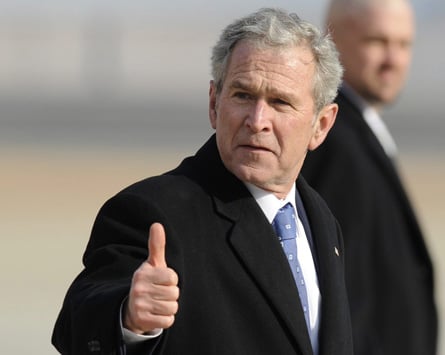 In an at times passionate, occasionally combative and frequently funny speech before a packed Calgary audience, George W. Bush addressed the issues of his controversial presidency and the challenges facing the world in its aftermath for the first time since leaving office in January.

“This is my maiden voyage,” Bush said, after a standing ovation had
subsided, at the outset of his speech today at the Calgary Telus Convention Centre.

But the talk ultimately plumbed the rhetoric of his presidency, as Bush urged his listeners not to forget the “murderers” who struck the U.S. on Sept. 11, 2001 and who could do so again. “We must keep them on the run and put them to justice wherever they light,” he said.

ALSO AT MACLEANS.CA: “They got the shoe cannon, eh”: While awaiting George W.’s arrival, two worlds collide on Calgary’s Stephen Avenue. And why Calgary was the first stop on his speaking tour.

The address, followed by a relaxed on-stage conversation with former New Brunswick premier Frank McKenna, who briefly served as Canadian ambassador in Washington, D.C. during the Bush presidency, was wide-ranging and anecdote-filled but dwelt for the most part on the impacts on his presidency of terror and the 9/11 attacks.

Arguing that the world is now in the grips of “one of the great ideological battles of all time” between the forces of freedom on the one hand, and freedom-hating extremists on the other, Bush called upon his audience “to never forget.” He added: “I believe freedom is a gift from a universal god.”

He delivered the address before a $400-a-plate luncheon audience of business people who had braved the heckles of boisterous anti-Bush protestors outside, then the indignities of an intimate frisk by security guards inside, to hear the former president.

Though Bush did not refer to the protestors assembled outside with signs and a pile of shoes, a nod to the Iraqi journalist Muntazer al-Zaidi, last week sentenced to three years for the caper, Bush did note that some of  his decisions over eight years as president had damaged his initial popularity. “Popularity is nothing,” he said at one point. “It’s like the wind—it comes and goes.”

He recalled the day that began his “war on terror” with vivid detail. “I was deeply affected by Sept. 11,” he said, describing how he was enveloped on Air Force One by “a fog of war—no one was certain what was going on.” Bush recalled how he had located his wife, Laura, in D.C., and his parents, former president George H.W. Bush and his mother Barbara, in Minneapolis. “They grounded our plane,” she told him.

Defending his decision to invade Iraq in 2003, Bush argued the Middle East is today a safer region than it would have been had Saddam Hussein remained in power to compete with Iran for nuclear supremacy. “The Iraqi people are better off without Saddam Hussain in power, no ifs, ands or buts,” he said.

He urged the international community to squelch the threat of a nuclear Iran by pursuing tougher sanctions and by using the new democracy of Iraq to model a compelling alternative for Iran’s people. Bush also appealed to Canadians to support the Canadian government’s efforts in Afghanistan.

But Bush’s speech also dealt with the challenges of the current economic disaster and President Barack Obama’s efforts to diffuse them. “I want the president to succeed,” Bush said in a thinly veiled reference to conservative talk-show host Rush Limbaugh, who has very publicly hoped for Obama’s policies to fail. “I love my country more than I love politics,” added Bush.

“He was not my first choice for president,” Bush said of Obama, “but when he won I thought it was good for America.” He described being moved when seeing crowds of African Americans on television weeping at Obama’s presidential victory.

Launching into comments focused on the current economic turmoil, Bush cautioned that they should not be seen as criticisms of Obama’s policies. “He deserves my silence and if he wants my help he can pick up the phone and call me,” said Bush. “I think it’s time to tap dance off the stage.” But in a broad hint that Obama’s policies might stifle what Bush characterized as the entrepreneurial spirit of the U.S., Bush cautioned that America should not “substitute government for the marketplace” and disparaged the notion of letting “a bunch of elites sit around and decide” how to spend money.

He warned equally of the dangers of a new protectionist strain in American politics, citing the $1.5 billion in daily trade between the U.S. and Canada. “I’m a free trader to the core,” he said.

Addressing the energy sector that is the heart of Calgary’s business community, Bush argued that technologies that stem the flow of greenhouse gases into the atmosphere could only be developed in a time of prosperity—one that depends on the exploitation of hydrocarbon resources in the U.S. and Canada. “In order to be prosperous, we need to use all the resources at our disposal,” he said.

Though he acknowledged that “global warming,” as he put it, “could” pose a major threat to the planet, Bush ridiculed the notion of the U.S. leaving aside Canada’s oil and gas resources. “I want to thank Canada for being a reliable source of energy,” he said. Try having Venezuela as our major source, he suggested, a barb directed at Hugo Chávez–“and see how that goes.”

There was also levity. Bush recalled the 19th century duel between a former secretary of the treasury, Alexander Hamilton—who died as a result—and Aaron Burr, the sitting vice president. “At least when my vice president shot somebody, it was by accident,” Bush said.

And he told a story he said he had recently related to Prime Minister Stephen Harper, about introducing Vladimir Putin to his Scottish Terrier, Barney. To Putin, the dog “looked like a Monopoly piece.” Later, in Russia, Putin asked Bush if he would like to meet his dog. “So out bounds this huge hound,” said Bush. Putin looked at Bush: “Faster, stronger and bigger than Barney,” Putin, then president of Russia, told Bush.

Quipped Harper when Bush finished the story: “At least he only showed you his dog.”