Get real. Jagmeet Singh has been dealing with racist hecklers for months.

Wherever Singh goes, the odious fog of Canadian race politics—billowing out of the yawning pits of passive-aggressive antipathy—is sure to follow 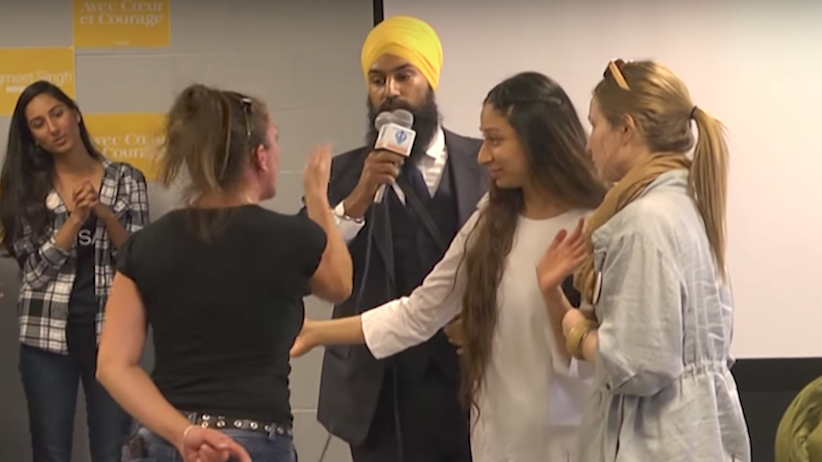 The first time I met Jagmeet Singh in the summer of 2011, racial politics was unspoken in the conversation but present regardless. At the time, Singh and his campaign team were walking through the Toronto Caribbean Carnival, passing out t-shirts. Singh was running in Bramalea-Gore-Malton, which was one of the areas I’d lived as a child, and where some of my family members still call home. I took a t-shirt and wished him luck on his run, adding that getting elected in that riding would be light work. I think about that exchange every so often, and I’m ashamed at my comment. The subtext, of course, was that a young and handsome turban-wearing Sikh would have no problem getting elected in the same riding that made Gurbax Malhi the first such candidate in the western world to do so.

The second time I met Jagmeet Singh, racial politics were at the crux of a community consultation on carding (a fittingly polite and bureaucratic Canadian spin on racial profiling) by Toronto Police. Singh, by then an elected MPP, attended the meeting to add his voice to the chorus of community members who demanded that the practice be abolished province-wide. Not long before, Singh tweeted and spoke about his personal experiences being profiled by police in Toronto and Windsor, saying the experiences made him feel “like I just didn’t belong.”

The third time we were in the same room, at his campaign launch in Brampton, he was confronted by a man in a Panama Hat who had some bizarre questions about Sharia law. I bring all of this up because it seems that wherever Jagmeet Singh goes, the odious fog of Canadian race politics, billowing out of the yawning pits of passive-aggressive antipathy, is sure to follow. Last week, it bookended his campaign when Jennifer Bush (a woman aligned with white nationalist organization Rise Canada) accosted Singh at a campaign event, asking him “When is your Sharia going to end? We know you’re in bed with the Muslim Brotherhood.” Singh, for his part, remained poised and unflappable. Bush’s approach, though, wrapped in the gauche cloak of overt racism, brought her viral infamy and simultaneously generated widespread sympathy for Singh.

After the encounter, several publications described his response as “classy” and “gracious.” VICE tweeted the story about the encounter, stating “This is how you deal with a racist heckler.” And Andrew Coyne was, of course, Andrew Coyne, wondering why Singh didn’t logic-bomb Bush into embarrassment by stating he is not a Muslim. But Jennifer Bush, a woman who quite obviously has no political views worth taking seriously, makes for a convenient scapegoat. In Canada, racialization is at its most acceptable when it comes in the form of polite questions uttered by serious thinkers. And for several months, those serious thinkers busied themselves with this well-dressed and beturbaned curiosity.

There was, for example, the fretting over the complicated nature of Singh’s “Québec Problem;” the possibility that Quebec voters, who helped sweep the NDP into opposition status in the 2011 federal election, would abandon the party if Singh were chosen to lead it. There have been columns speaking of Singh’s campaign as “insurgent,” as if a politician who’s been name-checked and profiled for years by the likes of Toronto Life and GQ magazine (in a way that no Canadian politician alive, save for Justin Trudeau, could possibly relate) was overstepping his place by running for party leader. And then there was the question by Jesse Brady, co-campaign manager to NDP leadership contender Charlie Angus, as to whether Singh really managed to sign up 47,000 new NDP members.

Those questions, always posed in the innocuous voice of white curiosity with nonwhite achievement, should be familiar to anyone who followed Barack Obama’s 2008 Democratic primary campaign. The question as to whether he could be accepted by working-class white voters. The comments about his popularity being carried by his natty appearance and articulate speech, rather than his community and legislative accomplishments. The “either I won, or you cheated” narrative carried by bitter supporters of Hillary Clinton, a narrative that threatened to fracture the party itself until Hillary and Bill managed to mend party ties at the Democratic convention. Right up until Barack Obama swore the oath of office, there was the sense that something was utterly wrong here, that his candidacy upset the natural order of things, and that the country was not yet ready for him.

This is not to say that Jagmeet Singh is Obama’s Sikh analogue north of the border, but the script for racialization has always made for thin reading. There is nothing complicated about the suggestion that Quebecers are not comfortable with his “religiosity,” there’s simply the belief that white Quebecers are too racist and xenophobic to support the NDP if it elects a brown-skinned leader who will not placate their bigotry. There’s no “insurgent” campaign at work to upset the established order of the party, there’s simply a popular candidate who, by all appearances, is poised to demonstrate why Canadians of colour not only deserve a seat at the table, but can pull up a chair at its head. And whether or not Singh has indeed signed up enough members to win the leadership in the first round of balloting, his campaign has so far succeeded at a level that most party leadership candidates could only dream of.

Yet taken as a whole, the response to his campaign from the political class seems to be that Singh should hang back in Brampton until the rest of the country—a country which prides itself on not being as despicably racist as America—has evolved enough to accept him. At a time when white nationalists have crawled out of the dirt to murder people in the streets, shoot up and firebomb mosques, and taint the office of the U.S. president, this is not a good look. Regardless of the NDP convention outcome, Jagmeet Singh has, so far, made his candidacy look like light work. But the way he handled Jennifer Bush wasn’t the true demonstration of his class and grace. It’s the way he’s handled Canada’s serious thinkers, who can’t help but find polite ways to explain why he doesn’t belong.