Gilles Duceppe: Coming to a city near you

Sometimes, "it'd be way easier if Quebec wasn’t around" 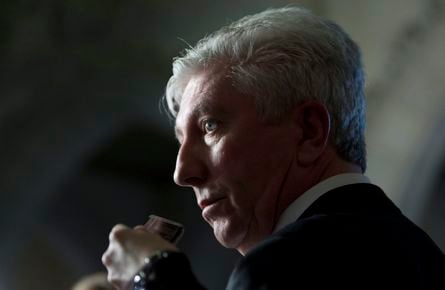 Twenty years after the Meech Lake negotiations collapsed, leaving Quebec as the only province without its signature at the bottom of the Constitution, Bloc Québécois leader Gilles Duceppe is still looking for someone—anyone—in the rest of Canada who’s still interested in talking about Quebec’s plight.

“Canada hasn’t made any offers” that would entice Quebec to sign on to the Constitution, Duceppe said in an interview with Macleans.ca, “and I don’t think any are coming.” And that’s true, he adds, no matter what the federal government looks like. “When there’s a majority government in Canada, they say ‘we have a mandate and it’s to not make any offers.’ When it’s a minority government, they say ‘we’re not in a position to make an offer.’ We’re forced to conclude, then, that Canada is a take-it-or-leave-it proposition.”

So why is Duceppe flying across the country, meeting with students, teachers, think-tanks and other groups if the only solution to Canada’s Constitutional woes is independence for Quebec? It isn’t entirely clear, though he does appear keen to wrap Quebec nationalism in kinder, gentler terms—terms that appeal to Canadians’ innate nationalism as much as much as that of Quebecers.

The Bloc leader readily admits Quebec plays a large role in the perpetual holding pattern in which Ottawa finds itself when it comes to sweeping institutional reforms. In fact, his Canadian tour, his first since 2005, is explicitly motivated by a desire to remind people of it. “Take Senate reform, for example,” he says. “It’d be way easier to do if Quebec wasn’t around.” And with the prospects of Canadians suddenly developing an appetite for the Constitutional reforms residing somewhere between slim and none, Duceppe says the Bloc’s role in Parliament will continue to be at least partly an obstructionist one. “We have to be there,” he says, “to fight the setbacks Quebec is subjected to in the Canadian federation.”

For what it’s worth, some Canadians appear to have come to the same conclusion as Duceppe—that Canada and Quebec would both be better off without each other—though it may not be for the relatively enlightened reasons Duceppe has in mind. According to an unusual poll by Léger Marketing for the Association for Canadian Studies that looked into Canadians’ attitudes toward Quebec’s sovereigntist aspirations, one in six English Canadians (15 per cent) is comfortable with the idea of waving the province goodbye. Support for Quebec’s departure was highest in Alberta (26 per cent) and Manitoba and Saskatchewan (22 per cent), the two areas (the poll treats Manitoba and Saskatchewan as one region) where official bilingualism is least popular, suggesting a hardening of attitudes against Ottawa’s languages policy rather than a new-found love for tiny nation-states.

Sovereigntists themselves have long had an uneven relationship with Francophone communities outside Quebec. During a speech in Windsor in 1969, PQ founder René Lévesque referred to the Francophone minority in English Canada as “dead ducks”; the stake was driven even further by Quebec novelist Yves Beauchemin in 1990, when he said Francophones outside Quebec were little more than “warm corpses.” Duceppe, however, says he’s made outreach to Francophone and Acadian groups a priority as Bloc leader and is quick to dismiss suggestions Quebec’s departure from Canada would have ill effects on either group. “People who say that are using Francophones and Acadians as cannon fodder,” he says.

With six consecutive electoral majorities in the province, the Bloc isn’t anywhere near the extinction that’s so often predicted for it. That said, as Duceppe himself points out, it’s been left in the lurch a bit by Canadians’ disinterest in addressing the issues so dear to sovereigntists. “I worked long enough as a union negotiator,” he says when asked what Quebec would want out of new Constitutional talks, “to know you don’t negotiate with yourself.” The Bloc leader may well find himself a rhetorical sparring partner by the time his six-city tour is done (stops in Calgary, Edmonton, and Vancouver remain). But if the “warm” and “respectful” receptions he says he’s received so far are any indication, he probably shouldn’t get his hopes up.