Halifax's anti-smoking revolution is all smoke and mirrors 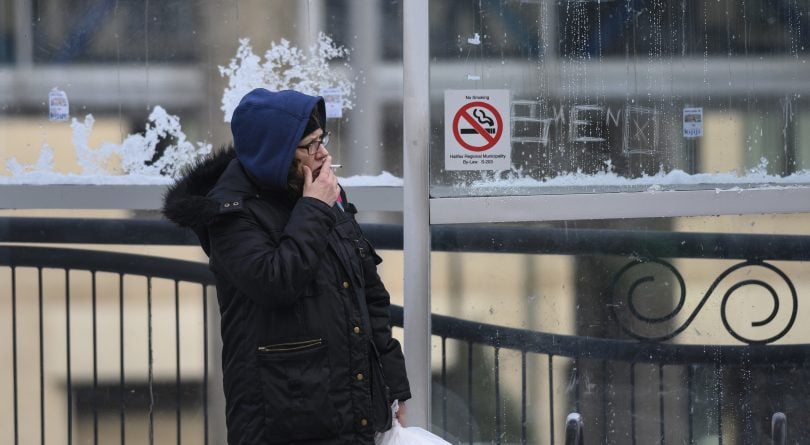 It’s lunchtime on an overcast weekday in downtown Halifax, and two carpenters in hardhats are flagrantly doing what many others in the city, which banned smoking just over a year ago, still do.

“I think it’s a ridiculous law,” said Mark Davis of Dartmouth while sucking on a cigarette on a street corner near bustling Spring Garden Road. “I just smoke wherever I smoke. If I’m walking down the street, I still smoke a cigarette. No biggie.”

It’s been a little over a year since Halifax banned all smoking and vaping almost simultaneously with the passage of a federal law legalizing marijuana (cannabis falls under the city’s bylaw). At the time, the ban was touted as one of the toughest in the country—a prohibition on lighting up anywhere in the city except for 84 designated areas marked by nondescript, waist-high black posts with built-in portals for butts.

These seemingly randomly placed stations, marked with small green stickers, are not exactly visible at a glance: to ﬁnd the nearest one, smokers are supposed to go online and use an interactive map.

Most don’t. And with virtually no enforcement, why would they?

In response to a query from Maclean’s, Halifax Regional Police said ofﬁcers have given out just 11 tickets since the ban took effect—most in the city’s downtown core when ofﬁcers noticed infractions, and one at a busy intersection where panhandlers often ask motorists for change. The RCMP, which does not provide street-level policing in Halifax but has ofﬁcers there on other duties, issued one. City bylaw ofﬁcers gave out none.

In short, 14 months after it came into force, the bold new law that won Halifax plaudits from anti-smoking advocates could be fairly described as smoke and mirrors. Many sidewalks still remain littered with butts. People puff where they please.

Some scenes from a recent day: outside a convenience store near Spring Garden Road, a portly man takes one last haul on a joint and chucks the still-lit end into the middle of the street. In the city’s entertainment district, a pedestrian strides up the sidewalk blowing smoke. Another stops to cradle a hand against the wind to light up. Davis, the carpenter on his lunch break, said that earlier in the day he’d walked past two parked police cars while happily pufﬁng. Neither ofﬁcer said a word.

“It’s smoke. It goes up into the air. It doesn’t bother people,” he shrugged, holding his lit cigarette towards his palm to keep it out of the wind. “It’s been this way for hundreds of years. Why change now? I understand bars and restaurants—that makes sense. But if you’re outside, you have to walk to a place just to have a cigarette?”

RELATED: When youth vaping skyrocketed, smoking did too

As Davis’s account of smoking in front of police suggests, many of those tasked with enforcing the bylaw may take the same view. In an email, Halifax Regional Police spokesman Const. John MacLeod said ofﬁcers do not “proactively seek out violations but do address any incidents that come to our attention.”

Sufﬁce to say, the overall sense of inertia is a vindication of sorts for Sam Austin, one of three city councillors who voted against the ban. In his failed bid to have tobacco dropped from it, he argued that an overall ban would be a “micromanagement of public space” that would impossible to enforce.

Smokers might use the designated areas if there is one handy, Austin acknowledges. “But if there’s not, they just smoke as they would before and that’s the norm. I don’t think it’s been terribly effective.”

Still, the city is defending the law, saying it doesn’t regard the ticket count as a measure of success; bylaw ofﬁcers are focused instead on education and compliance, says spokesman Brendan Elliott, much as they are when dealing with unsightly premises and barking dogs.

Robert MacDonald, president and CEO of the Nova Scotia Lung Association, commended the city on taking leadership to ban smoking—though he’d like to see more people abiding by it. It’s good health policy, he said, adding: “If a person has one less cigarette a day, it’s a beneﬁt.”

READ MORE: Need to learn how to smoke pot? Ask the government.

Perhaps, but many people seem unaware of the bylaw’s existence, despite a $150,000 ad campaign last year to promote it. The penalty for breaking the ban ranges from $25 to $2,000. If you fail to pay, you could—at least theoretically—go to jail for up to 30 days.

That was enough to scare Angulalik Pederson, a resident of Cambridge Bay, Nunavut, who visited Halifax in December. He said he heard about the law coming in on the plane—that you have to ﬁnd these “really tiny posts that are hard to see and smoke by them.”

Pederson said he would never have spotted the one outside the downtown convention centre he was at had a security guard not pointed it out.

While the law may seem bogus and impossible to observe—especially in the large swaths of the city that have no designated smoking areas—Austin admits it has been “mainly symbolic” and not terribly burdensome.

“We’ve got a couple of ashtrays out of it,” he said, referring to the portals built into the smoking-area posts, “and that gets some of the litter butts off the street. That’s about it.”

This article appears in print in the February 2020 issue of Maclean’s magazine with the headline, “Puffing outside the lines.” Subscribe to the monthly print magazine here.