After the North Korea summit, Trump said Trudeau's defiant stance against U.S. tariffs 'is going to cost a lot of money for the people of Canada'

After wrapping up his summit on North Korea, President Donald Trump held a press conference on Tuesday. The first question from the media called on Trump to explain what he’d meant, minutes earlier, when he described North Korean leader Kim Jong-Un as “very talented.”

“He is very talented,” Trump responded. “Anybody that takes over a situation like he did at 26 years of age and is able to run it, and run it tough. I don’t say he was nice, or I don’t say anything about it. Very few people at that age, you can take one out of 10,000 probably couldn’t do it.”

Trump’s praise of Kim as “tough” contrasted with his swipe at Prime Minister Justin Trudeau days earlier in a tweet, when he referred to Trudeau as “meek and mild” and “dishonest and weak.”

Here is Trump’s answer to that question, and a follow up, in which he discussed the now-famous photo of him sitting cross-armed across from German Chancellor Angela Merkel (“It was reported as sort of nasty both ways), his understanding of Canada’s trade surplus with the U.S. (“It’s either 17 but it could actually be 100”) and Trudeau’s press conference after the G7 summit (“Justin probably didn’t know that Airforce One has about 20 televisions”).

Here is a full transcript of Trump’s answers as they related to the G7 summit and Canada’s prime minister.

Reporter: It’s been a busy week for you on the international stage. You’re leaving this summit here in Singapore having determined that Kim Jong-un is a talented man. You left the G7 summit a few days ago in Canada having determined that Prime Minister Trudeau is weak and dishonest. What do you say to America’s allies who worry that you might be jeopardizing our long term alliances and worry that you might be treating you historic friends as enemies and our historic enemies as friends?

Trump: I had a very good meeting with the G7, and I left the meeting and, I’ll be honest, we are being taken advantage of by every one of those countries. Very, very seriously. Now, the United States, because of bad management at the top, because of presidents who didn’t care about trade or didn’t understand it, or whatever reason, for many years, with China being the most successful at it, but the European Union is second, $151 billion we lost. They were represented at the meeting.

READ: How Canada should react to Donald Trump’s G7 tantrum

And we’re being taken advantage of on trade. Canada does have very big advantages over us in terms of trade deficits. We have a big trade deficit with Canada. I was reading where, ‘oh, it’s actually a surplus’, it’s not a surplus. It’s either 17 but it could actually be 100. You know they put out a document. I don’t know if you saw it. They didn’t want me to see it, but we found it. Perhaps they were trying to show the power they have. It’s close to a $100 billion a year loss with Canada. They don’t take our farm products. Many of them. They charge what was 270 per cent but somebody told me the other day that a few months ago they raised it to 295 per cent for dairy products. And it’s very unfair to our farmers and it’s very unfair to the people of our country, the workers, the farmers, the companies, and we are not able to trade. They have tremendous barriers up, they have tremendous tariffs.

Anyway, we finished the meeting, everybody was happy, and I agreed to sign something. I asked for changes, I demanded changes. And those changes were made. In fact the picture with Angela Merkel, who I get along with very well, where I’m sitting there like this (crosses arms) that picture was we’re waiting for the document because I wanted to see the final document, as changed by the changes that I requested. That was a very friendly—I know it didn’t look friendly. And I know it was reported as sort of nasty both ways. I was angry at her, she… Actually we were just talking, the whole group, about something, unrelated to everything. Very friendly, waiting for the document to come back so I could read it before I leave. Anyway, I left  and it was very friendly. 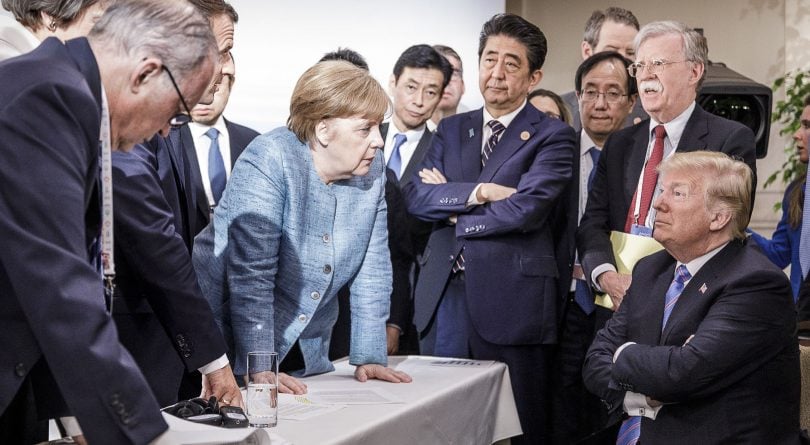 German Chancellor Angela Merkel deliberates with US president Donald Trump on the sidelines of the official agenda on the second day of the G7 summit on June 9, 2018 in Charlevoix, Canada. (Photo by Jesco Denzel /Bundesregierung via Getty Images)

Anyway, I got onto the plane. I think that Justin probably didn’t know that Airforce One has about 20 televisions. And I see the television, and he’s giving a news conference about how he will not be pushed around by the United States. And I say, push him around? We just shook hands. It was very friendly.

During a press conference in Singapore, President Donald Trump imitated Justin Trudeau’s closing remarks to the G7 meeting in Quebec.

Look, countries cannot continue to take advantage of us on trade. The numbers are out. Over the last couple of years, and over the last many years, but over the last couple of years, this country has lost $800 billion on trade with other countries. The biggest one being China. $800 billion. $151 billion with the European Union. They don’t take our agricultural products, barely. They don’t take a lot of what we have. And yet they send Mercedes into us. They send BMWs into us. By the millions. It’s very unfair. And it’s very unfair to our workers, and I’m going to straighten it out. And it won’t even be tough.