High hopes: Legalized pot is on the way

As marijuana producers gear up to sell to the masses, the feds have some hurdles to clear

Walking into the lobby of Tweed Marijuana Inc. in Smiths Falls, Ont., is like entering a sleek but bare-bones start-up, all polished concrete floors and white walls: visitors are greeted by a vintage-looking cabinet displaying jars of the company’s wares on shelves above faded hardcover books, as well as a trendy wall of old candy ads—homage to the building’s previous life as a Hershey factory. Men in sneakers with well-groomed beards wander in and out. But this isn’t some hipster PR firm—Tweed is at the vanguard of Canada’s medical marijuana industry, readying itself for the multi-billion-dollar market for legal marijuana expected to take root under the newly elected Liberal government.

But first things first. Moving from illicit to licit requires regulations that allow enough of a legal market to dry out the black one—ideally, while bringing in much-needed tax revenue—and a blend of stiff penalties for rule-breakers and funding for education and addiction treatment.

The Liberals named Scarborough Southwest MP and former Toronto police chief Bill Blair to lead the way. As parliamentary secretary to the justice minister, he’s charged with coordinating with Health Canada, Public Safety and each of the provinces. Blair won’t be pinned down to a specific deadline, pointing out he’s new to Parliament and its processes. But he allows he’s encouraged by recent opposition support for regulation as the best way to protect communities. “I’m also hoping that this will be an effort that all of us can get behind and work together on to make sure we do it right,” he said in an interview with Maclean’s. “We want to do it right.”

The pending green rush has producers eager to help him with that task. Tweed recently turned to a high-powered lobbying firm to make the case for a simple expansion of the existing medical marijuana model. That would mean allowing already licensed producers to sell online and send the product by mail—rather than in liquor stores, as some premiers propose. Tweed argues that using the medical marijuana model is the most straightforward way to ensure product quality and consistency, as well as being speedy to implement. “There’s a lot of things to work out,” said Tweed president Mark Zekulin, who estimates it could take years for each province to set up its own distribution model. Were Canada to use the existing system, “I think you could see that within a year,” he said.

Meanwhile, the illegal dispensary system—private pot retailers who sell a product that isn’t inspected for potency or purity—continues to thrive. Vancouver, which has about 100 dispensaries, has moved to license and regulate them rather than have no rules at all. Even interim Conservative leader Rona Ambrose, who has previously suggested the Liberals wanted to make it easier for kids to buy marijuana, now says the government needs to move to regulate dispensaries. 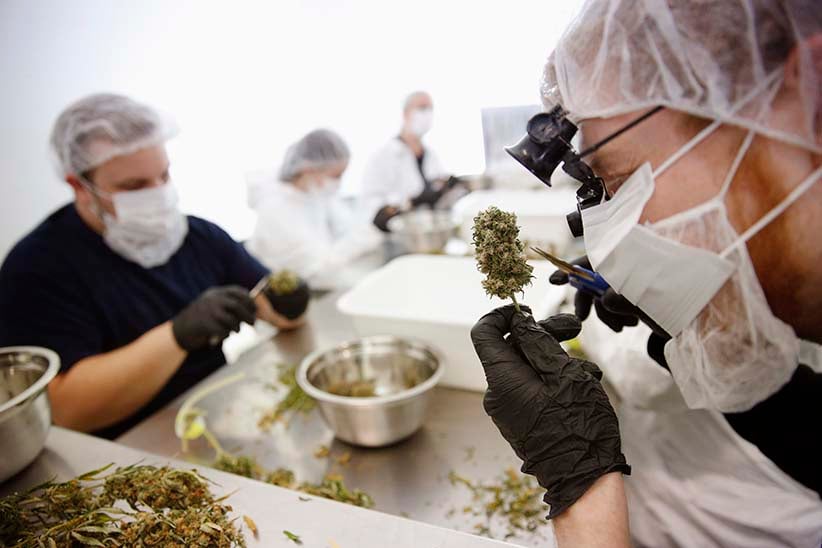 Currently, the only way to buy marijuana legally is to have a doctor’s authorization (Health Canada doesn’t use the term prescription because pot doesn’t go through its drug review process) and order through one of 27 licensed producers—including Tweed. Those producers require a licence to grow, as well as a licence to sell, for which they undergo regular inspections by Health Canada.

Conforming to Health Canada rules can be overwhelmingly expensive, requiring high security like biometrics to limit access to plants and heavy-duty vaults to store the product, as well as extensive protocols to track plants from seed to shipping. Start-up costs can range from $5 million to $10 million. No wonder that, of 1,284 production applications received by Health Canada as of last March, almost 75 per cent were rejected or withdrawn. The vast majority were deemed incomplete.

The result of a successful application, however, is a sight to behold. Built in a cavernous warehouse, Tweed’s facility features spotless rooms filled with rows of bright green plants, labelled and tagged for tracking. The company keeps 12 flowering rooms and has space to expand by an additional 18. Each flowering room has 500 plants bathed in the kind of bright yellow light that bursts from the door like some kind of heavenly glow. The scent of marijuana, surprisingly, is no stronger than if you were to catch a whiff of someone puffing on a joint as they walked past. That could be due to the ventilation system chugging away overhead, making yelling the easiest way to communicate.

Given what Blair calls the “onerous” regulations imposed on licensed producers, legal producers sometimes portray the dispensaries in comparison as irresponsible sellers dealing in pesticide or mould-tainted weed. But many dispensaries have fought for regulations, including the B.C. Compassion Club Society, says spokeswoman Jamie Shaw, who is also president of the Canadian Association of Medical Cannabis Dispensaries. Shaw says some dispensaries have their marijuana tested, but it’s hard to prove, as the labs do it off the books and won’t provide paperwork.

The Liberals say regulation would let them test for additives, as well as require labels telling consumers how strong the marijuana is. It would also allow advertising and packaging rules, similar to restricting marketing for tobacco. Andrew Freedman, director of marijuana coordination in Colorado, where pot was legalized two years ago, says he is watching to see how his state’s licensees start marketing their products. “Roughly 20 per cent of the [marijuana] users use 80 per cent of the product, so when licensees a few years down the road get sophisticated enough to really advertise and commercialize their brand, we are going to have to worry about what commercialization does to potentially drastically increase the number of users,” he told Maclean’s.

Freedman says there are a few things he wishes Colorado had done differently, including starting its public education campaigns sooner to avoid the lag between easier access to pot and increased public awareness of the potential harm. The state is also likely to reduce the initial tax rate of 10 per cent for recreational weed (15 per cent on wholesale purchases), which is on track to put US$100 million in its coffers this year. Too high a tax drives up the price and can mean users would rather go to an illegal dealer than a legitimate seller. Too low a tax could mean there’s profit to be made in selling it illegally outside the state. “We have to find this very sweet spot [where] the price is just at the right place where people don’t want to ship it out in pounds, but not so high as to allow the black market to thrive,” Freedman said, calling it a guessing game. “It’s a complicated enough issue that I would leave myself breathing room to come back and change things down the road.”

For his part, Blair is looking closely at a report by the Centre for Addiction and Mental Health, noting pot is harmful to teens and people with mental illness, as well as to heavy users. CAMH recommends banning pot marketing, advertising and event sponsorship, as well as maintaining a government monopoly on sales. The former police chief hopes to have more to say publicly in the next few weeks about the initial steps toward legalization.

If the 2015 election was at least in part about whether to legalize marijuana, with the Conservatives staunchly opposed and the Liberals resolutely in favour, the next debate will focus on how best to make that happen. It’s clear from Tweed’s forest of marijuana plants and high-tech facility just how much has been invested beyond the halls of power. The stakes are high—in more ways than one.