“His rifle was pointed toward the chest” 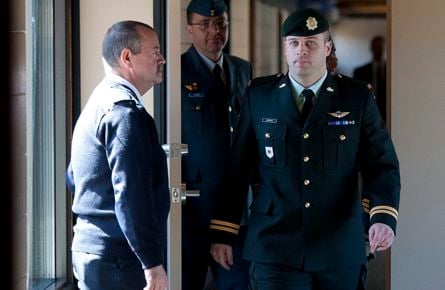 Cpl. Steven Fournier snapped two photographs of the injured Taliban fighter, just in case the bearded man turned out to be a high-value target. It was Oct. 19, 2008, and as the camera clicked, Capt. Robert Semrau stood nearby, hovering over the badly wounded insurgent. “As I crouched down, I can hear a moan and a groan,” Fournier testified on Tuesday. “He wasn’t dead yet.”

Satisfied with his pictures, Fournier switched off the digital camera, grabbed his gun and began to walk away. He took only a few steps before the gunfire rang out. “I hear two shots behind me, in quick succession,” said Fournier, who immediately turned back around. “I see Capt. Semrau bringing his rifle to a slung position while he closes his ejection port. His rifle was pointed toward the chest of the person lying on the ground.”

Semrau is facing four charges, including second-degree murder, for the alleged “mercy killing” of an unarmed enemy fighter in Helmand Province, Afghanistan. Military investigators never found the man’s corpse, and there is no forensic evidence linking his death to the captain’s C-8 rifle. But 18 months after the unprecedented charges were first laid, Fournier’s dramatic testimony offered the first real glimpse of what may have happened that day.

Semrau and Fournier were part of the same four-man Operational Mentor and Liaison Team (OMLT), a special unit of Canadian soldiers attached to a company of troops from the Afghan National Army (ANA). Their job was to “advise” the Afghans on basic soldiering skills, but they had no authority to give orders. On that particular morning, Semrau’s team was on patrol with ANA soldiers in a dangerous region near Lashkar Gah when they stumbled across the wounded man lying on a dirt path. It appeared as though he’d been shot out of a tree by a U.S. Apache helicopter.

Fournier said the unnamed insurgent had a “fist-sized laceration” in his stomach, and that one of his feet was mangled and bloody. “It was held on by some flesh and rotated 180 degrees,” he said. According to Fournier, the ANA commander on scene (Capt. Shafiqullah) said the enemy fighter was too wounded for medical treatment, and ordered his troops to continue moving south. “If Allah wants him, he will die,” Fournier quoted the captain as saying. “If not, he will live.”

The Geneva Conventions and the Canadian Forces Code of Conduct compel our troops to administer First Aid to all casualties, friend or foe. Under questioning from Capt. Tom Fitzgerald, the lead prosecutor, Fournier admitted that neither he nor Semrau provided any medical assistance to the man, even though they were equipped with pressure bandages and tourniquets. But Fournier also hinted at what could be a key part of Semrau’s defence: because the Canadian OMLT team had no authority over the Afghans, they could not overrule Capt. Shafiqullah’s decision to keep moving.

Fournier also said it would have been unsafe to dispatch an ambulance or a Medevac chopper into such an unsecured area. “Capt. Semrau said we would not treat him based on what the ANA commander said,” Fournier testified. “He said we should comply with what the ANA said.”

Minutes after encountering the man on the path, ANA soldiers found another Taliban fighter nearby—this one clearly dead. It was then that Fournier suggested photographing both casualties for intelligence purposes. Semrau agreed, but in a sign of just how careful the Canadians were with their Afghan hosts, he asked Capt. Shafiqullah’s permission. The ANA commander reluctantly agreed, but only on the condition that Fournier photograph the men’s faces, and not their wounds.

Fournier, still a private at the time, snapped two pictures of the dead man first, then headed back toward the other casualty lying on the path. Semrau followed, as did an Afghan interpreter nicknamed “Max.” As they came closer, Fournier said he could see the man move his arm and roll slightly on his side.

Fitzgerald asked Fournier what happened after he took the second set of photos.

“Capt. Semrau tells myself and our interpreter that we can head back because we don’t have to see this.”

“Did he explain what he meant by that statement?” Fitzgerald asked.

“I understood it to mean I don’t have to stand here and watch a man die, sir.”

Semrau is the first Canadian soldier ever accused of homicide on the front lines of a war, and if convicted, faces a mandatory life sentence with no chance of parole for ten years. The 36-year-old has pleaded not guilty.

Fournier is scheduled to continue his testimony Wednesday morning.