Some of the biggest, and strangest, criminal hauls in Canadian history 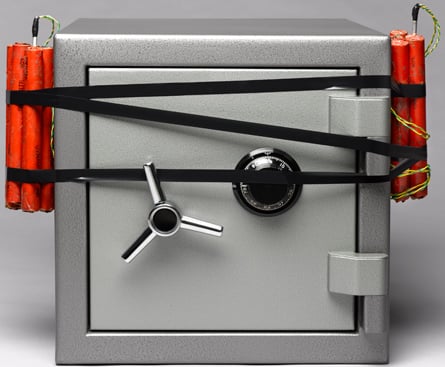 What are some of the biggest—and weirdest—robberies in Canadian history? Here’s a sampling:

1. Railway robbery: Only two trains have ever been robbed in Canada but both fell victim to Bill Miner. Miner, with the help of fellow crook Shorty Dunn, committed Canada’s first train robbery in Sept. 1904. The duo held up a CPR engine in B.C. and netted $10,000 in gold and bonds. Miner’s second train robbery was a gunpoint holdup of the CPR Transcontinental Express in Ducks Landing, B.C. Though Miner’s gang only landed $15 and some liver pills, this  attempt cost Miner his freedom. He was arrested and sentenced to life in prison, but soon escaped.

2. The Flying Bandit: Ken Leishman, a pilot turned thief from Winnipeg, captured the public’s imagination in the ’60s and ’70s with his daring aerial escapes and non-violent methods of thievery. In 1966, he was the mastermind behind what was then Canada’s largest gold robbery—about $400,000 worth of bullion. Armed with the knowledge of when flights carrying gold arrived at the Winnipeg airport, Leishman and four accomplices dressed up as freight handlers, walked onto the tarmac, stole a truck loaded with 12 crates of gold bars, and drove off. Leishman was arrested but escaped from prison. He was later imprisoned, but upon his release in the mid-’70s, moved to Red Lake, Ont., where he became a successful businessman.

3. ‘Machine Gun Molly’: Monica Proietti, a notorious Quebec bank robber, was only 27 when she planned her last big score. Wanting to retire to Florida with her children, Proietti set out on September 19, 1967, with two accomplices to rob a Montreal credit union. But the $3,082 score set off a high-speed police chase, which ended for Proietti when she was shot through the heart.

4. The ‘beer bandit’: Wade Haines, an unhappy truck driver who wanted to get away from it all, claims he left his rig on the side of the road near Fredericton and started hitchhiking west in August, 2004. Problem is, Haines never had a good explanation for what happened to the 54,000 cans of Moosehead he had been hauling. Police eventually caught up with Haines in Peterbourough, Ont. (and small stashes of the brew were later found scattered in N.B.). He was convicted of theft and sentenced to 19 1/2 months in jail.

5. The Gem Star heist: In February 2007, while the owner of Gem Star, a jewelry store in North Toronto, was out of the country on business, police say thieves cut the phone lines, disabled the security system, and worked through the night to crack the safe. The crooks — along with about $5 to $6 million in shiny rocks — vanished without a trace.

6. What do you do with all that bull semen?: In one of the strangest crimes in Canadian history, a 20-litre tank filled with $25,000 worth of liquid nitrogen, bull semen and embryos was stolen from a Cowichan Valley farm in March. Though police don’t have any suspects, they believe the crook is a rival farmer.