He's a libertarian, perhaps, but the newest member of the Supreme Court of Canada is no Antonin Scalia 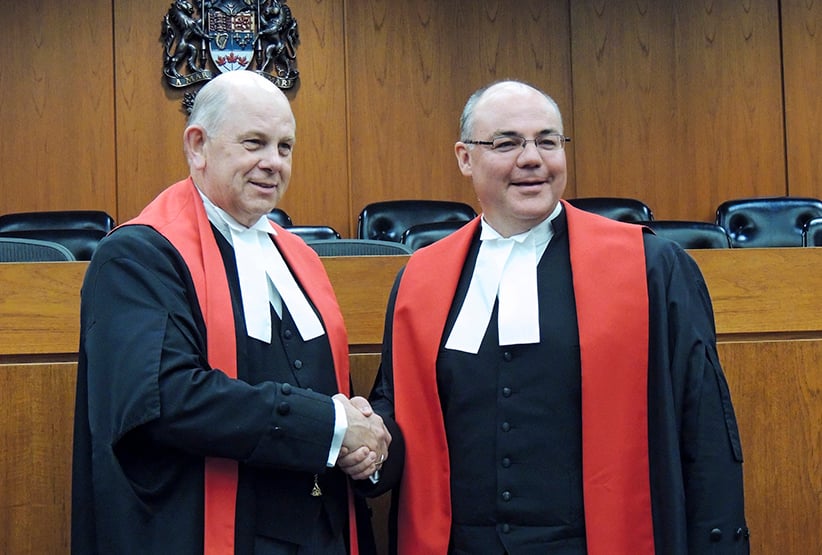 Justice Russell Brown is congratulated upon his appointment to the Supreme Court of Canada. (University of Alberta)

In what’s possibly a Canadian judiciary first, the incoming Supreme Court of Canada justice Russell Brown appears on a testimonial webpage right next to Ezra Levant. The squeakiest wheel on Canada’s freedom train was extolling the Justice Centre for Constitutional Freedom’s “commitment to free speech,” while above, the former University of Alberta law professor commonly known as Russ, said: “Current events remind us that the notion of limited government—particularly as it pertains to freedom of conscience and freedom of expression—can never be taken for granted in Canada.” The conservative legal group’s website erased Brown’s quote hours after Prime Minister Stephen Harper announced his appointment to the high court, Brown’s second promotion since Harper made him a judge in 2013.

Internet archive searches reveal Levant and Brown as blurb brothers again on a bygone Canadian Constitution Foundation page: The jurist extols the virtue of restoring limits on government interference, while Levant urges the group to “keep up the fight.”

Brown is the eighth Supreme Court judge named by Harper. But if the country’s freedom-fighting judicial conservatives are pleased to have one of their own on the bench—replacing Harper’s first Supreme Court pick, Marshall Rothstein—they are not exactly a giddy group.

The court that’s been composed mainly of Harper picks since 2012 has dealt his Conservative government setback after setback, on mandatory minimum sentences, prostitution, Aboriginal land title, assisted suicide, and whether weed brownies can qualify as medical marijuana.

“Newly appointed Russell Brown, who holds views the SCC has rejected, joins a Court that increasingly adopts what it previously rejected,” tweeted Rainer Knopff, a University of Calgary political scientist and co-author of The Charter Revolution and the Court Party.

Accounts of Brown from Alberta and beyond widely describe him as open-minded, fair, thoughtful and generally a nice guy—a libertarian, perhaps, but no judicial pitbull or iconoclast, like the more sharply divided U.S. Supreme Court’s Antonin Scalia. Brown has spent a short two years in a judge’s robes, but, at 50, will get the chance to spend another quarter-century until mandatory retirement from that job. There may not be another opening on the court until Chief Justice Beverley McLachlin turns 75 in three years. And with an election coming, this could be Harper’s last chance to appoint a conservative justice.