How Doug Ford became an issue in the B.C. electoral reform campaign

The debate is already bitterly divided, with both sides claiming the other's system opens the door to extremists 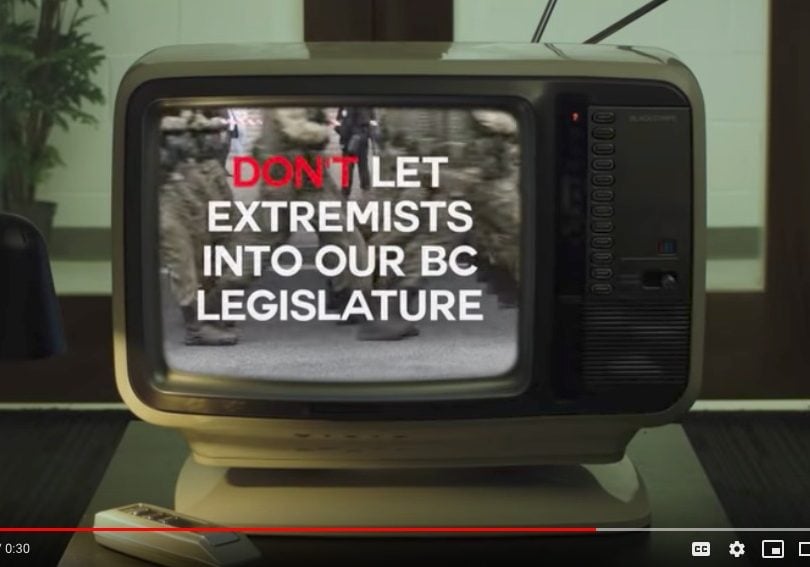 Goose-stepping soldiers feature in a No side video ad in the B.C. electoral reform campaign (YouTube/Vote No to PR in BC)

This is the inflammatory imagery in a video released last week by Vote No to Proportional Representation in BC, a self-explanatorily named lobby group that launched the television and social media advertisement as B.C.’s referendum ballots began to arrive in mailboxes. “Under proportional representation, extremists are elected to legislatures with disastrous results,” the ad states unequivocally.

The video has elicited cries of fear-mongering from PR supporters, whose favourite counter to the argument that PR gives power to extremist, fringe parties is to point to certain politicians elected under the first-past-the-post systems—namely Doug Ford in Ontario and Francois Legault in Quebec, and to President Donald Trump in the U.S. “Both Ontario and Quebec have threatened to use the notwithstanding clause to override the Charter of Rights and Freedoms,” says Maria Dobrinskaya, spokesperson for Vote PR BC. “And to me that’s an indication of a type of extreme politics that’s disregarding an important democratic institution and basic human rights.”

That argument is overblown, shoots back Bill Tieleman, a co-founder of the Vote No to PR group that released the video. Ford and Trump are not neo-Nazis. But under a PR system, it is possible for true neo-Nazis to gain strength, he says. People shouldn’t just say, “Oh, this is a little debating club where we don’t talk about what’s going on in other places in the world because it could never happen here.”

There is all manner of overheated rhetoric accompanying this referendum, B.C.’s third on electoral reform. And it’s a far cry from the measured, almost scholarly debate that preceded the unsuccessful 2005 vote on a single transferable vote system—perhaps because that model was designed by a citizen’s assembly, and because the government of the day did not take a position during the ensuing campaign.

This referendum has been more politicized from the get-go. NDP Premier John Horgan along with Green Party leader Andrew Weaver are actively campaigning for the Yes side. Horgan has no choice in the matter. His fragile government depends on support from the Greens who have the most to gain from PR and threaten to bring down the government if Horgan doesn’t throw his heft behind PR. Last week, Horgan launched his pro-PR campaign with a rally where he decried his Liberal opponents for using “fear and hysteria” to bolster the No vote.

PR is not universally popular within the NDP. Tieleman is a long-time New Democrat who fought against the single transferable vote system proposed last time around has now joined former Liberal Party of BC attorney general Suzanne Anton and others to form Vote No to PR BC. Tieleman makes no apologies for the ad. “We need to get people’s attention.”

He visited Europe this summer and says he was disturbed by the rise of neo-fascism and the increased power of extremist parties. “PR hasn’t created extremism, but it has enabled extremism. People say we are fearmongering, but there is a lot to fear,” he says. The Sweden Democrats are a party with past links to neo-Nazi activities that now has seats in Parliament, he says. Likewise, Austria’s Freedom Party, whose founder has been cited for neo-Nazi activities, holds important cabinet positions.

RELATED: Why B.C. might actually get proportional representation this time

Yes side proponents agree the rising clout of extremist and populist political parties in Europe is cause for concern. They just don’t blame PR for the trend. Max Cameron, a University of British Columbia political science professor, who favours PR and helped advise the government on the referendum questions, says many factors contribute to Europe’s shifting political landscape. The continent is reeling under the strain of the largest migration of people since the Second World War, the fallout from the conflict in the Middle East Syria and Iraq.

It also has some of the best-developed welfare states, Cameron says. “So, when you combine the pressures on existing resources with the magnitude of the migrant crisis, you’re going to have a political backlash.” He believes the shift would have been reflected in a first-past-the-post electoral system as well.

Cameron does not believe PR will lead to neo-Nazis and fascists in the B.C. legislature. “Those parties are very small, they have very few followers and they don’t generally get over the threshold,” he says. They sometimes win a few seats and when they do they are shunned by the other parties. Faith Goldy, a far-right fringe candidate who recently ran for mayor of Toronto, only got 3.4 per cent of the vote, he notes.
Dobrinskaya says threads of extremism are hidden in Canada’s large mainstream political parties. There were incidents in the last federal election that should raise alarm bells, she says, citing a pledge by the Conservatives to set up a cultural barbaric practices hotline as just one example. The best way to combat extremism is to “double-down” on strengthening democracy to ensure those who are dissatisfied have a way to express their views. That means not handing “100 per cent of the legislative power to a government intent on trampling on human rights.”

RELATED: How Doug Ford could help us get electoral reform

Cameron hopes the temperature of the PR debate is dialed back during the weeks leading up to the close of voting on Nov. 30. There are many valid arguments and differences of opinion about whether PR gives smaller parties blackmail power and contributes to the rise of right-wing populism, extremism and party fragmentation. “Why don’t they use those rather than trying to frighten people with those images and apocalyptic claims?”

But Tieleman’s group has no plans to soften its approach. The NDP injected itself into the debate, he says. “We’re not at all embarrassed to say, we’re pulling out all the stops.”