How Kim Cattrall got a date with Pierre Trudeau

Amid a 60 Minutes controversy over a photo mix-up, we dug into the archives to hear from Kim Cattrall on how she met P.E.T. 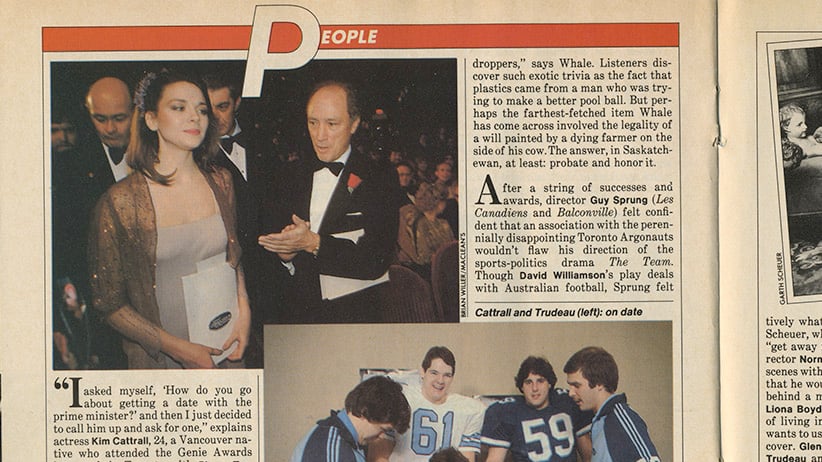 It may have been the most buzzed-about moment in a 60 Minutes profile of Prime Minister Justin Trudeau that largely fizzled. As Lara Logan narrated Justin’s fraught childhood as the son of a PM father and a mother who struggled with undiagnosed bipolar disorder, a B-roll image of Canadian actress Kim Cattrall—not Margaret Trudeau—flashed on screen. Cattrall, who, at 24, was a year away from appearing in the blockbuster film Porky’s (the second-highest-grossing Canadian film of all time), had in fact dated the senior Trudeau, who was then 62. We unearthed an explanation from the March 23, 1981, issue of Maclean’s about the unique circumstances of their meeting:

“I asked myself, ‘How do you go about getting a date with the prime minister?’ and then I just decided to call him up and ask for one,” explains actress Kim Cattrall, 24, a Vancouver native who attended the Genie Awards last week in Toronto with Pierre Trudeau. Cattrall met the prime minister at the December opening of the film Tribute, in which she co-stars with Jack Lemmon and Robby Benson. The pair hit it off and have been “in touch” ever since by telephone between Ottawa and Cattrall’s home in Los Angeles.

“He’s certainly a dream of a date. Very charming, kind and a total gentleman,” says Cattrall, who provided her date with the $100-a-person tickets, which she got free as a presenter. After the awards, the couple went to dinner and wound up the evening at the after-Genie party where they partook of “a little cha-cha and a little waltz.”

Forget about Tinder. Turns out all you need to snag a date with a world leader is the right phone number and a little bit of moxie.