Paul Wells: Overdoses killed 1,422 people in B.C. last year. For one doctor the solution is to "offer people the opportunity to get drugs that won’t kill them." 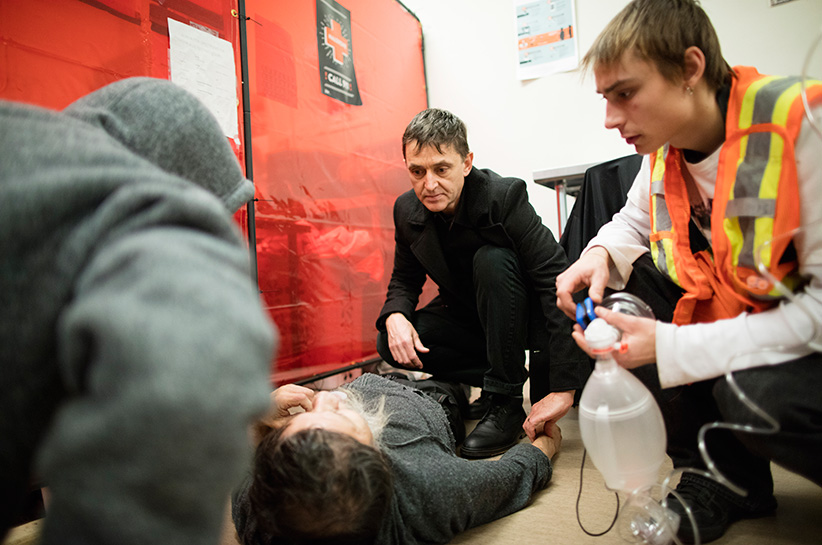 It took a long time for Dr. Mark Tyndall to decide that the best way to do his job would be to ensure Vancouverites could get hard drugs from automated vending machines.

Tyndall, 58, is the director of the British Columbia Centre for Disease Control. He’s been working with addicts for decades, helping them stay alive, helping them manage their addictions, helping those who think they might be ready—and on most days, that’s not a lot—try to get off drugs.

But lately he has grown weary of watching people die. Last year, overdoses killed 1,422 people in British Columbia, the highest number ever, a 43 per cent increase over 2016. It’s time for something radical, Tyndall thinks. “We need to offer people the opportunity to get drugs that won’t kill them,” he says.

And not a few people. More like hundreds or thousands. So sometime in the next several weeks, in March or April, Tyndall will launch a pilot program to distribute hydromorphone pills (a pharmaceutical narcotic derived from morphine) to registered users, using vending machines that read the distinctive blood-vessel patterns in a user’s finger to ensure they’re going to the right addict.

MORE: Facing the opioid crisis, an establishment doctor heads to the streets

The machines are distributed by Dispension Industries, a company in Halifax that gets them from American Green, a company in North Carolina. Perhaps not surprisingly, given the name of the U.S. company, the machines were originally designed to distribute cannabis, but rejigging them to dispense hydromorphone pills is easy enough.

“The media’s kind of run with this idea of vending machines,” Tyndall said ruefully. “It’s given a lot of people the idea that we’re going to put them in shopping malls, give them to children.” That is not the case. “It’s really more of an ATM than a vending machine. This is like a big metal box made of steel that can’t be taken anywhere. Biometrics [the blood-vessel-scanning technology] for access. It’ll tightly control how many pills you get out of it.” Tyndall is considering calling the gadgets “dispensing machines” rather than “vending machines,” in hopes of freaking out fewer people.

Vancouver’s Downtown Eastside, defined as a de facto colony for people who inject or smoke hard drugs, is smaller than it used to be—maybe half the 20 blocks it used to cover, with condo developments looming on all sides. On the warm January day when I visited, a lot of people are out, lining the sidewalks of East Hastings Street, a few side streets and many wide alleys off the main artery. Many are openly smoking or injecting drugs. It’s a shocking sight the first time you visit. You get used to it pretty quickly. 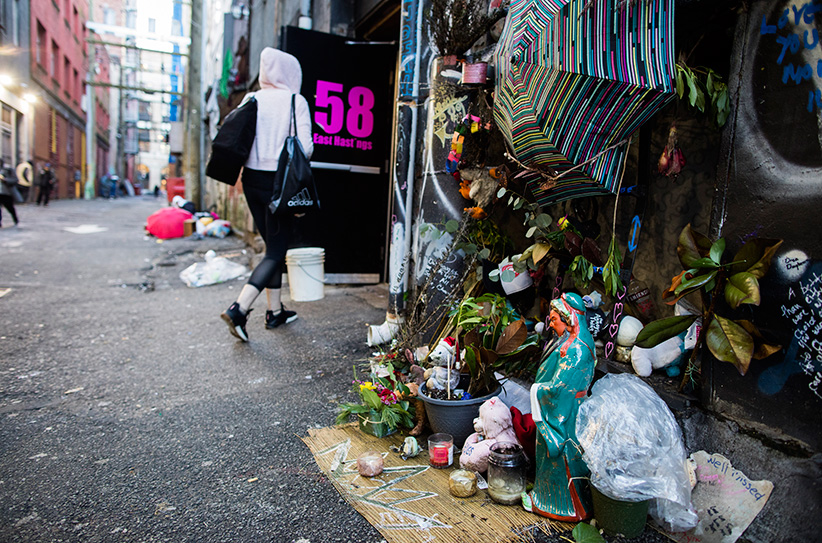 A user walks past a memorial as she arrives at Overdose Prevention Society safe-injection site in the Downtown Eastside, Vancouver, British Columbia, Monday, January 15, 2018. (Photograph by Rafal Gerszak)

One of the striking aspects of life in the Downtown Eastside is that because so many of its residents and social services have had so much practice, it is actually one of the safest places in Canada to have a drug overdose. The Insite supervised-consumption site has been open in the neighbourhood for more than a decade, Tyndall tells me in a café in the neighbourhood. Several less elaborate overdose-prevention sites, where users can take drugs at long tables and volunteers administer first aid if something goes awry, have opened more recently.

“There’s rapid access to methadone and suboxone,” used in treating narcotic addiction, Tyndall says. “A lot of people carry naloxone all over the place.” Naloxone blocks the effect of opioids, especially during an overdose. People here clip the little kits to their backpacks and take them everywhere. “There’s quite a bit of supportive housing. There are outreach nurses.”

The upshot is that if you’re using opioids in the Downtown Eastside and something goes wrong, you’re probably much closer to someone who can keep you from dying than you would be in most other places. Vancouver’s fire department reports that while one person dies for every 17 calls to the city’s 911 emergency line—and in South Vancouver it’s as high as one in five—in the Downtown Eastside, only one in 24 calls leads to a fatality.

But even when it’s survivable, an overdose is a harrowing experience with unpredictable outcomes. This point was driven home when I saw a man collapse from an overdose in front of me. Tyndall had taken me to visit one of the Overdose Prevention Society sites run by Sarah Blyth, a community organizer. Strictly speaking, the place operates outside the law. In reality, the police never bother it.

Tyndall hopes to put one of his dispensing machines in the back of Blyth’s centre this spring. Blyth was explaining the centre’s functioning to me when there was a thump at the plastic partition behind her. A man in his 50s using heroin at the end of one of the long steel tables had passed out and hit the partition on his way to the floor.

Volunteers at the centre, themselves addicts in most cases—they’re called peers, and they’re highly valued in places like this because addicts know how to spot an addict in distress—crouched over the man, whose name was Allan, and tried to coax him back to consciousness. No dice. He wasn’t breathing.

One volunteer called 911 while two more gave Allan oxygen and an injection of naloxone. By the time the ambulance attendants arrived, minutes later, Allan was awake and sitting upright on the floor. The attendants quizzed the volunteers about his treatment. “All right, good work,” one said after the briefing. They chatted with Allan briefly and left. He stayed sitting on the floor. They could have taken Allan to a hospital, Tyndall told me, but doctors could not have done more for him than Allan’s peers had done on-site, and he would have had to walk back to the Downtown Eastside. Most of the neighbourhood’s residents prefer to avoid the walk.

If Allan had been alone at home, an overdose of the kind I watched might have killed him or it might have spared him. It’s hard to guess. What’s known is that 90 per cent of overdose deaths in B.C. happen to people who are home alone. But Allan was at what everyone in the Downtown Eastside calls Sarah’s Place, so half an hour after he overdosed, he picked himself up and walked home.

This was a catastrophe averted. But it’s hardly the best outcome. Tyndall says the Downtown Eastside is full of catastrophes averted, but it’s sorely in need of better outcomes.

“I can take you by the Crosstown clinic, which sees about 140 people every day for hydromorphone and heroin injections,” he says. Crosstown is the only place in Canada authorized by Health Canada to distribute free drugs to addicts. “The model’s been going on a long time. It’s very intensive and very expensive. And not really scalable.”

It’s also not the kind of life most users can accommodate. “Even if money was no object, most people don’t want to go into a medical establishment three times a day. The protocol is, you have to stay there for 45 minutes after injection. So that’s basically your whole life. It’s three times a day, and most people don’t travel far from the clinic. So they just mill around outside. So it’s just not practical for most people to do that.”

Tyndall’s plan is for the hydromorphone to be distributed to far more people with far less supervision. He has a $1.4-million, three-year Health Canada grant to test his machines. He doesn’t have final authorization to proceed, though he is talking to Health Canada officials nearly daily. That he has gotten this far is remarkable, because two successive federal Liberal health ministers, Jane Philpott and Ginette Petitpas Taylor, have said they wouldn’t contemplate expanding access to doctor-distributed drugs for addicts. That Ottawa is wavering on that line is a measure of the desperation the opioid crisis is causing.

Tyndall’s pilot project will distribute pills three times a day to between 200 and 300 carefully selected people. “If it worked, we could put these machines out quite quickly and scale it up.” He is aware the whole notion freaks people out.

Every time I write about opioids, I tell Tyndall, I hear from readers who say, “We went from giving addicts a place where they can safely use the drug, to just giving them the drug. We’re making it so easy for them. No wonder overdoses are skyrocketing. It’s paradise for drug users.”

Tyndall’s response: “That’s why people need to go to one person, meet one person [who uses opioids daily]. Tell me they’re living in paradise. I mean, it makes absolutely no sense. The people down here have gone through more hell than any of us could ever imagine.”

Addiction, he says, is a chronic relapsing disease. Most addicts don’t stop. Prohibition forces them to spend their day committing petty theft or prostitution or whatever else they need to do to pay for their next fix. And even then they don’t know whether their next fix will contain enough badly mixed carfentanyl to kill them. “You can’t ask people to recover if they’re dead. But the stigma goes so deep that I think a lot of people go, ‘Well, who gives a shit? They die. Better for us. We don’t have to pay their medical bills.’ ”

How can a medical doctor distribute clean drugs to addicts? To Tyndall, the question is why he wouldn’t, knowing that he is able to. “It’s not good enough for me to say, ‘Sorry, I have the drugs here that you need, but I’m not going to be able to prescribe them to you. You’ll have to go and find your own.’ I now have a lot of ethical problems with that.”