How #stormchips became a Maritime phenomenon

A Q&A with Stephanie Domet, who accidentally started a uniquely Maritime tradition of celebrating storm-ration snacks 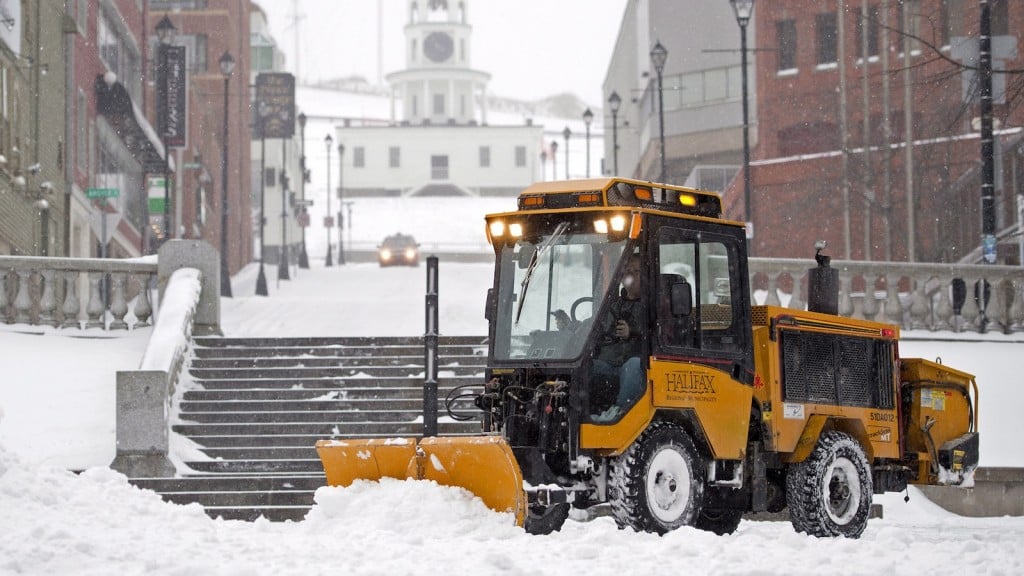 A plow clears the Grand Parade as a major winter storm hits Halifax on Tuesday, Jan. 27, 2015. Transportation has been interrupted and some schools, businesses and government offices have been closed. (Andrew Vaughan/The Canadian Press)

UPDATE (Nov. 17, 2015): New Brunswick snack-maker Covered Bridge now offers ‘Storm chips’ as a flavour that can be purchased on shelves.

New York may not have been slammed by snow as predicted, but the eastern seaboard, including the Maritimes, was hit by heavy gusts, and more than 30 cm of snow in some areas. For Atlantic Canada, though, these tough wintry times have only one balm: #stormchips, a year-old hashtag for Haligonians to fete the snacks they’ve stocked up on. As Tuesday’s storm approached, the tag began to trend nationally yet again, and East Coast businesses and political parties took up the stormchip cause. It all started with Stephanie Domet, who hosts the Mainstreet Halifax program at CBC Radio One. Domet spoke to Maclean’s about how it all started, her personal #stormchip rules, why stormchips feel quintessentially Maritime, and what it’s like to have all this (strange) power.

Q: So how did it begin?
A: We here in Nova Scotia went through quite a period last year of winter storms all the time, it felt like, for weeks and weeks and weeks. And it seemed like, last January, that every time the forecast was for stormy weather, I got the urge to get chips. I love chips. My total kryptonite is plain ripple chips—but we never have them in the house, probably because I love them too much. So they’re a super treat-thing for me, and I realized that every time there was a storm I got this incredible urge to get chips. So this one morning I go to my husband and say, “It’s going to really snow tomorrow, we should get some chips tonight.” And then in an off-the-cuff conversation, live conversation on the show that I host, I was talking with our news reader Ryan Pierce and he talked about the storm, and I said that the only thing on my grocery list to stock up for the storm is chips and dip, and he admitted that it was a similar conversation they were having at his place, what snacks to get before the storm. Maybe we talked about it a little more on the show before we were off air, and then I went to the grocery store and I got my ripple chips and dip, and took a photo of it, and tweeted, “Success! #stormchips.” The rest, as they say, is history, I guess. (Laughs)

Q: So why do you think this blew up? There’s a feeling, for me, that the #stormchips phenomenon is kind of this essentially Maritimey thing.
A: The only thing I can think about it was that this was a thing that everyone was always doing, and that I just happened to tap into the zeitgeist and that’s why it resonated. I don’t know if it’s a particularly Maritimey thing. Maybe we take storms more seriously here because of the ocean? I don’t know!

Q: To me, it feels like it’s this thing that could only happen in the Maritimes, or in Halifax—something that this smaller community really took to and made their own. That it’s this silly, not-self-serious thing that Halifax—and it’s spread to P.E.I. and New Brunswick, too—took strongly to.
A: One thing I’ve really noticed especially about Halifax Twitter, if there is such a thing, is that it’s really fun. And maybe because this is a smaller place, and you don’t know everybody of course—of course you don’t, it’s still a city, but you do at least feel a passing familiarity with many people, even if you don’t know them. And things like this happen fast, on Twitter, as they do everywhere, but it seems to me that maybe the relationships are stronger or understood—we all live here, we’re all in it together, we’re all getting our stormchips.

Q: And that maybe it couldn’t happen in a more diffuse community, like in Toronto.
A: My experience living in Toronto, which I did for many years before I moved here—I grew up in Ontario—was that Toronto was more like a series of small towns, and you never looked  anybody in the eye or said anything them on the street or the streetcar because they’d wonder what you wanted from them, and that’s just not the way it is in Halifax. So maybe that’s it: this feeling of “we’re all in this storm together, this is a thing we all do, people put a name to it, and we’re all super happy to be talking about it.”

But listen, I don’t have any answers—I’m as baffled as the next guy about how this became such a thing.

Q: Right—you’re a two-time author, the host of a popular radio show, and also—
A: — best known as the inventor of #stormchips. (Laughs)

Q: Right?!
A: It’s confusing to me. In my Twitter bio I say I’m the half-proud originator of #stormchips. I mean, if you have only 15 minutes of fame, this is not what I was planning on spending mine on, but I guess you don’t get to choose. I mean, I’m delighted that so many people get so much joy from it. It is by far the most popular thing I’ve ever written, and the thing into which I’ve put the least amount of effort, so I don’t know what I should take from that as I get to work on my third novel. (Laughs)

Q: Why only half-proud?
A: It’s been trending nationally for 24 hours. And it’s about chips. You know what I mean? (Laughs.) Also, I guess for someone who hosts a radio show, I’m very shy, and so it always feels weird to get a lot of attention, and once a thing gets onto the Internet there’s nothing you can really do about it, so that gives me a kind of squirmy feeling inside.

Q: But you’ve seen the tweets: the political parties making #stormchips references, the hotels putting out #stormchips deals.
A: I guess it is. I mean, I think the power is in the hashtag, I don’t think it has anything to do with me, but maybe that’s a typically a CanLit thing to feel. Like I feel the same way as my books, that they don’t really have anything to do with me ultimately, they just go out into the world and make their own way, and there’s the little hashtag doing the same thing. A lot people have told me that they bought chips they would have never otherwise bought so … that’s a power. (Laughs)

Every time there’s inclement weather here, people tweet me asking if it’s bad enough to get stormchips. I mean, I don’t want to be the arbiter of what you eat, but I will say that my personal policy on stormchips is that they’re just for emergencies. They’re just a thing that doesn’t need to be refrigerated or opened with a can opener and heated. So you can always eat your stormchips, which you’re going to do even before it snows if you have them in the house, let’s be honest.

So Haligonians have their #stormchips and New Yorkers have #stormkale I’m not sure what this means. http://t.co/RIeNlGRA2I

Q: In New York, of course, there was a kale run, as if rivalling stormchips.
A: I’m sure my trainer had wished that I had made #stormkalechips a thing. I could’ve wrapped up this non-blizzard of 2015!

Q: Did you manage to get your chips and dip?
A: I did not personally get my chips and dip this time, because I’m on this stupid challenge at my gym. So I’m on my way home to make kale chips.

Q: Hey, see? You tied up the whole blizzard.
A: We’ve come full circle. (Laughs) I can’t believe we’re talking about this.