How to react in the event of a bomb threat

Jewish centres across North America have received more than 100 bomb threats. An explosives expert explains why preparedness is vital. 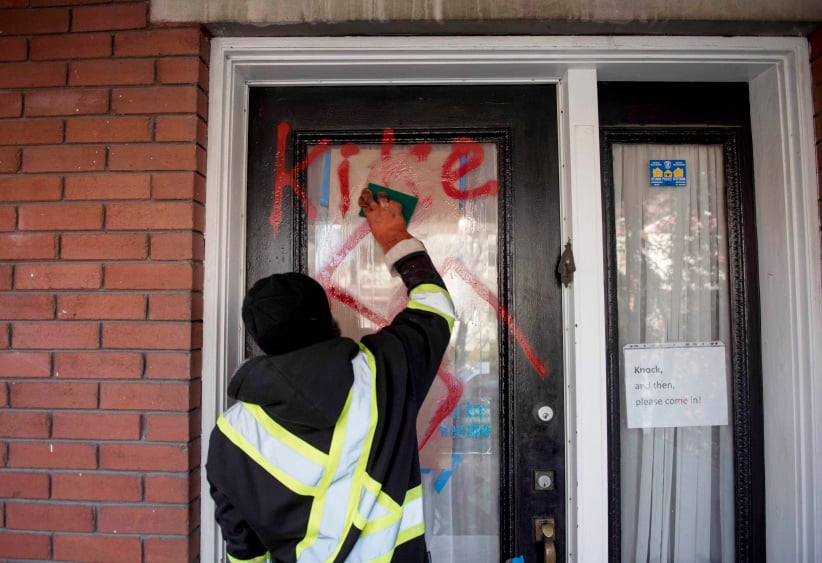 A graffiti removal worker cleans anti-Semitic graffiti, including a swastika, that was spray painted on the door of The Glebe Minyan and home of Rabbi Anna Maranta on Tuesday, Nov. 15, 2016 in Ottawa. (Justin Tang/CP)

A dreaded sense of “when, not if” is spreading throughout Jewish organizations in North America, as another wave of bomb threats hit Jewish Community Centres on Tuesday: Maryland, Wisconsin, Alabama, Florida, Oregon, New York, and two in Ontario — London and the Miles Nadal JCC in downtown Toronto. This wasn’t the first time a Canadian facility was among the targets, with a phoned-in threat last week forcing the evacuation of the Calgary JCC. Another threat on Tuesday was aimed at the Chicago Jewish Day School.

The threats have been coming, often in clusters, for much of 2017. None of the threats thus far have been founded, but authorities haven’t taken chances as new robocalls or emails come in, warning of destruction. Jewish cemeteries have also been vandalized, Jewish groups have urged both calm and vigilance. All 100 U.S. senators, meanwhile, have crossed party lines to urge “swift action” by Trump administration officials who lead the FBI, Justice and Homeland Security departments.

The trend has reportedly triggered copycats already. The one person arrested thus far is a former journalist also charged with cyberstalking and harassing a woman, but he’s only alleged to be behind a handful of the more than 100 threats sent to Jewish centres.

Although the recent frequency is jarring, Canadian Jewish community centres and synagogues have faced bomb threats and other security risks long before this year. Six months ago, it was schools in multiple provinces that faced a string of similar bomb threats. Some administrators ordered evacuations, but not all.

Juri Kasemets is a Halifax-based explosives expert and instructor who leads courses in handling bomb threats at “soft target” buildings, such as malls, schools, places of worship and public institutions. To him, preparedness is vital; and that’s maybe the only clear answer when dealing with bomb scares.

A: Everything these days is based on risk assessment. Risk equals probability times consequences. The probability may be low but the consequences are so high that the risk needs to be considered as high.

Q: A public facility gets a phone call in the morning that there is a bomb somewhere in the building. What are the next steps the facility should take?

A: People answering phones at an organization should have access to a checklist. The person receiving the threat should be given time to complete filling out the checklist, the evaluation team gathers in the emergency operations centre to evaluate the threat. What’s the threat level? Should you search? Evacuate [immediately] or when something suspicious is found? Partial or complete evacuation? Covert or overt evacuation or search?  They need to be discussed, but discussed quickly.

A: Whether to evacuate or not is one of the most difficult questions. Evacuation is not necessarily your first option, but it depends on your risk tolerance. If a threat is ignored could there be morale problems—certainly legal problems if there is an explosion. Even good decisions can have bad outcomes.

Q: As the public sees threats and evacuations proliferate, and all of them thus far unfounded threats, what risk is there of individuals letting their guard down?

A: In my experience, guards may be up for a short period after an actual bombing but those guards don’t stay up for long (if they even went up).

Q: How likely are actual bombs or violent incidents to accompany bomb threats — or do attackers tend not to communicate threats before attacking?

There is a saying: bombers don’t threaten and threateners don’t bomb. But this isn’t 100 per cent.

Now, here is the guidance offered by Public Safety Canada in the event of a bomb threat, from its Get Prepared website:

If you receive a bomb threat, stay calm and try to get as much information as possible. Although this might be difficult, try to note any unique features about the voice and any background sounds you hear over the telephone. Keep the caller on the line as long as possible and take detailed notes about what is said.

Try to note the following:

Call the police and building management immediately after you hang up.