Huawei CFO Meng Wanzhou's arrest: What you need to know

Meng was arrested on Dec. 1 in response to an extradition request from the U.S. Here's everything that has happened since. 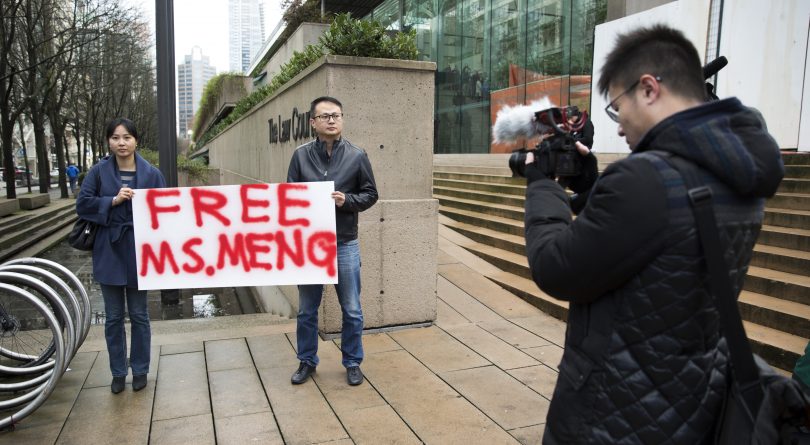 Ada Yu of Vancouver (left) and a man who wished to remain unidentified hold a sign in favour of the release of Huawei Technologies Chief Financial Officer Meng Wanzhou outside her bail hearing in Vancouver on Dec. 10, 2018. (JASON REDMOND/AFP/Getty Images)

Meng Wanzhou figured it’d be a 12-hour layover at the Vancouver International Airport.

Instead, when the Huawei CFO touched down on Dec. 1, it set off a hugely complicated entanglement of diplomacy, international trade and human rights.

The high-profile Meng was arrested by Canadian authorities—at the request of American authorities for violating sanctions on Iran. Extradition to the U.S. is still pending—Uncle Sam has until Jan. 9 to file the official paperwork. Meanwhile, China has threatened Canada with “grave consequences” in retaliation for the arrest.

On Tuesday, after three days of hearings, the B.C. Supreme Court granted Meng bail, with conditions that include a $10 million surety (including $7 million in cash). Then Donald Trump talked about getting himself involved.

Here’s what we know so far:

The latest: Trump talks about intervening

The court system is meant to be free of political influence. But Trump is a fan of the Art of the Deal.

In an interview with Reuters, Trump expressed a willingness to intervene in the Justice Department’s case against Meng, using her as a bargaining chip in the U.S. government’s efforts to secure a better trade deal with China. “If I think it’s good for what will be certainly the largest trade deal ever made—which is a very important thing—what’s good for national security – I would certainly intervene if I thought it was necessary,” Trump said. “Whatever’s good for this country, I would do.”

If Canada executed this arrest out of respect for the rule of law, now might be a good time to let her go. Because the rule of law just got cancelled by the President.

In response to Trump’s comments, Prime Minister Justin Trudeau said “Regardless of what goes on in other countries, Canada is—and will always remain—a country of the rule of law.”

What are Meng’s bail conditions?

Meng won’t be going out late at night anytime soon—if she abides by her bail conditions, that is. Among the more than dozen conditions set by the judge, including a $10 million surety, Meng must stay indoors from 11 p.m. to 6 a.m. Meng must remain within the Vancouver region (but away from the airport in Richmond), surrender her passports, wear an ankle bracelet monitor for GPS tracking, as well as obey security detail that follows her whenever she leaves one of her multi-million dollar Vancouver homes where she must reside in the interim—all at her own expense.

The judge also ruled she must keep the peace.

Huawei Technologies Co. is a private Chinese company that makes and sells smartphones and other telecommunications equipment globally. Based in Shenzhen, the company made headlines this year for becoming the second-largest smartphone maker in the world, just behind Samsung and beating Apple, now in third place. The company sold 54.2 million smartphone units in the second quarter of 2017, a 40 per cent year-over-year growth. By comparison, Apple sold 41.3 million phones in that time, growing just 0.7 per cent year over year.

Huawei’s massive growth has come with a few setbacks. Several countries (including the U.S.) are banning the company’s products from rolling out on future 5G networks, citing security concerns. The U.S. government has gone so far as to warn its allies to avoid using Huawei phones and equipment due to a possible security threat. Though Huawei is a private company, many are worried that it could be working with the Chinese government to essentially spy on its users.

Who is Meng Wanzhou?

Meng Wanzhou, 46, is Huawei’s chief financial officer (CFO). She’s also the eldest daughter of the company’s founder, Ren Zhangfei. Meng, (who also goes by the name Sabrina) started at Huawei as a receptionist in 1993 soon after graduating from college. A few years later, she went back to school and received her masters in accounting and came back to Huawei to join the accounting department. She held various positions within the accounting and finance departments at Huawei before becoming the company’s CFO around 2011.

She’s married to a venture capitalist named Xiaozong Liu. Together, they have one daughter and Meng has another three sons from previous marriages. Meng is said to live in Shenzhen, China, where Huawei is based, but records show that she was once a permanent resident in Canada (though she renounced her PR status around 10 years ago). Now, it seems she spends several weeks—and sometimes months— in Canada during the summer. Meng owns two multi-million dollar homes in Vancouver with her husband. Court documents have revealed other personal details about Meng, including health problems she suffers from, like hypertension and sleep apnea. Her lawyers are arguing that she should be released on bail to ensure her conditions don’t worsen, though the Crown is arguing she’s a flight risk; if she goes back to China, she could avoid extradition to the U.S.

How is Meng allegedly in breach of U.S. sanctions on Iran?

Back in 2008, Meng was on the board of directors for a Hong Kong-based company called Skycom, according to a Reuters report. Fast forward to 2010 and Skycom tried to sell about $2 million worth of Hewlett-Packard computer equipment to a company in Iran—which was in breach U.S. sanctions.

Meng’s lawyers said Huawei had divested itself of Skycom by then—and yet, according to the 2013 Reuters report, more than a dozen pages on the Skycom proposal for the Iran sale carried either the Huawei logo or “Huawei confidential” marked on them.

The Americans accuse Huawei of utilizing Skycom as an Iran-based affiliate, and Canadian prosecutors said Meng lied about the links between the two companies, a charge Huawei has previously denied.

What does Canada have to do with all this?

The Americans wanted Meng arrested and their best chance to make that happen was when she landed in Canada, given the extradition treaty both countries have. The U.S. had actually wanted to arrest Meng for months, according to CNN, but couldn’t make that happen on U.S. soil, as she never travelled to America. Instead, on two days’ notice, they spotted their chance during her planned layover in Vancouver—coincidentally the same day Trump met with Chinese President Xi Jinping to call a truce over their trade war.

Will Canada face any blowback from China?

No one has stated why, exactly, Canadian ex-diplomat Michael Kovrig was detained in China earlier this week. At least not yet.

“International Crisis Group is aware of reports that its North East Asia Senior Adviser, Michael Kovrig, has been detained in China,” his current employer wrote in a statement on its website. “Since February 2017, Michael has been a full-time expert for Crisis Group. We are doing everything possible to secure additional information on Michael’s whereabouts as well as his prompt and safe release.”

The timing of Kovrig’s disappearance is suspicious to say the least, given a Canadian court is currently weighing whether not to grant bail to Meng. Tit-for-tat? Such tactics certainly wouldn’t be unheard of from China. Not to mention China’s foreign minister told state media Canada could face “grave consequences” for not releasing Meng.

Then there’s the Chinese public trying to bully Canada in the marketplace, specifically targeting the Canadian luxury brand Canada Goose. Since Meng’s arrest, Canada Goose’s stock has tumbled 20 per cent, as locals on the social media platform Weibo have called for a boycott of the luxury Arctic-wear outfitter. Meanwhile, China’s own largest down clothing outfitter, Bosideng, saw its stock spike to a five-year high.

The cold shoulder couldn’t come at a worse time for Canada Goose, who just this spring announced a long-term growth strategy in China that would include opening to retail stores (one in Hong Kong and the other in Beijing), in addition to a regional head office in Shanghai.

What was at stake at the bail hearings?

Lawyers spent three days in a Vancouver courtroom arguing about the risk of the Huawei executive leaving Vancouver if she were to be granted bail. Meng’s legal team produced several potential guarantors who would ensure she remained in B.C.—including, according to a CBC News report, “a realtor, an insurance agent, a part-time yoga instructor and homemaker whose husband once worked with [Meng’s husband, Xiaozong] Liu.”

Meng’s lawyer, David Martin, denied the Crown’s claim that his client posed a legitimate flight risk, and championed the idea of electronic monitoring—including a body-tracking device and a private security team that, at Meng’s expense, would ensure she stayed put.

Does any of this have to do with 5G technology?

It could. Uncle Sam is very skeptical of Huawei’s technology.

The heads of the CIA, FBI and NSA—among other intelligence officials—told the U.S. Senate Intelligence Committee earlier this year to caution American citizens from using smartphones made by either Huawei or fellow Chinese telecommunications company ZTE for fear of the “capacity to conduct undetected espionage.” Shops on U.S military bases were banned from selling smartphones from those two companies, at the direction of the Pentagon.

Former prime minister Stephen Harper has equally called for a ban on Huawei from 5G networks in Canada—a position already taken up by Australia, New Zealand and the U.S.

In Canada, Huawei has partnered with Telus to test 5G technologies, according to the Logic—and the Chinese telecom is the presenting sponsor of Hockey Night in Canada, the rights to which are owned by Rogers (the parent company of Maclean’s).

Ian McLeod, a spokesman for Canada’s Department of Justice, told the Globe and Mail Meng was “sought for extradition by the United States.” On Dec. 10, Prime Minister Justin Trudeau told reporters the decision to arrest Meng was free of political influence. “The appropriate authorities took the decisions in this case … We were advised by them with a few days notice that this was in the works, but of course, there was no engagement or involvement at the political level in this decision because we respect the independence of our judicial processes.”

What is Washington D.C. saying?

In the New York Times, Republican Senator Ben Sasse, who sits on the armed services committee, accused Huawei of “working to creatively undermine” American national security. He added: “Americans are grateful that our Canadian partners have arrested the chief financial officer of a giant Chinese telecom company for breaking U.S. sanctions against Iran.”

Reuters reported U.S. Donald Trump was unaware the U.S. Department of Justice had requested Meng’s exradition. On Dec. 6, National Security Advisor John Bolton told NPR he knew about the request in advance of Meng’s arrest. But he added on “these kinds of things,” the staff around Trump “certainly don’t inform the president on every one of them.”

On Dec. 8, a statement from the Chinese foreign ministry announced vice-foreign minister Le Yucheng had “urgently summoned” John McCallum, Canada’s ambassador to China, to lodge “strong protests” of Meng’s detention. Le called Meng’s arrest “unreasonable, unconscionable, and extremely vile in nature,” and threatened “grave consequences,” for which the Canadian side “will have to bear the full responsibility.”

The state-owned Xinhua News Agency joined the united Chinese front on Dec. 9, penning an editorial that called for Meng’s release—and claimed Canada “chose to ignore the international rules and obey the United States, paying the bill for America’s bullying actions.” It went on: “Canada’s misdeeds, which are lawless, unreasonable and callous, have caused serious damage to its relations with China…and hurt the Chinese people’s feelings.”

On Dec. 10, a spokesman for the Chinese foreign ministry said any retaliation “totally depends on the Canadian side itself.”