Should judges let the media be the gauge of outrage? 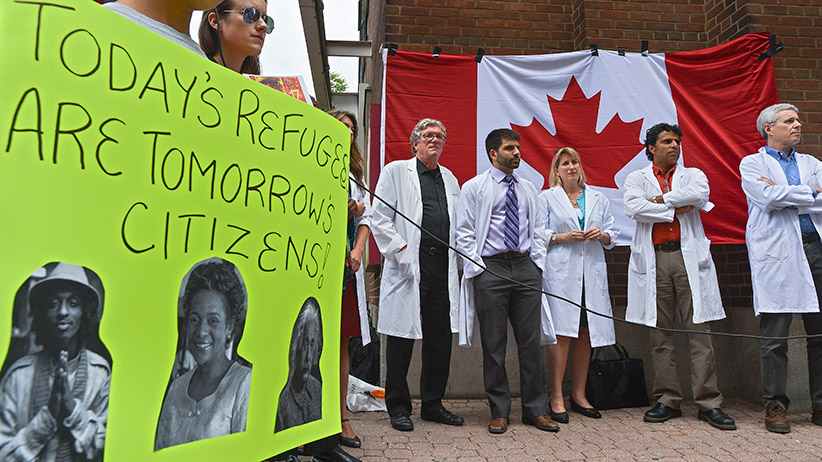 Pundits like me spend a lot of time feeling powerless. When a cabinetmaker or a farmer concludes his workday, he has got something of value he can literally point to. What does a columnist have? To use our own commonplace terminology: fish wrap—a printed object whose value deteriorates with each passing hour.

But the Federal Court of Canada has given us a miracle, an unexpected proof of our power. Hon. Justice Anne Mactavish, you may have heard, issued a ruling July 4 that reversed Conservative cuts made in 2012 to the Interim Federal Health Program (IFHP) for refugees and refugee claimants. She found, making pioneering use of Section 12 of the Charter of Rights, that the cuts resulted in “cruel and unusual treatment” for claimants who lost insurance privileges they would once have enjoyed.

As Justice Mactavish concedes, deprecating the removal of a welfare entitlement as “cruel and unusual treatment” is a fairly radical legal novelty. And a separate issue is the way in which “cruel and unusual” is defined. This phrase is of great antiquity in the Anglo-Saxon tradition and is no longer held to mean only what its component words betoken.

There is a multi-part test for establishing “cruel and unusual” behaviour. Among the questions are: Is the treatment “unacceptable to a large segment of the population”? Does it “shock the general conscience”?

Well, a judge can’t go out and hire Ipsos Reid to whip up a poll. So Mactavish looked at—newspapers and magazines! Humble organs of opinion! She noted that there were three groups of people who were clearly horrified by the IFHP cuts: doctors, who gave dissatisfied statements to the press; provincial politicians, whose luminous anger was conveyed through that same press; and editorialists and columnists, whose collective indignation, plopped on a page in haste, was compiled into a “compendium” for her perusal.

When is the last time anyone asked a cabinetmaker or a farmer to speak for the “general conscience”? It seems journalists can make law—can even, acting through an appellate judge, supersede law as made by so-called legislators.

This is pleasing to the ego, yet I am not as confident as Justice Mactavish that the Conservative cuts to the old refugee health arrangements are shocking to Canadians. One obvious problem with using pundits as an index of conscience is that people who are angry about something will write about it, and people who aren’t, won’t.

The old IFHP provided not only the health care ordinarily given free to citizens by the provinces, but also extra entitlements working Canadians typically devote part of their paycheques to, including drug coverage, vision care, dentistry and contraception. Refugee claimants typically became eligible for IFHP immediately upon setting foot in the country—and remained eligible until they were removed from Canada, even if their refugee claims failed.

In her decision, Justice Mactavish works hard to convince us that this situation was not unfair to Canadian citizens. She shrugs off the idea that Canadians’ obligations to low-income fellow citizens might be different from their duties to foreign visitors whose formal claims to refugee assistance have failed. But the Conservatives certainly seem to have thought there was some ethical anomaly worth exploiting. In 2012, they took “non-essential” items like annual checkups away from successful refugees, and stripped nearly everything short of treatment for dangerous infectious diseases from the unsuccessful ones.

The Conservatives admitted that one purpose of this establishment of care tiers was to dissuade refugee claims. One of the individual applicants in the lawsuit is a diabetic Afghan gentleman whose refugee claim was rejected. Canada is too merciful to forcibly return him to a dangerous homeland, and in the meantime he does not earn enough to afford insulin. The other individual is another failed claimant from Colombia: he is in Canada lawfully because his wife’s claim succeeded, but his own failed claim, thanks to a donkey-like application of principles, rendered him ineligible for an urgent eye surgery.

These are hard cases that could have been rectified by means of modest tweaks. Justice Mactavish instead threw out the whole 2012 IFHP revision, citing a further panoply of ill-documented or downright hypothetical cases in which the effects of the revised IFHP might also be “cruel and unusual.”

This procedure has met with near-universal approval from journalists. We, after all, sort of helped write the ruling. But what if the Conservatives run against it in 2015, challenging the media’s reading of the nation’s “general conscience”. . . and they win? Should we really be so sure we speak for you?