In a load of clean clothes, a small act of faith - Macleans.ca 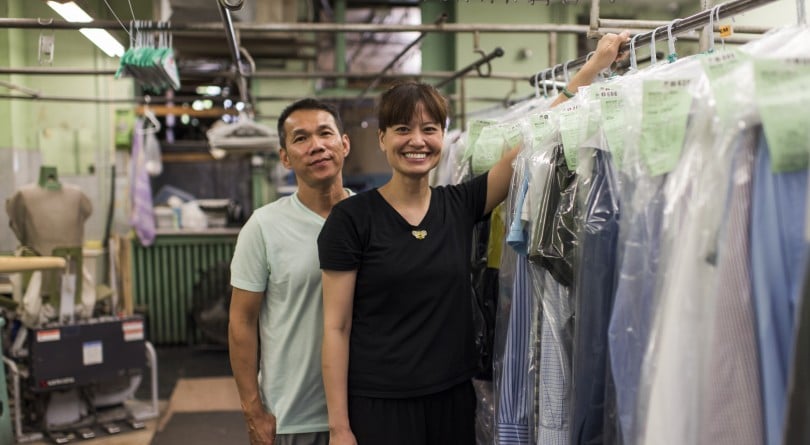 Joe (left) and Fo Nguyen, owners of Marathon Cleaners, pose for a photo at their location in Toronto on Friday, July 13, 2018. (Photograph by Marta Iwanek)

It’s been a hot summer, and the world, it felt, was only getting hotter.

Geopolitical crises, climate change, brazen violence, and threats to the rights of vulnerable people have levied anxiety to the average follower of news. Most recently, the Trump Administration’s policy of separating migrant children from their parents stirred outrage—like so many things that this White House has done—but the reaction felt even more piqued: A TV news anchor wept on air; another reporter practically begged White House press secretary Sarah Huckabee Sanders to remember that she, too, was a mother. Things can feel particularly desperate.

Through this all, though, the quotidian errands of a quotidian life still need to be done—groceries, perhaps, or a haircut, or some dry-cleaning.

But in front of a dry-cleaners near Toronto’s Oakwood Village, a multicultural area just west of the subway line, a simple sign in the window makes the routine feel a bit more remarkable. “If you are unemployed and need an outfit clean for an interview, we will clean it for free,” it said. Somehow, in all this heat, this simple promise of a good turn felt like a glass of ice water.

Since 2015, Marathon Cleaners has been owned by a married couple, Fo Pham and Joe Nguyen, both immigrants from Vietnam. They work 12-hour days, six days a week, and when we came to talk to them about the story of their sign—late in the day, when the walk-ins were few—Fo took us to the back. Her husband continued working, further back, beyond the racks and garment conveyor. Dry-cleaners are always warm places, but especially so this day. Joe came forward briefly to say hello, bringing us each a can of iced tea. There is evidence of industry everywhere, but no chaos or clutter; Fo is, after all, particular about the way things look.

“My first name is actually ‘P-h-o,’ ” she tells us, “but I don’t spell it that way here, because people think of the food. And I don’t like that.” She shakes her head slightly and smiles, looking impossibly elegant in the heat. Fo and Joe knew each other in Vietnam, but only married after they arrived in Canada, in the 1990s, several years apart.

An incongruous family picture hangs on the wall over Fo’s sewing machine; while Fo and Joe have two children, the photo, bright with saris, is actually of the family who used to run the business, and who still own the building. They come in every month to say hello, having shown Fo and Joe the ropes and introduced them to all the customers when the shop changed hands.

“It was my idea,” Fo says about the sign in the front. Back in her days working at a dry-cleaners in Montreal, she’d had a friend, originally from China, who was out of work. This friend was a capable woman, but poor, and she struggled to find a job.

Sometimes, she would ask Fo if anyone had left a nice garment behind—something she could borrow, so she’d look professional for interviews. “You have to look nice,” Fo explains. “It says, ‘I respect you.’ ” She lent her own clothes instead, and after a few outfit changes, her friend found work.

That was the inspiration—that, and the country itself.

She explains that both her parents had been teachers in Vietnam, but they required help learning English and finding new, different employment when they arrived here. Canadians provided assistance with both of these things. “We want to give something back to Canada,” she says.

A few people have taken them up on the offer, and yes, of course, someone could take advantage—that had been Joe’s concern, at first. That, or people would think they were ostentatious. But Fo felt they could strike a balance. “It would just be a little thing we did,” she says. They made the sign visible, but not too big. A little sign for a little thing.

She remembers one man who came in for the free service—and then came a second time, needing another clean set of clothes. When he came a third time, she was a little nervous. “Again?” she said to him, but it turned out he’d just come to tell her he’d gotten a job, and to say thank you. He was unlikely to come back, he said, since he lived nowhere near here; he said he’d come all the way from Ajax, about 45 minutes away, just for this offer. But he wanted her to know what it meant to him.

Fo is vibrant as she tells this story. Her point is that the offer has power—that it makes people want to do good. They don’t want to abuse it. They want to support it. She has another story about a customer who came in with a light load of laundry, just a few dollars’ worth, then saw the sign and returned with twenty bucks for the till. “The next time you help someone,” he said, “think of me.”

It feels like Fo and Joe helped that man, too. He may not have needed a job—but perhaps he needed to do some good, and their offer was an opportunity.

Social media often scales up our sense of community, and with that, our sense of the community’s suffering, so it can feel like little headway is actually being made. The bad news is big, after all, and the good news is often small. The bad news affects thousands or even millions of people; the good, just a few. Possibly what makes Fo and Joe’s sign such a hopeful symbol is that it challenges this kind of thinking. It reminds us that small solutions need not remain small—that an act of generosity provides fertile ground for more such acts. It asks, “What can I do?” with no hint of despair—like an act of faith.

Both Fo and Joe are Roman Catholics, and they see their offer, in one sense, as their own faith made visible. But anyone can do what they do, they insist. “I want every dry-cleaner to do this,” Fo tells us. That’s her dream. “It’s just a little help, but you can do it. Whatever you do—do it in your own way.”