With the pipeline in federal hands, and Alberta politicians high-fiving each other, any antagonistic relationship will be hard to sustain 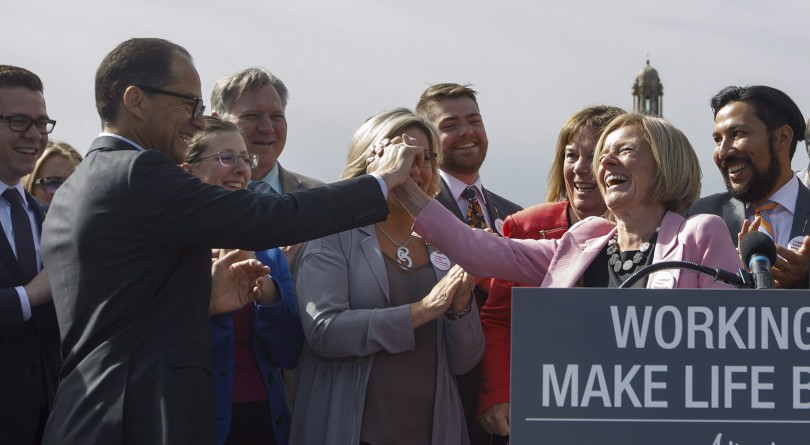 While there are many Canadians with mixed emotions about the federal government’s $4.5-billion rescue purchase of the Trans Mountain pipeline, spare a thought for two particular groups: the hardcore protesters who spent hours making giant “Stop Kinder Morgan” signs, and the pro-pipeline Albertans convinced that Prime Minister Justin Trudeau secretly wanted to join haughty Quebeckers and hippies from Vancouver in screwing over the oil sands. Those protestors need new signs to decry the same old pipeline under new public ownership. And the anti-Trudeau Albertans must face the fact that Trudeau is willing to take a massive financial and political stake in a bitumen pipeline’s success, and bringing along with it tax dollars of every Quebecker, British Columbian and all the rest of us.

Conservative critics liked to point to Trudeau policies like a federal carbon tax and tougher environmental assessments as a reprise of his father’s Alberta-harming National Energy Program (NEP, still the dirtiest acronym in much of Alberta). But to recall a bigger pro-oil-sands plum than this, you’d have to reach back before the Harper government and its “energy superpower” boosterism to 1996 and another Liberal prime minister: Jean Chretien, and his massive tax-deduction program for oil sands mining that begat the Fort McMurray boom and two decades worth of multibillion-dollar megaprojects.

It also helped secure a period of collegiality between Chretien and then-premier Ralph Klein (punctuated, albeit, by the sort of sniping Alberta conservatives are constitutionally bound to direct towards Liberal Ottawa). And if Alberta’s current premier was already cultivating chumminess with Justin Trudeau, both echoing the economy-plus-environment rhetoric on carbon policy, the love blossomed on Tuesday. Notley seized upon the Trans Mountain buyout as occasion for an outdoor celebration with her governing NDP caucus. “We said we would get the pipeline built, and we are getting it built,” Notley told reporters, as her elected human backdrop applauded and hooted. She acknowledged there were more challenges ahead, but added: “In the meantime, to all Albertans: pick up those tools, folks. We have a pipeline to get built.”

In the head offices of Calgary oil companies, there was some relief that Kinder Morgan’s weak stomach for the political, legal and regulatory challenges of modern pipeline-building didn’t make this the third coast-bound oil conduit to die in three years, after Enbridge’s Northern Gateway in 2016 and TransCanada’s Energy East last year. But that was tempered with the shock that it took the promise of full project nationalization to resuscitate Trans Mountain’s expansion, as well as some awkward acknowledgement that, come August, oil companies would likely be paying their tolls on the existing Trans Mountain pipeline to a Crown corporation. Not since the earlier days of Petro-Canada (started under Pierre Trudeau) has a federal entity stampeded into the oil patch.

While Notley said this would provide Trans Mountain the certainty it needed to go forward, her declaration could have used a bundle of asterisks and footnotes. A federal loan to Kinder Morgan will kickstart construction shortly, but it’s still unclear how Ottawa and authorities will deal with protests and civil disobedience in Greater Vancouver, and the pockets of fierce Indigenous resistance along the route. A decision also looms from the Federal Court of Appeal on six First Nations groups’ bid to quash Ottawa’s project approval on the basis of inadequate Indigenous consultation, as well as the B.C. NDP government’s iffy legal query about its ability to restrict bitumen flow into the province. Kinder Morgan wasn’t sure how far Ottawa would go to deal with any setbacks the courts or activists might deal it. It’s now up to Ottawa to act decisively to protect its own large investment and ensure there’s a confident buyer on the other side of this bailout.

Alberta, meanwhile, is offering a secondary backstop to Trudeau’s backstop. While details are murky, the province would cover up to $2 billion more in pipeline construction costs should they escalate beyond a unspecified federal comfort level. In return, Alberta would take a piece of Ottawa’s ownership share. This means that while Canadians each get a $121 share in Trans Mountain, every Albertan could be in for an extra $467.

There were dark jokes shortly after the New Democrats won election in this Conservatopia, that they’d start nationalizing industry. It was a long, weird, winding road to this joint venture with a Trudeau, and nobody’s clear where this goes next. Neither the NDP premier nor Liberal PM will be hailed as heroes for their dramatic intervention. But at least they avoid becoming scapegoats or villains. That’s a decent victory for them in these weird days in Alberta.