Canada's fight over 'where it all began'

P.E.I. is the birthplace of Confederation, right? Not so fast, argues New Brunswick, touching off an interprovincial squabble for the ages 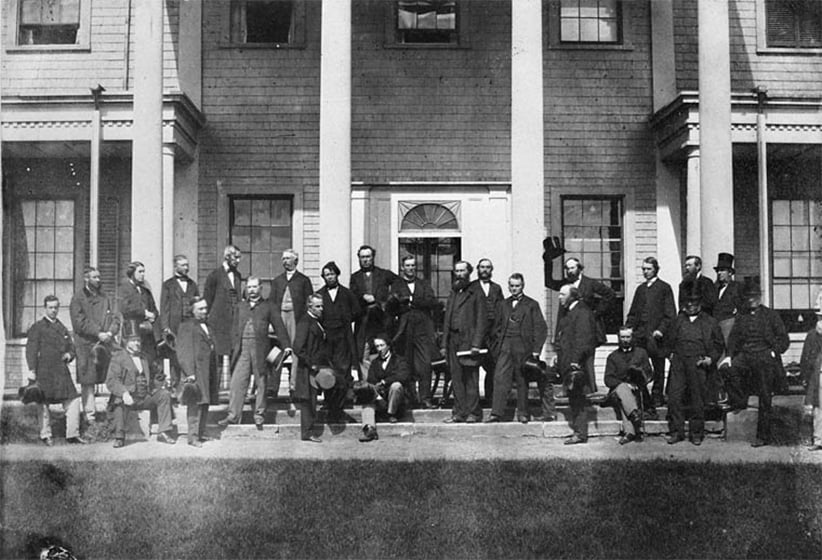 Delegates from the Legislatures of Canada, New Brunswick, Nova Scotia, and Prince Edward Island meet in Charlottetown, PEI, to consider the Union of the British North American Colonies. (Library and Archives Canada)

“Birthplace of Confederation” is stamped on Prince Edward Island license plates, the Confederation Centre defines the province’s downtown, and the Confederation Bridge is its umbilical cord. But in time for Canada’s 150th anniversary, New Brunswick is claiming confederacy credit, promoting a new slogan, “Celebrate where it all began.” So begins the debate.

“It makes sense that New Brunswick, with all of its smart Loyalist descendants, would have a much larger role than P.E.I.,” says James Oborne, a New Brunswicker whose great great grandfather was friends with one of the Founding Fathers. As for P.E.I., Oborne says the Island “has done quite well despite its sparse population,” but that calling itself the birthplace is “over the top.”

On a New Brunswick government website, as part of a 2017 tourism campaign, Premier Brian Gallant writes, “we should be proud here in New Brunswick of the role that we played in the history of Canada, after all, it is where it all began.” New Brunswick says it is not trying to steal the birthplace glory – comparable to kidnapping Anne–but Charlottetown wants its exclusive cradle status written in law. Complicating the birth history, Quebec also contends to be the genesis province, creating the impossible impression that Canada was born in three places at once.

“There’s lots that New Brunswick can brag about,” says historian Shawn McCarthy, a PhD candidate in history at the University of New Brunswick. “It doesn’t need to say ‘it started here.’” New Brunswickers base their claim on founding father Arthur Hamilton Gordon, a governor who, in 1864, invited Nova Scotia and P.E.I. to discuss unity. Gordon only wanted to unite the Maritime provinces; in fact, he detested the idea of a larger Canada. Nova Scotia and the Island didn’t RSVP to his invitation because Ontario and Quebec soon afterward proposed a more ambitious union. When all the provinces first met in Charlottetown in 1864, Gordon got upset and left. “Yeah, Arthur Hamilton set it in motion,” says McCarthy, “but what New Brunswick is going on is a technicality.”

New Brunswickers were as uncooperative as their governor, worried about tightened competition for business with America. Although three New Brunswick politicians supported confederation at the next conference in Quebec, constituents were furious when they returned. New Brunswickers only came around because joining Canada would protect them from the onslaught of American raiders (called Fenians). On July 1, 1867, after the province reluctantly joined, anti-confederate riots broke out in Saint John, hospitalizing people who needed their heads bandaged.

Today, those scars are being conveniently overlooked. “As one of the founding provinces, New Brunswick has a deep history in rooting what Canada is today,” says the Dept. of Tourism, Heritage and Culture, in an e-mail. “We recognize Charlottetown as the ‘cradle of Confederation,’ but we want to augment that by saying three provinces had a role.”

Oborne, whose ancestor was friends with Founding Father Sir Samuel Leonard Tilley, also says that Canada’s name was conceived in his family’s New Brunswick backyard. Tilley proposed the name “Dominion of Canada,” as the country was called until post-WWII, after reading a Bible passage mentioning God’s sea-to-sea dominion, and Oborne says that Tilley read the passage in Fredericton while sitting on his great great grandfather’s stone bench.

Islanders argue that New Brunswick did not–at all–begin “it all.” In March 2016, MP Wayne Easter introduced a bill, citing former prime minister Jean Chretien’s proclamation in 1996, that “Charlottetown, Prince Edward Island is recognized as and declared to be the birthplace of Confederation.” Then in January, after the launch of New Brunswick’s “Where it all began” tourism campaign, Island Sen. Diane Griffin brought forth a bill that matches Easter’s bill.

However, P.E.I. might not deserve the birth certificate, either. After hosting the Charlottetown Conference in 1864, it refused to join Confederation; it even considered becoming an annex of the United States. It only changed its mind six years later to avoid paying high rent to British landlords and to pay off its debt.

After Charlottetown, Quebec was the province to host the follow-up meeting, which Quebecers se souviennent. “When the delegates to the Quebec Conference gathered here,” wrote the Governor General of Quebec in 2014, “they laid the basis for a country…” The City of Quebec has also erected a statue of Etienne-Paschal Tache, the chairman of the conference, whom the Governor General called the “too-often-forgotten Father of Confederation.”

There is no “I” in “Canada,” but there is an “I” in “tourism.” For each province, the historical title could mean visitors this summer. When Lonely Planet named Canada the top destination for 2017, it introduced Charlottetown with the province’s preferred motto, while also calling Quebec City the “grip on French Canadian identity” and noting that Saint John was a business and political hub during the country’s early days—“in the 20th century, New Brunswick was a very big deal.”

How about a compromise? Canada was conceived in Saint John, incubated in Quebec City and born on the Island? “They can have whatever slogan they want,” maintains Robert Pierce, director of the P.E.I. Genealogical Society, “but the meeting happened in Charlottetown.”