At 6:25 p.m. on Jan. 2, Nick Kouvalis sent out a tweet suggesting that the Canadian government was, among other things, directly funding known terrorist groups. Kouvalis, who is campaign manager of Conservative leadership candidate Kellie Leitch, has a history of posting provocative, absurd and often completely false information. He does so, he says, “to make the left go nuts.”

This post-New Year’s missive was no exception. “This was sent to me today. Discuss,” Kouvalis wrote. “Trudeau hands out Billions [sic] to other countries while Canadians stand in line at Food [sic] banks,” the post read. According to the following list, “Prime Minister Justin Trudeau” had given a total of nearly $13.5 billion to foreign groups and organizations, including $600 million to the Clinton Foundation and $351 million to Hamas, which is listed as a “terrorist entity” by the federal government.

The post was easily debunked; it took Maclean’s Alberta correspondent Jason Markusoff about five minutes to find that the post likely originated as an anti-Obama Internet meme—complete with identical numbers.

The response to Kouvalis was quick and predictably furious. “Pathetic,” “liar” and “fool” were some of the printable insults launched at the 41-year-old. Others wondered whether Kouvalis, an admitted recovering alcoholic, was drinking again. Others still said they would take up a Conservative party membership for the expressed purpose of defeating Leitch.

Kouvalis didn’t retract the statement—or the one from three days before, when he posted a quotation regarding immigrants, widely (and falsely) attributed to former prime minister Wilfrid Laurier. And for good reason: Kouvalis’s team is building a database of the negative reactions to his missives, then attempting to flush out real names from social media’s sea of anonymity.

Those names will then be checked against the Conservative party’s membership list to see if anyone joined simply to vote against Leitch during the party’s nomination in May. If they did, the Leitch campaign will challenge the legitimacy of these memberships when the party releases the final membership list in April.

“We call it Operation Flytrap,” Kouvalis says. “We did it knowing that people who aren’t real Conservatives can’t help themselves, so they post something negative about me, or Kellie. Some of them use real names. We find out who they are, and check them against the membership list. I’m going to challenge as many as I can.” 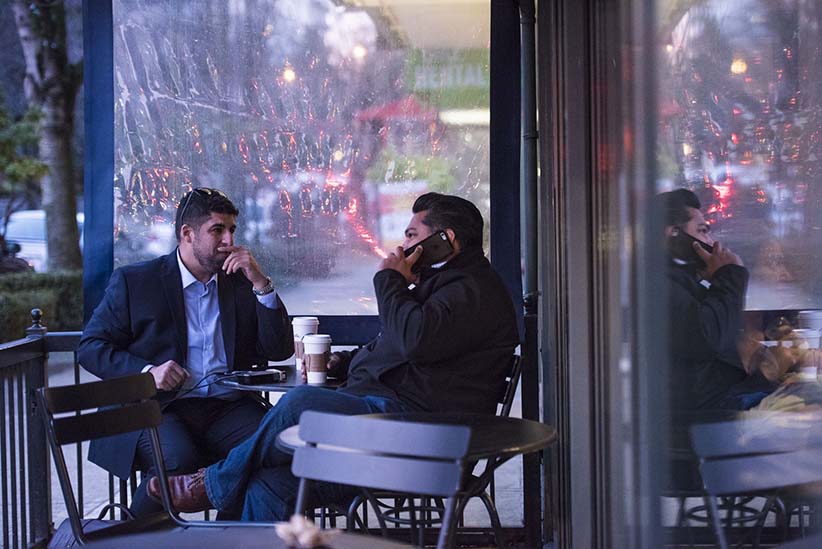 January 5, 2017 – Vancouver, BC – Nick Kouvalis at a coffee shop in Vancouver. (Photograph by Jimmy Jeong)

In November, after Leitch sent out a congratulatory note to president-elect Donald Trump, her campaign saw another uptick on social media in the number of people pledging to buy memberships to stop Leitch. Kouvalis says he will target new party memberships, as they are the most likely to be bought by anti-Leitch types.

“In total, we’ve harvested between 7,000 and 8,000 names from Twitter. We got about 1,000 from that fake news thing,” Kouvalis says. The campaign has an additional 18,000 names from various anti-Leitch Facebook posts.

At stake is the hotly contested Conservative leadership race. The vote, which takes place on May 27, is a ranked ballot, meaning the estimated 100,000 Conservative members will rank their preferences for leader. Should no candidate get over 50 per cent, the lowest scoring candidates are eliminated and their second-place votes counted until one candidate gets the majority of the 100 points that have been allotted to each of the 338 ridings.

“The race for first, second and third place could come down to 500 points,” Kouvalis says. Culling 1,000 votes against Leitch, whose campaign has been decidedly divisive, could be key for her to win. “You have to be a member in good faith.”

Audacious as the plan may be, getting a Conservative party member rejected is a difficult process. To join the party, a person needs only to pay $15, be at least 14 years old, agree with the party’s list of 22* principles and not be a member of any other federal political party. Each challenge would have to be put to the party’s National Council—and simply joining to vote against a certain candidate isn’t enough. (Grounds for revocation include being a member in another party, or “singularly damaging, or persistent, conduct [the National Council] judges improper or unbecoming of the Conservative Party of Canada.”)

“It’s not an easy thing to do. It’s tough to get a solid argument down, and if you’re going to do that multiple times over … I mean, it’s not impossible, it’s happened before, but it requires a little bit of grunt work,” says Conservative spokesperson Cory Hann. The party also has a stipulation saying any leadership candidate who challenges memberships “frivolously” is subject to a fine.

“I liked her stand on immigration, as far as it went, and that she stuck to it despite the usual criticism,” Fromm says. “The way demographics are going, white Europeans are going to be in the minority in this country by 2050, if not sooner.”

In an email to Fromm sent Dec. 22, Leitch campaign co-chair Sander Grieve wrote, “We have not processed your membership and we will not be submitting it to the party, as we believe your public statements are not consistent with the principles of the party or the policies being advanced by our campaign.”

Mark that down as one less vote for Kellie Leitch.

*Editor’s note: This version of the article has been updated to reflect that the Conservative Party has 22 principles, not 11 as originally stated.