Interactive timeline: What happened in Ottawa

An audio, visual and by-the-numbers timeline of the events leading to and following the shooting in Ottawa

6:35 p.m. The Ministry of Public Safety announces that it is raising the probability of a terror attack in Canada from “low” to “medium” after a Quebec man named Martin Couture-Rouleau hit two soldiers with his car, killing one, in Saint-Jean-sur-Richelieu, south of Montreal. The attacker was then killed by police. However, the ministry adds that this increased alert is not an indication of a specific terror threat.

Around 9:50 a.m. A Toyota Corolla with no licence plates pulls up outside the National War Memorial in Ottawa. At least one man, described as “a tall man with long hair,” around 45 years old and carrying a rifle, is seen jumping out and running toward the memorial, where soldiers are performing drills while two other soldiers are standing guard. The man emerges from behind the memorial and according to RCMP Commissioner Bob Paulson at a later press conference, fires twice at one guard and once at another guard, missing the latter. Witnesses report hearing four shots. Ottawa police are notified.

9:51 a.m. Witness Barry Willis says that the gunman hijacks a car and drives toward the Centre Block of the Parliament buildings.

9:52 a.m. RCMP cameras capture the shooter arriving on the grounds of Parliament Hill.

9:53 a.m. Gunman enters Centre Block; shooting begins. MP Gerry Byrne is meeting on Parliament Hill when he hears the sound of gunfire and sees the arrival of the RCMP. MP Mark Garneau, too, is in a meeting when he is told to evacuate the building. Other MPs are about to begin a caucus meeting when they hear dozens of shots, which they initially mistake for construction before being told to evacuate. Many MPs, including a group of NDP members, are clearly shaken as they leave the premises. 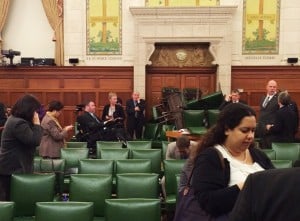 9:56 a.m. More shooting breaks out in the Hall of Honour. Some MPs use furniture to create a makeshift blockade for the door in the Conservative caucus room. MP Maurice Vellacott says that he was taking a tour group through Parliament Hill and one visitor glimpsed the identity of the suspect.

9:57 a.m. The suspect’s body is seen on the floor outside the Library of Parliament. His shooter is reportedly House Sergeant-at-Arms Kevin Vickers, a 29-year veteran of the RCMP. 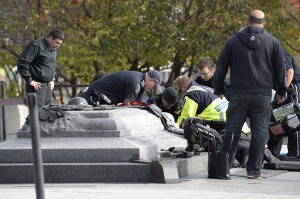 10:03 a.m. Paramedics administer CPR to the soldier who was shot near the War Memorial.

10:24 a.m. The Rideau Centre, a shopping mall near Parliament Hall, is evacuated due to reports that shots were fired nearby. These reports are later confirmed as false by the Ottawa police. 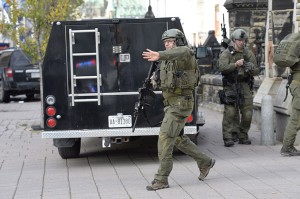 10:40 a.m. Ottawa’s city hall and all federal buildings are placed on lockdown; police order bystanders to move as far away from Parliament Hill as possible.

11:21 a.m. The shooting suspect in Centre Block is confirmed as dead.

12:43 p.m. Ottawa Civic Hospital confirms two other victims besides the fallen soldier. One victim has been shot; both are in non-life-threatening condition. 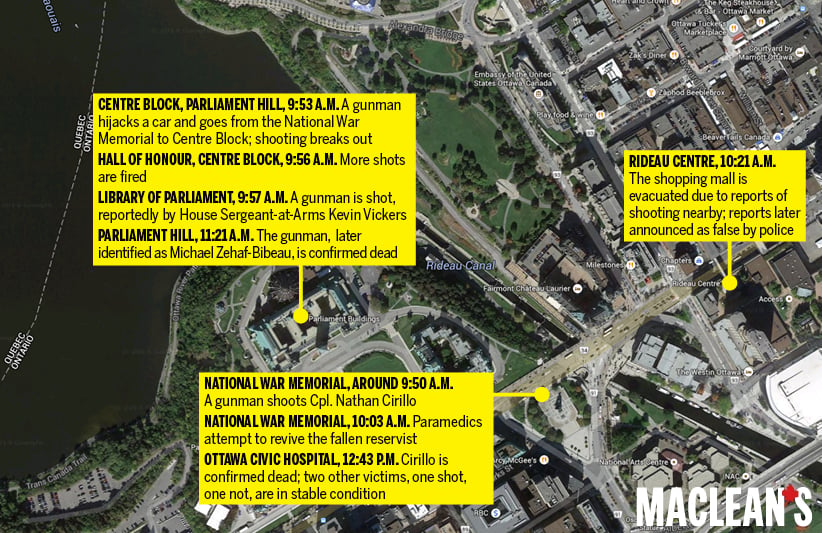 12:52 p.m. Minister of Employment Jason Kenney is among the first to report that the War Memorial shooting victim, a Canadian Forces reservist from Hamilton, has died.

1:28 p.m. The NHL officially postpones the evening’s game between the Toronto Maple Leafs and the Ottawa Senators in Ottawa.

1:45 p.m. Ottawa police issue their first press release, confirming shootings at the War Memorial and on Parliament Hill, but denying that any shooting occurred near the Rideau Centre. The police confirm that no living suspects are in custody yet and warn Ottawa residents to “stay away from the downtown area.” 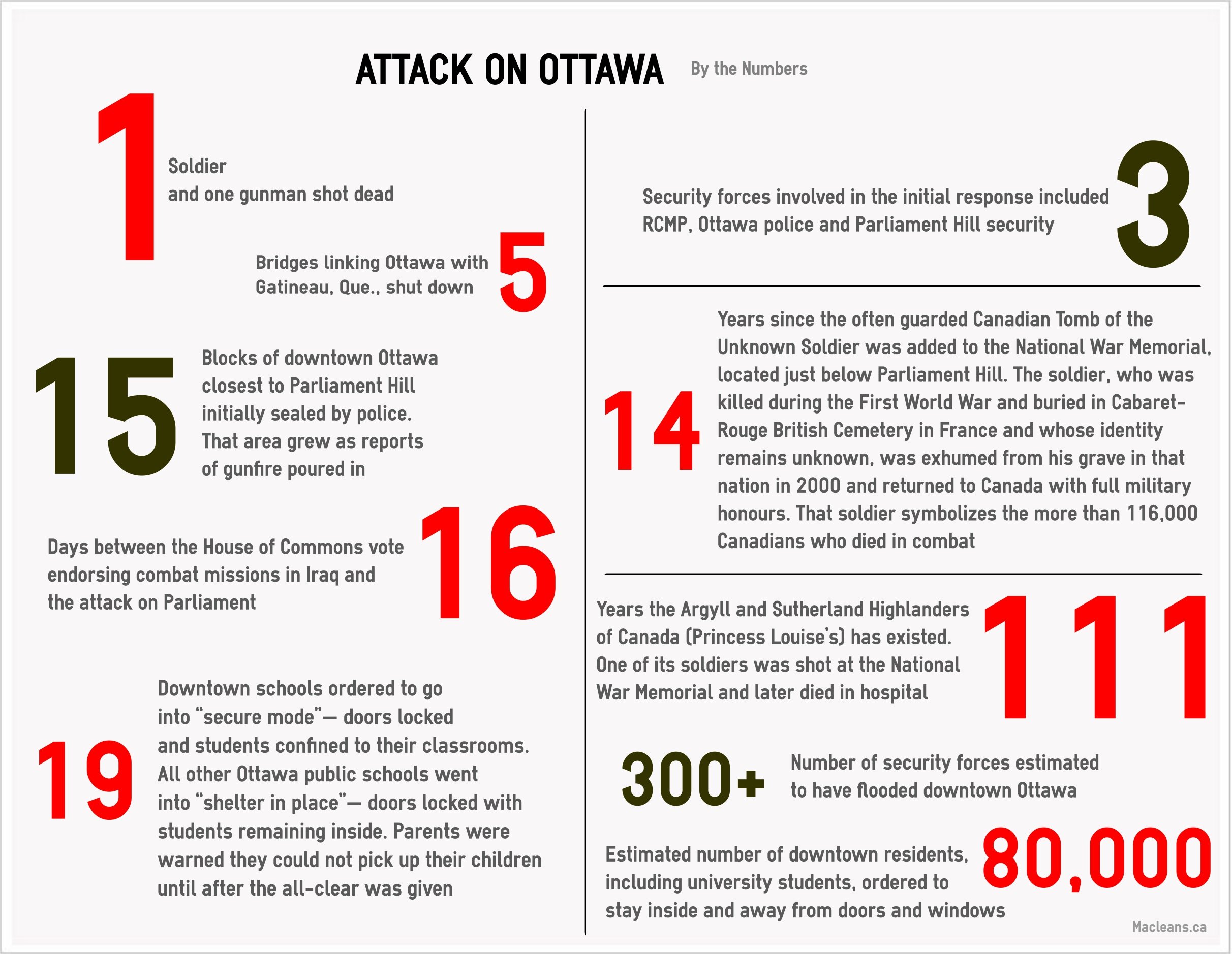 2:30 p.m. Jim Watson and RCMP members hold a press conference, where it is confirmed that the soldier has died.

3:42 p.m. The lockdown at the University of Ottawa is lifted.

4:54 p.m. ABC News reports that the shooter was Michael Zehaf-Bibeau. 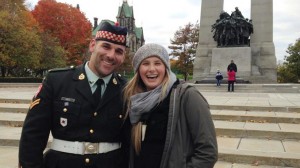 5:15 p.m. Through various reports, the victim is confirmed as Cpl. Nathan Cirillo. On Twitter, Megan Underwood sends out a photo she had happened to have taken of Cirillo on Sunday, when her friend was visiting the War Memorial. It has since been retweeted more than 26,000 times.

8:10 p.m. Prime Minister Stephen Harper makes a public address to the nation. “Let there be no misunderstanding: we will not be intimidated,” he says in his speech. “Canada will never be intimidated.”

8:30 p.m. Harper’s address is followed by speeches from Opposition Leader Thomas Mulcair, who says that although shaken, Canada “shall not waver,” and Liberal Leader Justin Trudeau, who promises Canada “will remain resolved.”

9:00 a.m. Stephen and Laureen Harper go to the War Memorial to lay a wreath in memory of Cpl. Cirillo. The CBC reported that a man crossed police tape and was arrested nearby during the Prime Minister’s visit; the man was found to be “no threat.”

10:01 a.m. With the House preparing to sit after an emotional day, Sergeant-at-Arms Vickers enters as part of his daily procession—this time, imbued with new meaning. He is greeted by a sustained ovation from grateful MPs lasting three minutes, followed by the banging of tables.

10:15 a.m. A book of condolence is placed at Hamilton City hall for Cpl. Nathan Cirillo.

11:00 a.m. After each party leader delivers remarks to the House, the House gets back to business.

1:25 p.m. Michael Zehaf-Bibeau’s parents issue a statement to the Associated Press, saying they are “sorry” for what their son did and apologize for “all the pain, fright and chaos he created.”

1:41 p.m. A coalition of Canadian Muslim groups denounces the attacks and unequivocally condemns terrorism as incompatible with the principles of Islam.

3:47 p.m. RCMP Commissioner Bob Paulson gives a press conference detailing what transpired. He revealed that Zehaf-Bibeau had applied recently for a passport—hoping to leave for Syria—used a 30-30 Winchester gun, and was not one of the 90 high-risk travellers the RCMP is investigating.

Related:
Where were you when the Ottawa shooting happened? Tell us your story
Paul Wells: Parliament Hill under siege
In the shadow of the Toronto 18
Ottawa shooting: Photos from the scene
Map: Ottawa in lockdown