Glenn Greenwald on what Canada should not do now

The lawyer, journalist and provocateur on the Islamic State, attacks on Canada, and the U.S. after 9/11 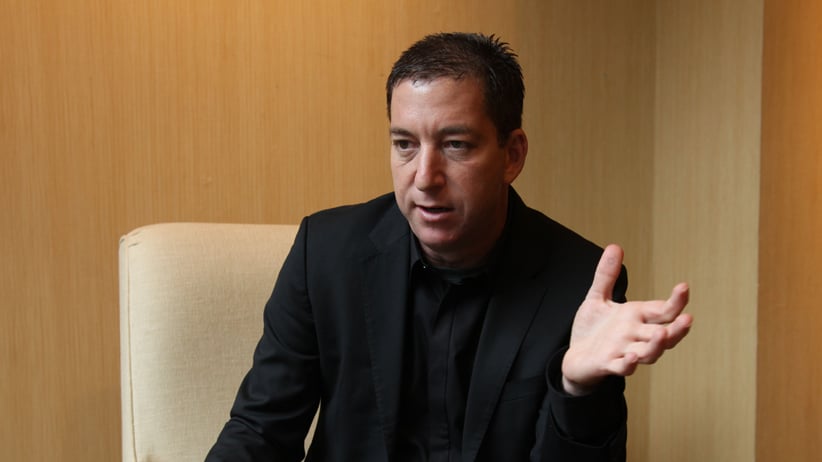 Glenn Greenwald wears several hats. A lawyer by training, he rose to worldwide prominence as the journalist who helped publish top-secret documents obtained by ex-National Security Intelligence contractor Edward Snowden in 2013. These documents revealed the extent of the American and British government’s global surveillance program. He is also a provocateur, penning a column suggesting the murder of Warrant Officer Patrice Vincent, killed in a hit and run by Martin Couture-Rouleau, was the product of Muslim rage against Canada’s foreign policy. The column took on new resonance, and garnered further outrage, after the shooting death of Cpl. Nathan Cirillo on Parliament Hill less than 48 hours after Vincent’s death.

Q: You recently wrote, “The violence has clearly identifiable and easy-to-understand causes. Namely, anger over the violence that the country’s government has spent years directing at others.” In June, Justin Bourque killed three RCMP officers in New Brunswick because he felt the state was oppressing him. James Holmes shot up a movie theatre in Colorado because he apparently didn’t want the audience to worship his hero, Batman. Do we really have an issue with a certain country’s actions, or an issue where people with apparent mental issues latch on to what they think ails them, and respond violently?

A: There are clearly different causes to different types of violence. I’m talking about this very specific narrative that the Canadian government almost instantly disseminated that this was done for ideological purposes, specifically some kind of connection to radical Islam. I haven’t looked at the evidence of what actually motivated these individuals. I was saying that let’s assume this narrative is true, that they were acting out of ideological causes as opposed to mental illnesses or these other causes, which the government seemed to have excluded rather quickly. The point was, if you want to look at it through an ideological prism, it’s delusional to say that we’re just this innocent country, and nothing can explain us being attacked other than religious extremism when, in fact, there are all kinds of rational reasons why someone would want to do that.

Specifically what Canada is doing overseas. By rational it doesn’t mean justifiable. It means a rational train of thought that you can trace.

Q: Zehaf-Bibeau had told a friend that the devil was literally following him. It sounds like there’s a common thread in all of this, and it’s not Islam.

A: You’re actually refuting the prevailing narrative about these attacks more than I am. You’re saying that they’re devoid of any sort of political or ideological motive. Yet there is a clear pattern of people who identify as Muslim acting against the very government involved in these policies that make hundreds of millions of Muslims around the world exceptionally indignant. And of course, some of them are probably motivated by mixed causes, but there’s clearly a pattern here, and I don’t think it can be denied.

Q: If, as you say, millions of Muslims are indignant, you’re a good example of what to do. You’re indignant at Western governments, so you do what any well-adjusted person would do. You write, you make yourself heard, you investigate, you refute. You don’t shoot someone.

A: I don’t agree with the premise of your question at all. It suggests that Western governments can go around the world, imprison people without charges, invade their countries, drop bombs on them from 35,000 feet, and the only legitimate response to this systematic violence by Western governments is to write newspaper articles and speak out.

Q: You used the word “legitimate” there. So is what has happened legitimate?

A: Look at the case of Omar Khadr. Here’s somebody who was in Afghanistan, whose family is from that region, and what got him labelled a terrorist and sent to Guantánamo wasn’t blowing up a shopping mall or killing civilians. He targeted the soldiers who were invading and occupying.

Q: So if I feel that the state is oppressing me for whatever reason, is it legitimate for me to go out and shoot cops?

A: It depends what the level of oppression is. I think that most people in the Western world regard the American Revolution as justifiable, and that relied almost exclusively on violence against authorities, soldiers, police officers. The American and Canadian governments support violence of all kinds, including things that are done against authorities that they consider oppressive. So, I think we’re very good at giving ourselves licence to use violence for political ends, and not very good at thinking other people have that same licence.

Related post: Life during wartime: We are all witnesses to war

Q:  You use the word “justifiable.” Omar Khadr was in a war situation. We had an unarmed soldier shot dead for standing at a war memorial.

A: I don’t think anyone thinks that soldiers who are off-duty or not deployed in a war zone are a legitimate target. In fact, under the laws of war that would be a war crime. At the same time, the U.S. government, the Israeli government—its allies use that kind of permissive standard to target people all the time. We in Western countries learn all about our own victims. We know their names, we hear from their grieving parents, but we hear almost nothing about the victims of our own violence. People around the Muslim world hear a lot about that, and so I don’t think it’s justifiable, but I think it’s natural when you see governments using this kind of violence all around the world to do the same in response. Just look at the orgy of violence unleashed by the United States in response to a one-day attack on 9/11.

Q: So it’s a question of the U.S. having the capability of outsized reactive violence, and the Muslim world by most accounts doesn’t, so they use their bodies and guns?

A: Precisely. When you talk about how the United States engages in violence and militarism, its technological capabilities are such that no other military can challenge it, so the only way to bring violence back to a government even like Canada is through asymmetrical warfare. It’s what Quebec separatists used, it’s what groups around the world used when faced with what they perceive as an unjust force that can amass violence on an organized scale that they’re not capable of.

Q: We had two attacks in less than 48 hours. What the worst possible thing our government could do in reaction?

A: Overreaction, and allowing the government to manipulate understandable emotions of anger, fear and horror in order to justify more secrecy, detention and surveillance in the name of an extremely remote threat. If you’re a Canadian citizen you have a greater chance of slipping in your bathtub and hitting your head or being struck by lightning than you do dying in a terrorist attack. I think a lot of Americans have learned that overreaction and allowing their fears to be exploited to dismantle our basic principles of Western justice and civic protections is a far, far greater danger than the threat of terrorism.

Q: 9/11 was a coordinated attack with a lot of planning involved. Fast-forward 13 years and you have these so-called lone wolves going out perpetrating what we’ve seen recently. How does a government prevent that?

A: It’s very possible that you may not be able to, any more then you can prevent fatal car accidents or murders. There’s no such thing as absolute safety. I think one of the harms of how we think about terrorism in the wake of 9/11 is that we want our government to prevent every single bad thing done in the name of terrorism. A society that pursues security as its absolute paramount value is by definition destined to become authoritarian. No politician will admit it because it sounds callous, but the reality is that in open and free societies some degree of violence and attacks are inevitable.

Related post: Lone-wolf attacks and the future of terror

Q: In a sense, there’s a romantic notion to Islamic State’s social media campaign. The group is essentially saying: “Come and fight with us. We are literally putting lead to the enemy. We are creating our own society.”

A: That’s been the paradox for so long. If you talk to people in Yemen, they’ll say that prior to the U.S. drone campaign, which escalated around 2009, al-Qaeda had almost no foothold there. Since then, the more drone strikes there have been, the more Yemenis were driven into the arms of al-Qaeda. [Islamic State] is still a pretty disliked entity in the Muslim world. But the more they are perceived as defending Muslims against this outside aggression, the more appeal it will have.

Q: So Islamic State is basically al-Qaeda with a better PR strategy.

A: I think Islamic State has a better understanding of how to communicate in a way that triggers responses in the West, maybe because there are more Westerners determining their communications strategy, but it definitely seems to be the case that they are very adept at playing the West like a violin.