Is Canada prepared for a chemical weapon attack like the one in the U.K.?

If a nerve agent like Novichok was used here, there are antitodes on hand to save a few of victims. A larger attack would test Canada's readiness. 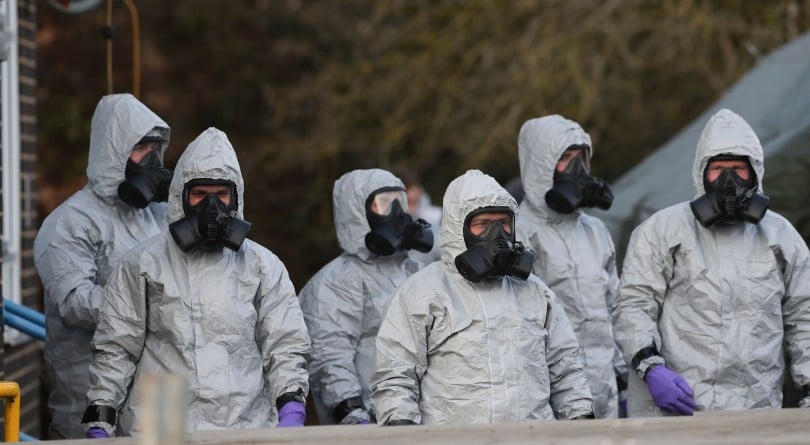 Personnel in protective coveralls and breathing equipment work at the Salisbury District Hospital in Salisbury, southern England, on March 10, 2018, after a man and a woman were poisoned in a nerve agent attack. (DANIEL LEAL-OLIVAS/AFP/Getty Images)

Gaibrie Stephen is a Toronto-based resident physician and writer with an interest in health systems and  primary and critical care, Tanishq Suryavanshi is a medical student and writer interested in health innovation and emergency medicine, Blair Bigham is a journalist, scientist and physician based in Hamilton, Ont.

On Mar. 4, an ex-Russian spy and his daughter were found slumped over a park bench in the English church town of Salisbury (pop. 45,000), poisoned by what authorities have now confirmed to be a Cold War nerve toxin called Novichok. The first use of a chemical weapon in the U.K. since WWII, the news made headlines and sparked intrigue around the globe.

Novichok, which is deadlier than similar toxins like Sarin and VX, sent Sergei Skripal, 66, and Yulia Skripal, 33, to a British hospital along with detective sergeant Nick Bailey, one of the first police officers on the scene. The U.K. government said that more than 130 people could have been exposed in the attack and buildings in the area had to be emptied and decontaminated. More than 50 were assessed in local hospitals.

What would happen if a nerve agent were to be used on this side of the pond? Maclean’s asked experts, including paramedics, ambulance services, physicians, hospitals, toxicologists and government ministries and agencies—some of whom were not authorized to speak on record publicly about national security plans—to paint a picture of what chain of events might happen here if a similar attack were launched on Canadian soil.

Novichok belongs to a category of chemicals called organophosphates, which interfere with control of muscles and secretions by affecting nerve transmission. Weaponized pesticides, like Sarin and VX, are often used to inflict death on entire communities, as we’ve seen recently in Syria.

Novichok, the ingredients for which can be transported separately then mixed together to become deadly, is believed to have been developed by Soviet scientists during the Cold War to bypass international regulations on the manufacturing and transport of nerve agents that were put in place shortly after WWII.

Much of the history and properties of the toxin is shrouded in secrecy, but a 1996 essay by chemical weapons expert Jonathan B. Tucker claims Novichok is five-to-eight times more powerful than VX, and is believed to defy medical treatment. The powder can enter the body through ingestion, inhalation or contact with the skin, having effects as quickly as 30 seconds after exposure.

When Novichok enters the body it disables an enzyme that breaks down the neurotransmitter acetylcholine, leading to overstimulation of cholinergic nerve receptors and producing a constellation of symptoms called a toxidrome. Experts recognize the toxidrome by observing “SLUDGE”: salivation, lacrimation (tears), urination, diaphoresis (sweating) and gastric emptying (vomiting and diarrhea).

Death is caused by a combination of weakness of the muscles that control breathing and lung secretions that prevent oxygen from entering the bloodstream. Early and aggressive emergency care is required to survive.

How do emergency responders treat Novichok?

Emergency care revolves around two time-sensitive interventions: drying the deadly secretions in the lungs, and reversing the nervous system effects of the toxin.

The antidote atropine dries up the excessive salivation and reduces secretions that clog up the airways, countering the effects of excess acetylcholine. Atropine is most commonly used in heart rhythm disturbances where up to one milligram of Atropine is used, but patients with organophosphate poisoning may require up to 100 milligrams.  That far exceeds the three milligram stock of an ambulance, and may even deplete an entire hospital of its supply.

Another drug used for severe cases is pralidoxime, which relieves the muscular effects of the nerve toxin. For weaponized pesticides, pralidoxime needs to be administered within minutes, before the poison binds irreversibly to its target; but pralidoxime is a hard drug to find outside of large hospitals. In some cities, specialized ambulances carry a few doses, but most do not, and even large downtown hospitals only have a handful of doses stocked.

How would response to an attack unfold?

Victims exposed to sufficient doses of organophosphates become ill rapidly and are incapacitated.  It is likely that 911 dispatchers would deem the situation to be a medical emergency and assign paramedics to the call.

Dugg Steary, a 22-year veteran paramedic with experience treating organophosphate poisoning, says Canada’s paramedics are trained and deal with the toxidrome, most commonly seen on farms from civilian pesticides. “On a farm or with multiple casualties, organophosphates will be high on our list. However, patients slumped over on a park bench in the city may not spark the thought of organophosphates right away.”

Paramedics and firefighters would initiate decontamination and alert nearby hospitals that there may be a chemical incident. Decontamination, says Steary, is key to prevent first responders from becoming victims. Failure to do so could cripple the emergency response system, potentially leading to sick health care workers and hospital shutdowns.

Once alerted, hospitals have regimented plans and would jump into action, says Dr. Sara Gray, the former medical director of emergency preparedness at St. Michael’s Hospital in Toronto. Large hospitals often have their own chemical decontamination team. Teams would set up a dedicated decontamination zone outdoors where arriving patients would be undressed and washed with soapy water, while patients already in the ER would be moved to other areas of the hospital.

Once the patient has been decontaminated, the focus shifts to determining the source of the contamination; that allows doctors to know how to treat the symptoms. Toxidromes would be picked up, and appropriate antidotes given, while lifesaving supportive care would be given simultaneously.

Because extremely high doses of antidote are needed, and because terrorist attacks often target large crowds, 911 systems and hospitals can become quickly overwhelmed, especially in smaller communities that may not have the same resources as a large downtown hospital.

Hospitals turn to neighbouring institutions for antidotes and extra life support machines while regional health authorities access antidote and ventilator stockpiles. For large-scale events, the Public Health Agency of Canada (PHAC) maintains a national emergency stockpile at a depot in Ottawa and smaller facilities across the country; spokeswoman Sindy Souffront says antidotes can arrive within 24 hours if requested by any province, likely too late if local hospitals run out of antidote while caring for multiple patients.

Local police and hospitals would gather clothing, body fluids and samples from the scene and send them to the RCMP’s National Forensic Laboratory Service, which is capable of determining exactly which chemical weapon has been deployed.  The lab, located next to a Canadian Tire in suburban Ottawa, maintains samples of drugs—called reference standards—and collaborates with intelligence partners in the U.S. and U.K.

While identifying the exact chemical is not important for the immediate management of victims, it would be key in the multi-agency investigation that would follow any deployment of Novichok, or any other terrorist weapon, in Canada.

For an attack like the one in Salisbury, it is reasonable to assume that Canada’s system would be capable of saving a victim or two, as seems to be the outcome in the UK. Would the outcome be the same if Canada faced a larger attack by Novichok? Likely not.

One hospital interviewed, in a city twice the size of Salisbury, carries only enough pralidoxime to treat one patient. While official provincial and federal response plans exist, the Maclean’s investigation found confusion over how frontline personnel would obtain antidotes from stockpiles. (The Ontario government referred us to the federal government, and vice versa.)

It’s likely that an attack targeting crowds, and not just one individual, would lead to a massive response by all levels of government; whether or not that response would be fast enough to save lives is not clear.

The attack in Salisbury, and ongoing use of chemical weapons on Syrian civilians, highlights the need for governments to reassess Canada’s frontline readiness to respond to chemical weapon attack.