Is Omar Khadr coming back to Canada?

The answer from Ottawa is an emphatic 'no' 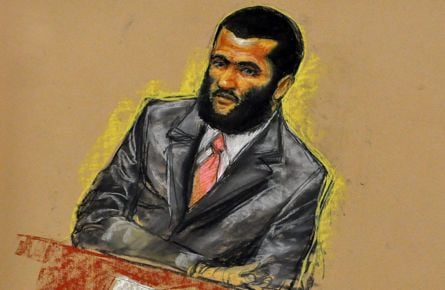 More than eight years after being shot and captured on an Afghanistan battlefield—at the tender age of 15—Omar Khadr could be on his way back to Canada. Or not. It all depends on which source you believe: the anonymous kind, or the prime minister.

The ever-unreliable Khadr rumour mill started churning again this morning when Al Arabiya, a news channel in Dubai, reported that a settlement has already been reached: in exchange for pleading guilty to terrorism charges, the station said, the Toronto native will be allowed to leave the notorious U.S. prison camp at Guantanamo Bay, Cuba, and serve the remainder of his sentence (whatever it is) in a Canadian jail.

Nathan Whitling, one of Khadr’s Edmonton-based lawyers, would only say “that there is a potential deal in the works” and refused to provide further details. But “unnamed sources” are filling in the blanks. According to the Toronto Star, the deal was proposed by Khadr’s defence team and approved Wednesday night by the convening authority for war crimes tribunals at Gitmo. The National Post goes one step further, saying Khadr will plead guilty to all charges he faces—including murder—and will serve eight more years in prison, seven of them in Canada.

What does Stephen Harper make of the rumours of Khadr’s imminent return? Not true, he says. “Khadr (is) facing serious charges in the U.S.,” said Dimitri Soudas, a PMO spokesman. “These serious charges would have to be addressed in the U.S. Therefore there is no such agreement.” Lawrence Cannon, the Foreign Affairs minister, was equally adamant. “The rumour is not correct,” his office said.

If Khadr really is coming home, it’s safe to assume that the feds would know something about it. Ottawa and Washington have a longstanding treaty that allows Canadian citizens convicted of crimes in the U.S. to serve their time on home soil, but any such transfer would require the government’s blessing. And according to the relevant legislation, the International Transfer of Offenders Act, Ottawa has a wide range of reasons to deny such an application. Prisoners can be refused if they are deemed “a threat to the security of Canada,” or if they “left or remained outside Canada with the intention of abandoning Canada as their place of permanent residence.”

In the case of Omar Khadr—the son of a notorious al-Qaeda financier, and a boy (now man) who allegedly tossed a grenade that killed a U.S. soldier—both of those clauses could easily apply.