It's all about May

The Greens are both praising and blaming their leader 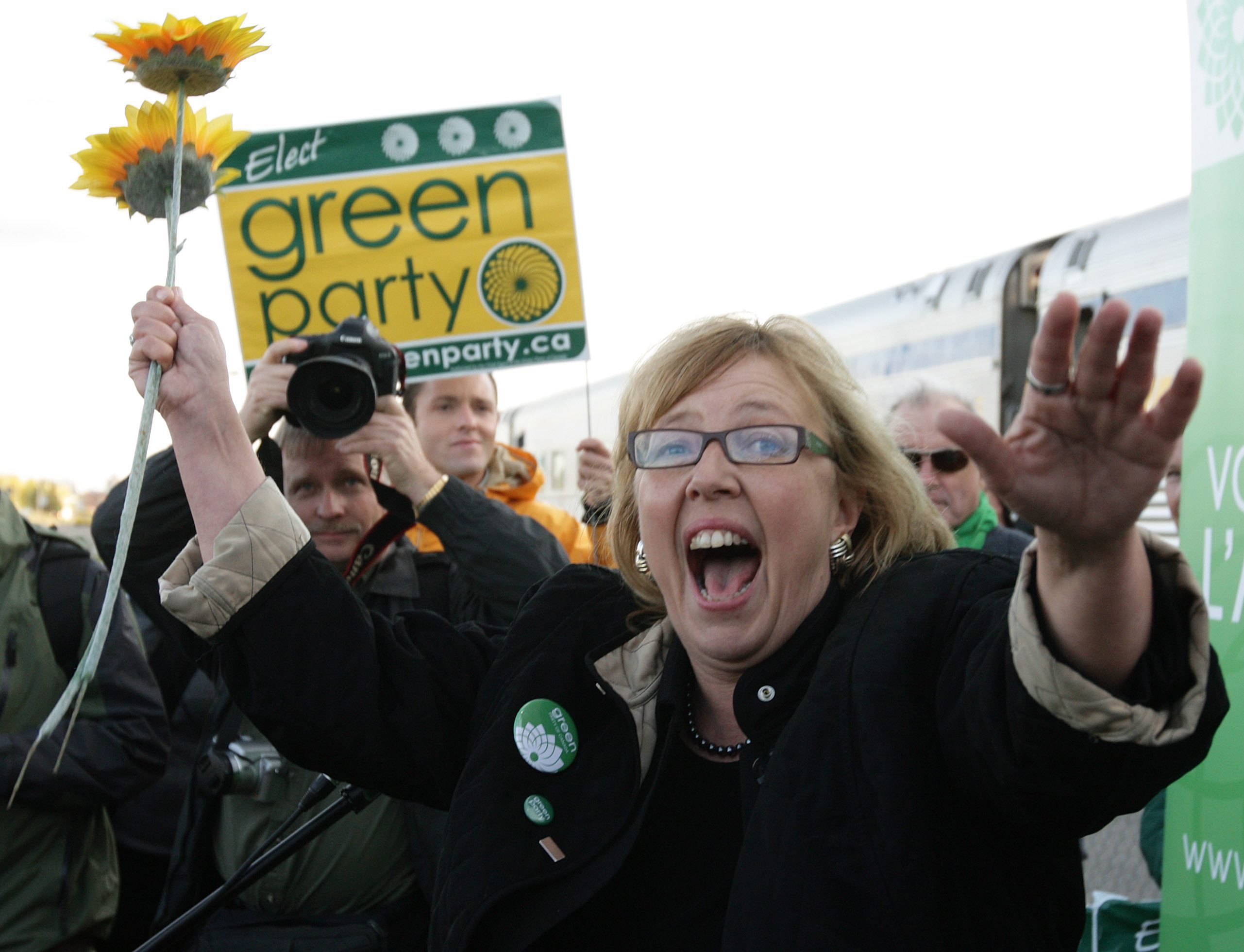 For a glimpse of factions roiling within the Green Party of Canada, the events of Oct. 19 tell the story. That night, the party’s 26-person federal council sent out a release stating it had unanimously passed a motion confirming its full support for leader Elizabeth May. Only hours earlier, a petition calling for a special meeting to review May’s leadership had begun circulating among the 202 officers of election district associations, or EDAs. Meanwhile, another group was working on a plan code-named “Project June,” as in, “What comes after May?”

Much of this dissent stems from the election, a campaign May rightly calls a “watershed” for the party: the former activist muscled into the leaders’ debates, established the Greens as the fourth national party and upped electoral support by 41 per cent. Yet the true measure of political success—seats—didn’t materialize. May’s bold attempt to usurp Peter MacKay in Central Nova, N.S., proved quixotic. The party’s share of the popular vote, at 6.8 per cent, fell far below the 11 per cent that polls had been predicting a week earlier.

May expresses disappointment that seats weren’t won but frames the outcome more positively: “We’re the only federal party that actually received more votes in 2008 than in 2006,” she says. She boasts that the Greens bested the Conservatives in drawing an uptick in voters: “Mr. Harper won more seats [than in 2006] but had 150,000 fewer voters; we had 270,000 more people voting Green [than in 2006].” Ironically, such talk, with its focus on Harper, is precisely what has Greens signing performance-review petitions.
Not that it appears May is going anywhere, which makes the charismatic leader the biggest challenge facing the party. She’s both the Greens’ major asset and central flashpoint. Even her detractors credit her formidable intellect, ability to inspire and to get the “green” message out. Yet her unwillingness to alter her activist mindset frustrates those who want to build the Greens into an organized political machine capable of delivering seats.

David Cotter, president of the Kitchener-Conestoga Green riding association, likes and trusts May. Still, he put his name on the leadership-review petition. (Post-election, Cotter also briefly set up a website emaygoaway.ca but took it down after a friendly chat with May.) “[Former Green leader] Jim Harris ran a $60,000 campaign in 2006 and got 4.5 per cent of the national vote; we ran a $4-million campaign and won 6.8 per cent,” he says. “You have to have 12 seats to be an official party: we have none. You need one seat for the leader; she chose to run against someone who can’t be beaten.”

There’s residual anger among those who believe May advocated voting strategically to block Conservative victory in certain ridings. In early October May told Maclean’s: “It’s dishonest to say voters should vote Green no matter what because the best thing in terms of the environment is for Stephen Harper not to be elected. At the same time I wouldn’t disown my own party because my candidates are great.”

Confusion existed, says Ottawa Centre candidate Jen Hunter, whose own mother was repeatedly asked: “Who is Elizabeth saying we should vote for?” Some Green voters who defected from the Progressive Conservatives ended up voting Conservative, says Cotter, among them his own mother. “This is the big irony,” says a party member. “At the end of the day the Green party paid but the Liberals didn’t benefit.”

There’s fury that muddled messaging cost the Greens financially: each vote earns the party $1.95; candidates who achieve more than 10 per cent recoup 60 per cent of expenses. “We were one of the 39 ridings that got more than 10 per cent,” says Cotter. “But there are 19 ridings that got between nine and 10 per cent.” Those who took out loans expecting 10 per cent are now in debt, he says. Based on Globe and Mail poll numbers before the strategic voting flap in the election’s last week, he calculates the Greens would have brought in another $955,452.

Frustrations ran particularly high among Ontario candidates, given that limited party funds were deployed to perceived “winnable” ridings, such as deputy leader Adriane Carr’s in B.C. (she came in fourth), as well as May’s in Central Nova. “A lot of expectations weren’t met,” says Erich Jacoby-Hawkins, who ran in Barrie, Ont. “We had to do a lot for ourselves. Now we have to look at where in the system those failures happened and how to ensure we have support next time.”

Mike Nagy, who ran in Guelph, Ont., and was considered one of the best hopes for a seat, isn’t running in the next election. The “Vote Green” message was not clear, he says: “The purpose of the Green party is not to oppose one party or another party. The purpose of the Green party is to elect Greens.” He believes the party could have done better. “I think we’ve learned a lot from this and I’m sure Elizabeth has too,” he says.

May admits it has been a learning experience, but blames the press for misquoting her: “The media tends to spin and distort what I said,” she says. She also expressed frustration with her own party post-election, after an email her daughter, Victoria Cate, sent to several candidates in Ontario and Quebec was posted on emaygoway.ca. The 17-year-old, who campaigned with her mother, asked candidates for their input on how a Harper victory could be prevented: “If you are at all willing to consider measures that could be taken to ensure that our Prime Minister is not a man who believes Kyoto is a socialist plot, I would be grateful for your thoughts and your suggestions,” she wrote, noting: “I feel we have a moral obligation not only to advance the best solutions and ideas, but also to espouse the values of meaningful progress over political gains.” The language seems to suggest candidates either drop out or concentrate on working against the Tories to avoid splitting votes.

Jacoby-Hawkins, who received the note, was surprised by it. It came amid talk of two Green candidates in Quebec throwing their support behind Liberals. After a short email exchange with Victoria May, he continued his strategy to target “small c” conservative voters unhappy with Harper. In an email to candidates and organizers May vented her anger that the email had been posted on the Internet: “Using my daughter’s emails against me is so low I wonder what party I am in,” she wrote. After learning that Maclean’s had inquired about her daughter’s email, May sent a lawyer’s letter threatening legal action should any story suggest that she had ghostwritten it. She says the email was written without her knowledge or permission and refuses to discuss it. “It’s none of your business,” she said to Maclean’s. “My daughter is not part of your story.”

Such internal drama diverts attention from the party’s need to build infrastructure, beginning with a full 308 EDAs. “They’d see a 33 per cent increase in vote just from that,” says Mark Taylor, a former federal council member who observes the 41 per cent increase in Green support last election mirrors the increase in EDAs since the 2006 election.

The party needs a strong pyramid structure able to raise many people to the top, says David Chernushenko, a former deputy leader who quit the party after the election. “I see a very fragile silo right now. In fact, it’s more top heavy.” A repeated refrain is that the party needs to raise the visibility of faces other than May’s. “Elizabeth can’t be everywhere,” says Jacoby-Hawkins.

A stronger organization will provide checks and balances, says one candidate: “We could have put more pressure on Elizabeth to run in a more winnable seat. We would have been able to nominate our own candidates rather than have them appointed by the party.”

The executive needs to adopt a more political, less activist approach, says Taylor, who was elected to a two-year federal council term but quit after six months. “I was attacked for bringing a business mindset,” he says. “People would say ‘You’re just not Green enough, Mark.’ I was not seeing the sort of openness to criticism, to debate and to consultation that to me was a key element of what makes the Green party far different than other parties.”

“You do get a lot of ’70s-style rhetoric at the top,” says one female candidate. “It’s the rhetoric of feminist utopias: how this is going to be a society based on sharing, caring, and co-operation. Anytime anyone questions anyone, they’re told they’re too competitive or aggressive. It doesn’t attract women but it definitely drives away some men.”

Despite the internal bickering, May remains the Greens’ best hope, says Christopher Bennett, a former council member. “She has her enemies in the party but she is the one to guide them through another election—she has the personality, she polls very well,” he says. May dismisses the notion that there’s dissent in the party, claiming her support stands at 95 per cent. She says she’s committed to the party until the next leadership convention in 2010. She’ll run for the Greens in the next by-election, wherever it is, she says, though she remains convinced that Central Nova is winnable. She remains the defiant activist. Political games don’t interest her: “I will not join in mindless partisanship because I find it absurd,” she says, adding: “I’m very uncomfortable being like the other politicians who say ‘Vote for me, vote for me’ all the time and don’t have any sense of respect for voters. Voters can make up their own minds.”

FILED UNDER: Elizabeth May Green Party