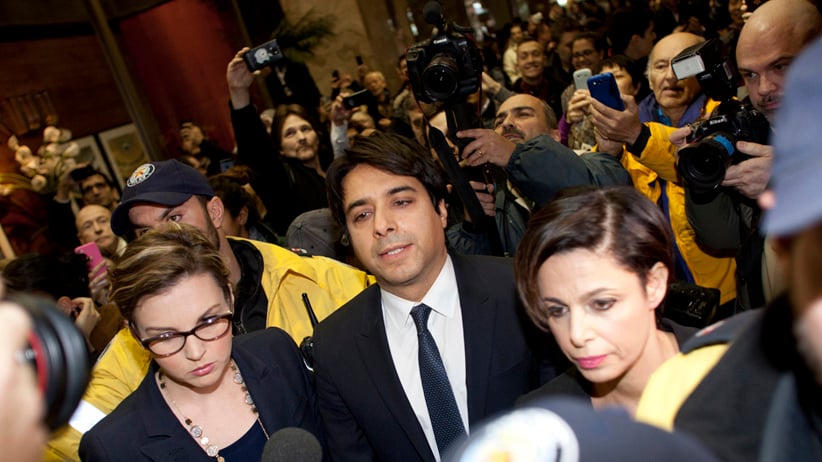 Jianenfreude reached its fevered pitch at 1:15 this afternoon when disgraced CBC radio host Jian Ghomeshi faced the media for the first time since the near-hysteria surrounding his spectacular descent from public broadcasting superstar began in late October.

The scene was frantic on the first floor of College Park following the former public broadcasting celebrity’s bail hearing in the courts above.

Standing at the top of a staircase with cameramen and reporters surrounding them 10 deep, Ghomeshi was silent, impassive, as his lawyer Marie Henein announced her client would be pleading “not guilty,” and that she would make no further statement. The case would be conducted in the court of law, not of public opinion or social media, she said.

For many the verdict was already in: “Why did you do it, Jian?” yelled one bystander. Another called out of “Rapist!” Someone else: “Go back to Iran.”

Social media had been fermenting with similar sentiments since news of the charges — four counts of sexual assault, one of overcoming resistance (choking) — were announced by Toronto Police at 10:35 that morning. But seeing the visceral response of living, breathing human beings in a public space brought mob mentality to life, horrifyingly so. It wasn’t difficult to make connections between Princess Di leaving Paris’s Ritz on that fateful August 1997 evening, or the scary scene in which Brad Pitt and Angelina Jolie were swarmed by paparazzi at TIFF several years ago.

Ghomeshi and his lawyers, surrounded by police, made their way through the surging throng to a waiting SUV. A media helicopter circled overhead, presumably waiting for the Canadian equivalent of OJ’s Bronco chase. In the bustle, a reporter dropped a microphone in front of Ghomeshi, who leaned over to pick it up, a needed reminder that he still is human.

Less than an hour earlier, the scene under the glare off fluorescent bulbs in courtroom number 509 in College Park reeked of the procedural. Sitting in a glass-walled prisoner’s box, Ghomeshi looked like a wax replica of himself in black suit and white shirt with the top buttons unbuttoned; he’d been spared the indignity of handcuffs. Clean-shaven of his usual well-tended facial stubble, he looked straight ahead as the Crown outlined the five charges against him based on the allegations of three women.

He listened to allegations of vicious, heinous behaviour without registering any emotion.

The judge agreed to the Crown’s request that two of the women’s names be subject to publication ban; the third woman to make allegations, actress Lucy DeCoutere, went public with her allegations against Ghomeshi in November. All of the allegations date to 2002-03 when Ghomeshi was the host of Play, an arts program that aired on CBC cable channel Newsworld.

Related reading: A national conversation about assault has begun. Finally.

Henein alluded to the rampant gossip that surrounded her client, when he said, contrary to rumours, he had been in Ontario since Nov. 4. And there he will stay, the court announced, pending his next court appearance on Jan. 8. At one point Ghomeshi looked into the crowd where reporters scribbled, typed on their phones and sketched his image.

His family, all in black, sat in the front row―including his  sister and mother, the one to post the $100,000 surety bond that was one condition of his bail.

With Heinen standing beside the prisoner’s box, Ghomeshi stood to say he understood the conditions of his release-passport surrender, not contacting his accusers, living with his mother, not purchasing firearms. “I do,” he said.

Watching Ghomeshi, I thought of all of the other times he’d been to College Park not to the bleak second-floor courtrooms, but higher up, to the Carlu on the top floor, a space used for galas and award shows. He’d been there last year when he was still a much-in-demand celebrity emcee, conducting an on-stage interview for the National Business for the Arts awards. Then he was used to being on the other side of reporters and flashing bulbs, only then the cheers were adoring.

Related reading: Is it any wonder we don’t report?

As cameras awaited on the first floor, exploding every time a door opened (one reporter said it made her feel like the best friend who was mobbed by paparazzi in the movie Notting Hill), I watched Ghomeshi leave the courtroom, between Henein and another female lawyer. Yellow-jacketed police walked in front and back of them. The hall was empty.

Toward the elevator Ghomeshi walked down a corridor to the left. He had put on a tie. I wondered if he had been asked to surrender it by police during arrest as an object seen as potentially harmful along with belts and shoelaces only to have it returned when released from custody. If so, the protective gesture seemed quaint, given the mob that awaited below.