B.C.'s anti-pipeline premier wasn't around to stop a joint statement that sounded decidedly pro-oil—in a mealy-mouthed, premiers'-summit kind of way 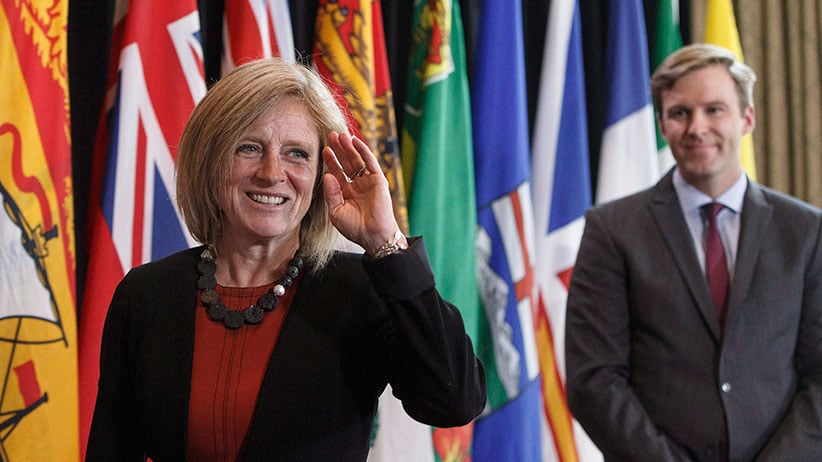 Rachel Notley, with New Brunswick’s Brian Gallant: the Alberta premier was all smiles after her colleagues issued a joint communiqué that called for efficiency in approval processes for resource development projects (Jason Franson/CP)

In the news release to mark the end of the 2017 premiers’ gathering, there was a striking footnote mark after their first word, premiers1. It qualifies that B.C. Premier-since-yesterday John Horgan didn’t attend. A few paragraphs down, the upshot of his absence was laid bare: a statement on environmental approvals of energy projects that would surely make Horgan wince, send B.C. Green Leader Andrew Weaver into conniptions, and make oil-province premiers Rachel Notley and Brad Wall smile as though B.C.’s government wasn’t suddenly anti-pipeline. This communiqué stresses that environmental reviews should focus on projects one-by-one, avoid “unnecessary duplication or delays in the responsible development of Canada’s natural resources” and “ensure regulatory certainty and timely decisions”—quite Alberta- and Saskatchewan-friendly language. And it’s unlikely Horgan would’ve accepted that in a premiers’ joint statement, having previously decried as a “flawed process” the National Energy Board review that recommended the Trudeau government approve the Trans Mountain pipeline.

Horgan could have rescheduled Tuesday’s swearing-in of himself and cabinet to avoid a conflict with the premier’s annual summer retreat—though B.C.’s wildfires would likely have kept him from travelling out of province, anyway. Regardless, showing up evidently matters, and not doing so has consequences, such as handing a significant victory2 in the pipeline long war to Notley. This second footnote signifies that this is a victory only when pro-rated for the universe of premiers’ conferences—what’s measured with a yardstick within the conference hall would register on a micrometer in the real world. This approvals statement amounts to the premiers recommending the Trudeau Liberals not change the status quo much on environmental assessments for projects. Horgan could just as easily come out next Wednesday and declare loudly his own position on the National Energy Board, but if nothing else the premiers have sent a message that the nine other provinces and three territories basically think otherwise.

READ MORE: Is a premiers’ summit worth boycotting?

For premiers’ summits, failure usually means nothing happens; success is when they’re able to hint that something more meaningful than nothing might just happen in the future, or at least that leaders will continue to consider the possibility of future action. Manitoba Premier Brian Pallister was standing at every one of his six feet, eight inches at meeting’s end, visibly proud of his Great Nudge Forward. He declared at the conference opening he wanted Ottawa to delay marijuana legalization by a year rather than making next July 1 Cannabis Day. Other provinces at first said they were contentedly working toward the federal target, which Trudeau insists on keeping. But at meeting’s end, they agreed to brandish the preferred premiers’ conference weapon: the Provincial-Territorial Working Group. If this group reports back by November that the federal government has done too little to help provinces get their laws and regulations in place, then the provinces will demand an extension to the marijuana legalization date.

“The prime minister wants to stick to his deadline, that’s super-duper,” Pallister said, before shifting to what in premier-conference-speak translates into tough language. “He needs to then hear what the premiers of his country, our country, said they need help with.”

There was some vague, aspirational talk about the harmonized cannabis regulations across the Atlantic region, as well as across the Ontario-Quebec line—at these events Kathleen Wynne and Philippe Couillard increasingly finish each other’s sentences. Couillard even suggested a common legal age for pot use between the two provinces, even though drinking is 19 in Ottawa and 18 across the bridge in Gatineau, Que. “Imagine the kind of traffic you would have if the age of (cannabis) consumption was different from one side of the river to the other. Not ideal I would say,” Couillard remarked (though, for the record, University of Ottawa and Carleton first-year students in my day happily taxied to Quebec bars without causing intolerable Friday night traffic congestion; I’m sure it’s no worse today). Of course, in this case there’s that great, counterveiling muffler of government action: ongoing public consultations, which defer any such decisions.

Wynne came into the Edmonton summit urging others to replicate her Ontario pharmacare plan; she emerged with: “premiers also agreed to continue exploring opportunities to improve drug coverage.” Couillard treated counterparts to a breakfast discussion about his bid to start new constitutional talks, and at least those colleagues publicly praised him and refrained from criticizing the idea.

The Saskatchewan delegation, meanwhile, wanted a denunciation of Ottawa’s threat to deny provinces access to a green fund if they don’t impose their own carbon taxes. But the language about provincial turf and funding is so vague that it approaches clarity only if you stare at it like you might a 5-D optical illusion (hey, that looks like a clean-coal plant popping off the page!). When it came to opioids, which the absent B.C. delegation urged onto the agenda, there was talk of sharing best practices in harm-reduction approaches, and requests for more RCMP support on intercepting drug imports; again, had hard-hit B.C. been present, the language might have been more urgent.

Premiers have their reasons for not agreeing on everything—they have differing political bents; face different fiscal challenges; represent different regional attitudes and cultural values; promote distinct economic bases. They can best find common cause with a common target or threat from without, and they showed in Edmonton their skill in reciting the same talking points while showing relative unity on the NAFTA negotiations. Most often they come together to collectively ask for a few more cargo containers of federal cash.

A reporter asked if they couldn’t just hold these sorta-ineffectual meetings by Skype or phone. Notley, who chaired this year’s summit, said doing so online “would have been a nightmare that I would have run screaming from.” They like building relationships, developing rapport, and they insist that even these mealy-mouthed compromises would be hard to achieve without meeting in person.

After all, you’ll never run down field the whole 100 centimetres if you don’t make it into the stadium.