Justin Trudeau and the role of a lifetime

Trudeau's town hall performance highlighted his skill as a pitchman, and the surprising ease with which he has slipped into the job of PM 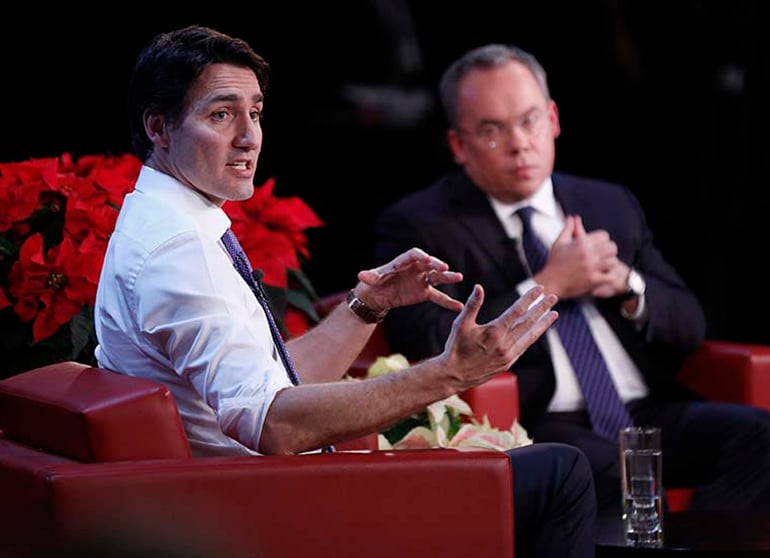 Justin Trudeau is everywhere. It has reached the point where you flip on the TV and half-expect to see the new Prime Minister hosting Hockey Night in Canada, or performing the role of Clara in a holiday production of The Nutcracker.

He hobnobs with world leaders, cheerfully greets Syrian refugees at the airport, poses sexily in the pages of Vogue, makes moist-eyed pledges to rebuild relations with the country’s Indigenous peoples, and geeks out to the latest Star Wars film.

There will come a time when this is all too much. But it’s nowhere in sight.

The latest polls suggest that somewhere around two-thirds of Canadians approve of Trudeau and the blizzard of initiatives his Liberal government has let fly since winning power Oct. 19. And that’s in no small measure due to the PM’s impressive range and skill as a pitchman.

It was casual Justin who showed up at the Maclean’s Town Hall on Wednesday, without a suit jacket—sleeves rolled-up, top-button undone, tie loosened, and legs crossed down at his stripey-socked ankles. The question-and-answer session with journalists and members of the public is the kind of thing that the Liberal leader is particularly good at, a showcase that allows him to hit all of his grace notes, from serious to silly. There was heartfelt empathy in response to an Indigenous woman who shared the story of missing female family members. A deft repudiation of Trumpian politics that skirted preachiness and cross-border sensitivities. And a whole bunch of awkward references to The Force Awakens.

Trudeau even gave a defence of his ubiquity.

“It’s not about image, it’s about substance,” he said. “If you want to serve Canadians well, with the kinds of things that they want to see for themselves, their families, and their future, then you have to listen to them. You have to get to know people. You have to be engaged in real conversations and talk about their hopes and dreams for the country.”

He probably believes this: perhaps even deeply. Really, why wouldn’t he? For him, it works.

The single great insight behind Barack Obama’s successful campaigns to win the Democratic nomination, and then the presidency in 2008, was that change should never be incremental. If you want to set yourself up as the alternative in politics, you need to be as different from your opponent as you can possibly be.

Trudeau won in October because he was the anti-Stephen Harper. His early popularity as PM is thanks to more of the same, both in policy and style. Trudeau embraces the touchy-feely aspects of the job that his reserved predecessor so clearly loathed. He hugs and kisses, bestows backslaps and double-pump handshakes, and, when required, can demonstrate the full spectrum of human emotion.

If there is a surprise in all this, it’s how easily Trudeau has slipped into the role of Prime Minister. Yes, he spent his boyhood understudying. Yet, he was hardly a grand success as Liberal leader. Underwhelming in the House, overmatched on the issues, and with an unfortunate tendency to let his mouth run ahead of his brain.

He and his advisers struggled to find a balance, turning down his natural goofiness and playing up his slow-talking seriousness. But it never seemed like a comfortable fit.

It’s hard to say at what point it all clicked. When they stopped worrying about him being painted as “not ready” and started believing he was.

What Canadians are seeing right now is the real Justin Trudeau. Uninhibited, overjoyed to be at centre stage, and truly bien dans sa peau. It’s not an act, but it is a hell of a performance.

Unpleasant memories of Stephen Harper will eventually fade, and familiarity will breed contempt for the new guy.

At the moment, however, it’s all kind of charming. Even the bit where he puts his hand on his heart like he’s doing yoga in a Wes Anderson film.

Just so long as he doesn’t sing Hey Jude.