During the Maclean's Town Hall, Justin Trudeau served up some strong political jabs against Donald Trump. Here's why that's a risky game. 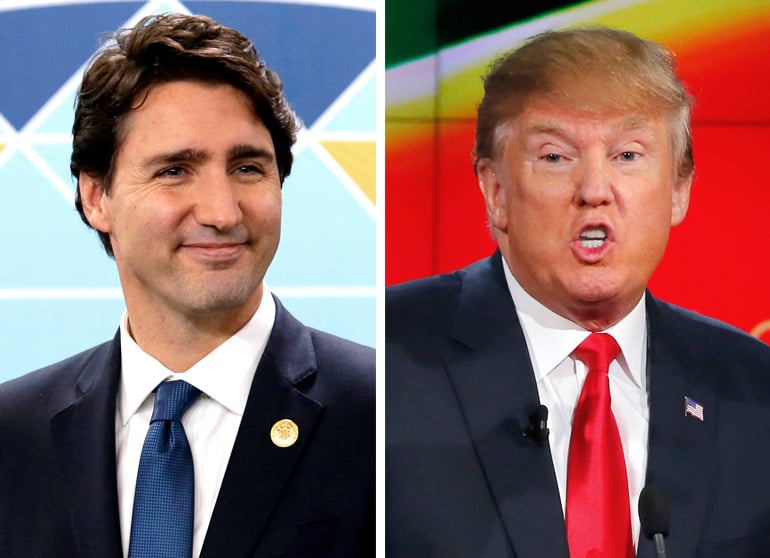 That was one thunderous “however.”

Having acknowledged the importance of keeping his oar out of foreign election campaigns, Prime Minister Justin Trudeau signalled with that word he was dropping the fig leaf of impartiality, and promptly took a swipe at U.S. presidential hopeful Donald Trump.

“I don’t think it comes as a surprise to anyone that I stand firmly against the politics of division, the politics of fear, the politics of intolerance or hateful rhetoric,” Trudeau said during a live, year-end town hall hosted by Maclean’s. “If we allow politicians to succeed by scaring people, we don’t actually end up any safer. Fear doesn’t make us safer. It makes us weaker.”

Trudeau was responding to a question from a voter sent by social media, who asked whether the newly elected PM would “stand up to Trump and condemn his hateful rhetoric.” At first, it looked like Trudeau would demur. “It’s going to be important for Canadians, for Canadian jobs, for Canadian prosperity,” he said, “to be able to have a positive relationship with whoever Americans choose as their president.”

Then came that big “however.”

Without addressing Trump by name, Trudeau said leaders should respond to recent terrorist attacks by focusing on “keeping our communities united, instead of trying to build walls and scapegoat communities. And I mean to talk directly about the Muslim community. They are the greatest victims of terrorist acts around the world. Painting ISIS and others with a broad brush that extends to all Muslims is not just ignorant, it’s irresponsible.”

His spinners will no doubt characterize his remarks as abstract observations. But there was no mistaking where Trudeau was going. By that point of the broadcast, he’d already spoken glowingly of his conversations with current President Barack Obama, whom Trump has set up as a craven weakling whose very credentials as a native-born American are, to Trump, in question.

Trump’s call for a temporary ban on Muslims entering the U.S., meanwhile, flies in the face of positions Canada’s rookie Prime Minister staked out during his own campaign, opposing Conservative promises for bans on religious veils during citizenship ceremonies while promising to land 25,000 Syrian refugees in Canada by the New Year (he’s stuck by that number, but backed off on the ambitious timeline).

In short, the prospect of a Donald J. Trump presidency clearly doesn’t appeal to Trudeau. So on Wednesday, he played as close to the line as he could without saying the man’s unfit to lead the democratic world. Judging by the favourable coverage Trudeau’s election has been getting in the U.S. press—where his “sunny ways” are offered as an alternative to cynical American politics—his words won’t pass unnoticed.

But this is a risky game. For starters, attacks from liberal politicians outside the U.S. have to date only provided Trump with oxygen, so Trudeau’s innuendo may prove entirely counterproductive. What’s more, Trump’s surging popularity in the Republican nomination race raises the very real prospect that he will indeed nab the ticket, and possibly the presidency. Imagine, then, the atmosphere around those neighbourly visits in Ottawa and Washington. Awkward seems an inadequate word.

Another, more practical, concern for Trudeau: such criticism inevitably turns the spotlight on his own handling of the fraught security file. During the campaign, he struggled to appear protective of both Canadians and Canadian rights, especially when pressed on the Liberals’ support of Bill C-51, legislation passed by the Harper government giving sweeping new powers to intelligence agencies and police to disrupt terrorist plots.

He promised to modify the bill’s more invasive provisions, and create a parliamentary body to oversee the activity of Canada’s security agencies. But on Wednesday, when a questioner in the audience asked what he would do to protect civil liberties, Trudeau steered back toward the middle, if anything, emphasizing the security side of the equation.

The new parliamentary panel would “ensure not just that our investigative agencies aren’t abusing people’s rights,” said Trudeau, his voice rising, “but also to make sure those agencies are doing everything they possibly can to keep Canadians safe.”

When will such a panel will be created? Who will sit on it? What powers will it have? What legislation will guide it? What changes, if any, will be made to the Conservative legislation beforehand? All those things are yet to be decided. Compared to serving up political jabs, it’s dauntingly hard work.