Foreign policy? Leadership skills? No, the rest of the world cares about what's on Justin Trudeau's feet. 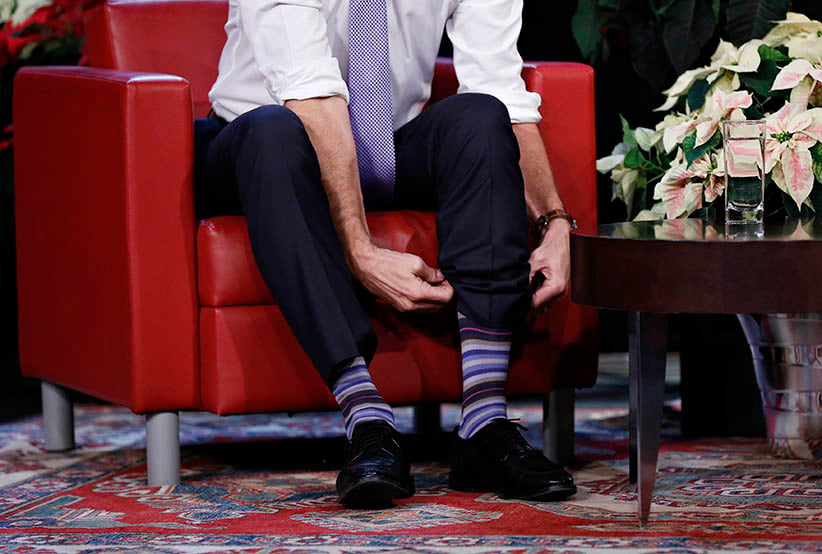 Update, April 19: This just in from the interweb … GQ magazine has included Justin Trudeau on its list of the 13 Most Stylish Men in the World Right Now. (The capital letters are theirs.) Notes the magazine: “He’s a world leader with style. Thanks to an arsenal of fitted (by politician standards) suits, a mane of hair that would make Jon Snow jealous, and the ability to actually have fun with his wardrobe—striped socks, anyone?—this Canuck is proving that leading well and dressing well aren’t mutually exclusive.”

Dec. 23, 2015 — The international media’s aesthetic obsession with Canada’s Prime Minister quite literally runs from head to toe. It starts with his “long, flowing locks” (U.K.’s The Independent) and now, as seen in a recent GQ article, goes all the way down to his socks.

Justin Trudeau looks like a “Disney prince,” the men’s fashion magazine wrote, with one of the takeaways from the Maclean’s town hall last week being how he wore “an impressive pair of striped socks for the taping that, like his serious-but-still-charming personality, were professional without giving off uptight vibes.”

It’s a nod of approval from a fashion industry that has been gushing over the PM (in a way that at times seems worthy of an eye roll). And his sock selection indeed sets him apart, like the red socks with white maple leafs he wore at last month’s first ministers’ meeting in Ottawa.

The last time the foreign press was this excited over socks was, well, last year when George H.W. Bush’s eccentric selection was so popular, the Republican Party turned them into a giveaway item to solicit donations. And at least Canadians can be thankful Trudeau’s foot fashion doesn’t elicit the same kind of scandal that fell upon the U.K.’s Labour Party leader, Jeremy Corbyn, when he was photographed backstage preparing for a speech wearing red socks and (gasp) open-toed sandals. (A British survey from this year found socks with sandals is the No. 1 fashion faux pas for the summer.)

Trudeau’s challenge may be to stand out without stepping on anyone’s toes, so to speak. Research has shown that people not only bestow higher status on those with deliberate non-conforming behaviour—like wearing colourful socks while everyone else wears plain old black ones—but also perceive those individuals as more competent. And during his first few months as Prime Minister, Trudeau has been anything but similar to his predecessors.

When asked at the Maclean’s town hall whether his “charm offensive” is the right tone for the government, Trudeau responded that it wasn’t about image, but rather substance. “And that’s where, whether it’s talking to a broad range of publications in a lot of different ways, where we can actually connect with people who might not get a lot of politics in their daily reading or, or news, is a really important thing,” he said. “So the more I can stay connected with people, the less I run the risk that prime ministers run of getting disconnected from the very people you’re supposed to serve.”

Much like the clothing itself, media fawning over socks will soon wear thin. After all, it’s not as though the Prime Minister is meticulous in all parts of his footwear appearance. “I do like my socks,” he explained at the town hall, “but I give no thought to my shoes.”

Let the judging of his shoes begin.